In the haunting "Silent Land," a couple's seaside stay in Italy plunges toward a moral implosion 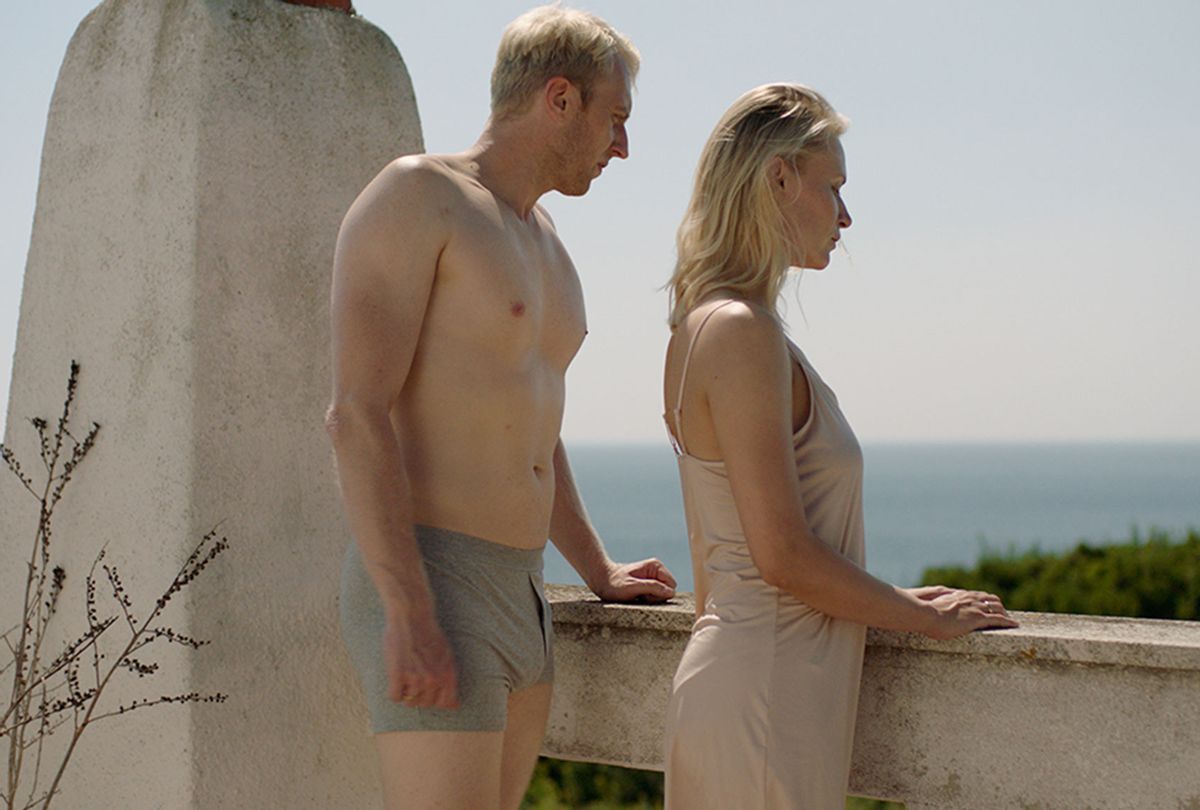 In the bracing Polish drama, "Silent Land," which is having its World Premiere at the Toronto International Film Festival, Adam (Dobromir Dymecki) and Anna (Agnieszka Zulewska) have rented a house by the sea in Italy. Little about this couple is known — how long they have been together, what their relationship was like prior to their arrival, or even what they do back in Poland. Writer/director Agnieszka Woszczynska shrewdly lets viewers make their own decisions about the characters. Moreover, she effectively uses her camera to provide clues about them as the story unfolds.

Adam and Anna are attractive and bourgeois. After they fill their fridge and unpack their stylish clothes, they are disappointed that the pool they wanted to use is not functioning. They contact their lessor, Fabio (Marcello Romolo), who hires a migrant worker to address the situation. Anna compliments Adam for being assertive in the exchange, a telling remark, no doubt. As the couple eat, dance, and even make love that night, there is an unspoken tension between them. Their emotions become heightened when the Arab worker dies in an accident — Woszczynska films this event brilliantly — leading to Adam and Anna being questioned by the police.

The local Carabinieri, however, are mostly unconcerned. The worker was probably not legally in the country, the couple are on holiday, and it was an accident (as even the security cameras confirm). Yet there is something that nags at Anna and Adam: Did their response, which was to call Fabio for an ambulance, deny the victim first aid? Could they have done something to save the man? Adam and Anna try to convince themselves (and others) that they "did everything they could" — when, in fact, they did almost nothing. It begins to splinter their relationship.

"Silent Land" certainly punctures Adam and his weak masculinity. One scene features him shaving his chest, signifying his vanity, not his virility. (Woszczynska frequently objectifies Dymecki). Anna does appear to be the more powerful partner. An early scene has her admiring the attractive, shirtless Arab worker only to be surprised by Adam. She scolds him for sneaking up on — really, catching — her. The characters are superficial, and, it is suggested, only really interested in the surface of things. Because beneath those surfaces lie much deeper, scarier traits that neither wants to admit or reveal.

Woszczynska's film is all about cool, undisturbed surfaces, and it is shot in a style that emphasizes emptiness and sterility. The couple's bedroom is practically monochromatic and drained of color. There is also minimal dialogue in the film. Adam and Anna rarely talk to one another. When one even says, "We need to talk," the discussion never happens. An early scene has Adam and Anna discussing renovations of some kind, but Woszczynska moves the camera away, as if uninterested in the conversation, to focus on the crashing waves from the sea nearby.

Water is an apt metaphor in "Silent Land." The couple, ironically, never use the pool that they wanted fixed. (Perhaps because it is tainted by the worker's death). Adam does take multiple showers, either to cool off, or to have some alone time. At one point, he jumps off a cliff, into the sea, as if expressing his pent up anger, self-loathing, and frustration.

Anna, meanwhile, finds herself interested in sea diving with Arnaud (Jean-Marc Barr, of "The Big Blue" fame), a local who takes her deeper and deeper below the surface. The friendship that develops between Adam and Anna and Arnaud and his partner, Claire (Alma Jodorowsky) provides some interesting exchanges. Adam and Anna lie to Arnaud and Claire when they describe the events surrounding the worker's death. In contrast, Arnaud recounts a story of a client who did a dive despite health issues, which Claire later confesses to Anna, was not completely accurate. The way the truth is bent to provide a comforting narrative (especially for the fragile male egos) is one of the film's most intriguing elements. These reveals force the viewer to work at who and what to believe and where one's sympathies should lie.

If "Silent Land" is deliberately ambiguous, Woszczynska's camera is unflinching. She scrutinizes Anna in a private moment as she cries following a police interrogation. Adam, too, has a breakdown in solitude, that rattles him. But there is something cathartic about these scenes which is why this film is so gripping. Viewers will absorb all of Adam and Anna's emotional body blows.

The performances are beautifully modulated. Agnieszka Zulewska exudes composure as she quietly fumes with resentment. One night, she gets pulled into a dance with some villagers and appears lost as she is carried away in the movement. It is a terrific visual for her perpetual state of being unsettled. In contrast, Dobromir Dymecki gives an oddly poignant performance as Adam, who seems stunned by all that has transpired. On a few occasions, Woszczynska films Adam in a dream-like state, wandering through the forest searching for something elusive.

In support, Jean-Marc Barr provides a lively, welcome distraction to the mostly somber couple as a man who embraces life and even a little danger.