HBO's anguished "Scenes From a Marriage" is so potent, your own relationship better be rock solid 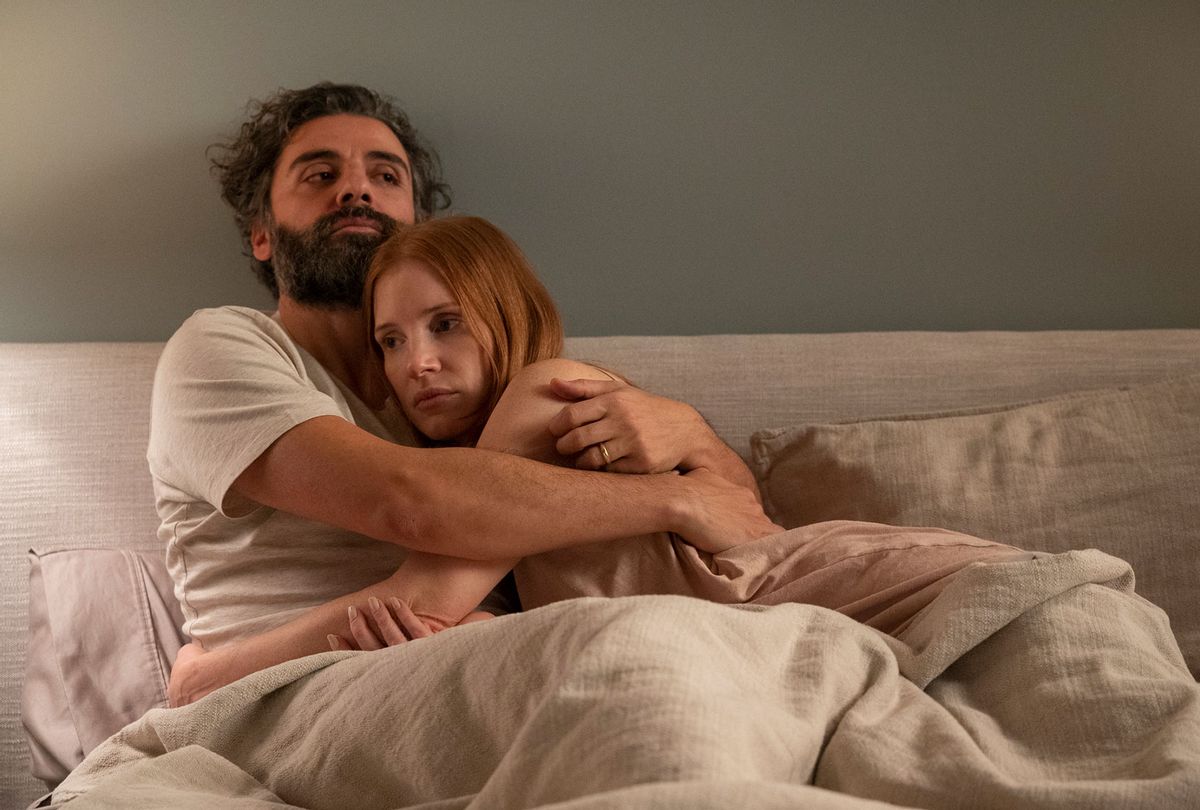 Four out of the five episodes of Hagai Levi's "Scenes From a Marriage" open with a handheld camera following stars Oscar Isaac and Jessica Chastain as they arrive on set with crew members rushing about, preparing for the scene. It's a bit reminiscent of a live performance in the way it captures glimpses of performers behaving like people getting ready for work, creating a division between reality and entertainment.

To some this will surely hit as a precious meta flourish meant to emphasize the seriousness of this artistic undertaking, and on some level that view has some merit. Levi's remake of Ingmar Bergman's influential 1973 series would work equally as well without these sequences; it's not as if anyone watching would conflate Chastain with her character, Mira, or assume Isaac is anything like Jonathan, Mira's husband, although he's tailor-fit for the actor.

But given the fuss made over a viral moment in which Isaac appeared to kiss Chastain's arm on the red carpet at the series' Venice International Film Festival debut, maybe establishing a split between life and performance isn't the worst move.

Nowhere is it clearer that these actors are jumping into the skins of fictional people than in the seconds after you hear someone yell, "Action!" In "Scene I: Innocence & Panic," Chastain seamlessly flips the switch in becoming Mira, whose exhausted uncertainty shows through as she furiously sends a text.

Chastain has Mira don another mask as she sits down next to Isaac, already in character as Jonathan, in their living room. The couple has agreed to sit for an interview with a Ph.D. candidate writing a paper on how evolving gender norms are impacting monogamous marriages. The resulting conversation reveals how Mira and Jonathan met, how they define themselves as individuals and, importantly, the fact that they've been together for 10 years and have a daughter.

What Isaac and Chastain say without words explains far more about these two. Mira, a tech executive, is chilly and disconnected for most of the interview, rarely making eye contact with the interviewer. Jonathan, a philosophy professor, does most of the talking for Mira, assuming he speaks for both and floridly mansplaining his way through each interaction.

Soon afterward we see them sharing a dinner with another couple (played by Nicole Beharie and Corey Stoll) that has opened their marriage, and whose relationship is obviously imploding. But every union has a timed explosive hidden in its guts. What each couple does with that bomb tends to determine whether they'll go the distance. Reset the timer or defuse it, it will always be there until it goes off.

In the process of watching these situations unfold, one may arrive at another interpretation of Levi's device, and what it conveys about relationships in the context of this story.

It posits that any partnership that survives the wane of a young relationship's lustful fever settles into some version of role-playing. Everything that happens to Mira and Jonathan's union after that first hour demonstrates our tendency to cast one another into these parts, regardless of whether the bonds we create remain intact or snap. This also applies to everything around them, as Mira points out – people develop silly attachments to furniture and dream up a myth of a home. "Our whole relationship became an object," she says to Jonathan in delivering her diagnosis of their break, one of many.

This doesn't make witnessing the slow dissolution of Mira and Jonathan's marriage any easier to witness. On the contrary, it accentuates the sting of what transpires in front of our eyes because of the concentrated humanity Isaac and Chastain conjure forth in their portrayals.

These actors excel in presenting two people who cannot help but hurt each other whenever they're in the same room, whether intentionally or by accident, purely because they know one another so thoroughly. They're also achieving this while largely avoiding the trap of making either Mira or Jonathan easily despicable, even the party who instigates the separation.

Levi, who previously created "The Affair" for Showtime, approaches his "Scenes" by employing American mores and personalities to the figures Bergman established, much in the way his creation for Israeli TV,  "BeTipul," was remixed into "In Treatment."

The casting shows this, capitalizing on Isaac and Chastain's proven chemistry. (In addition to knowing each other since college, they previous played a husband and wife in 2014's "A Most Violent Year.") They credibly weave between warmth and chill in portraying Mira and Jonathan's conundrum, that of a pair that doesn't work together but can't entirely live without each other. As in the original, they vacillate between amity, disdain and physical outbursts in the same episode.

The main difference, perhaps in an effort to heed the feminist critiques that dogged Bergman in his day, is that Chastain's character is the one with the stressful career and the larger paycheck. Isaac's Jonathan is the main caregiver to their child Ava (Lily Jane) while still demonstrating all the attention-grabbing tendencies of self-aggrandizing male intellectuals.

The majority of "Scenes From a Marriage" takes place in Mira and Jonathan's very lived-in home and features Chastain and Isaac on their own, playing off one another. Through the scripts Levi and his collaborator Amy Herzog, who co-wrote two episodes, create such a level of intimacy that, when placed hand in hand with the work's pervasive cinematic realism, they sow seeds of palpable discomfort.

That's part of the trick Bergman pulls in the original and Levi remakes for today's audiences. We're made to experience the awkwardness our central couple feels as they witness another marriage rupturing in their presence.

That's over in a few minutes for the audience, and it's as much of a show for us as it is for them. The rest of "Scenes" intentionally places us inside Mira and Jonathan's messiness, capturing their escalating anguish through solemn tracking shots hovering behind them as they stagger from room to room and in agonizing close-ups placing us a breath away from a twitching muscle. A bedroom intimacy blankets the entire work except with none of the relaxation that term typically implies.

Whether one experiences Bergman's original as a six-part series or the two hour and 49-minute film into which it was eventually edited, its seminal means of distilling marriage down to its essence is unparalleled. Few movies don't draw from it in some way; even filmmakers who claim they don't are likely influenced by those who do, like Woody Allen. Recent works like Noah Baumbach's Marriage Story" are overt homages, while Lena Waithe-centered recent chapter of "Master of None"  titled "Moments in Love" is a direct lift.

A main distinguishing element between Bergman's scenes and Levi's is the original's relative gelidity, although its Scandinavian palette could be unduly influencing that impression. Still, the director emphasizes a spare feel in its presentation.

Because of this the clinical approach Erland Josephson's Johan takes to breaking the heart of his wife Marianne (played by Liv Ullmann, Bergman's former partner) enables the audience to adopt a position of distance while simultaneously inviting them to examine their own love lives.

Nevertheless, like a loving gesture that a relationship's long years transforms from a heated compulsion into a reflex, there are times in which this adaptation feels as if it's going through the motions, albeit very prettily. You don't have to have viewed the original to feel like you've already seen this story since it's highly likely that you've enjoyed or endured one of its descendants. HBO has made a few of them.

Just because a story is familiar doesn't make it worthless, of course. Watching Isaac and Chastain impressively tango, spar, and exchange carefully choreographed fireworks displays is enough of a reason to take in "Scenes From a Marriage." Mira and Jonathan's breaking home provides an excellent stage to showcase their talents, especially in the third episode, easily the best of the series.

Before you do that, ask yourself how well you know your own partnership and yourself. One footnote in the original series' legacy was that it was blamed for a spike in Sweden's divorce rate around the same time as its debut, rather than reflecting what was already taking place in society.

The new "Scenes" arrives at a time when relationships are being tested by a pandemic that's simultaneously closed us in and separated us from others. Some may see parts of themselves and their fragility in Mira and Jonathan's cyclical push and pull, sounding a warning they may not want to deal with right now.

If not that, at the very least "Scenes From a Marriage" leaves no doubt that the stars' viral red carpet moment was anything other than platonic. Nobody will watch what transpires on screen between them and be left with the impression that there's anything brewing here, besides two people giving all that they have into the bittersweet telling of how painfully some love stories end.