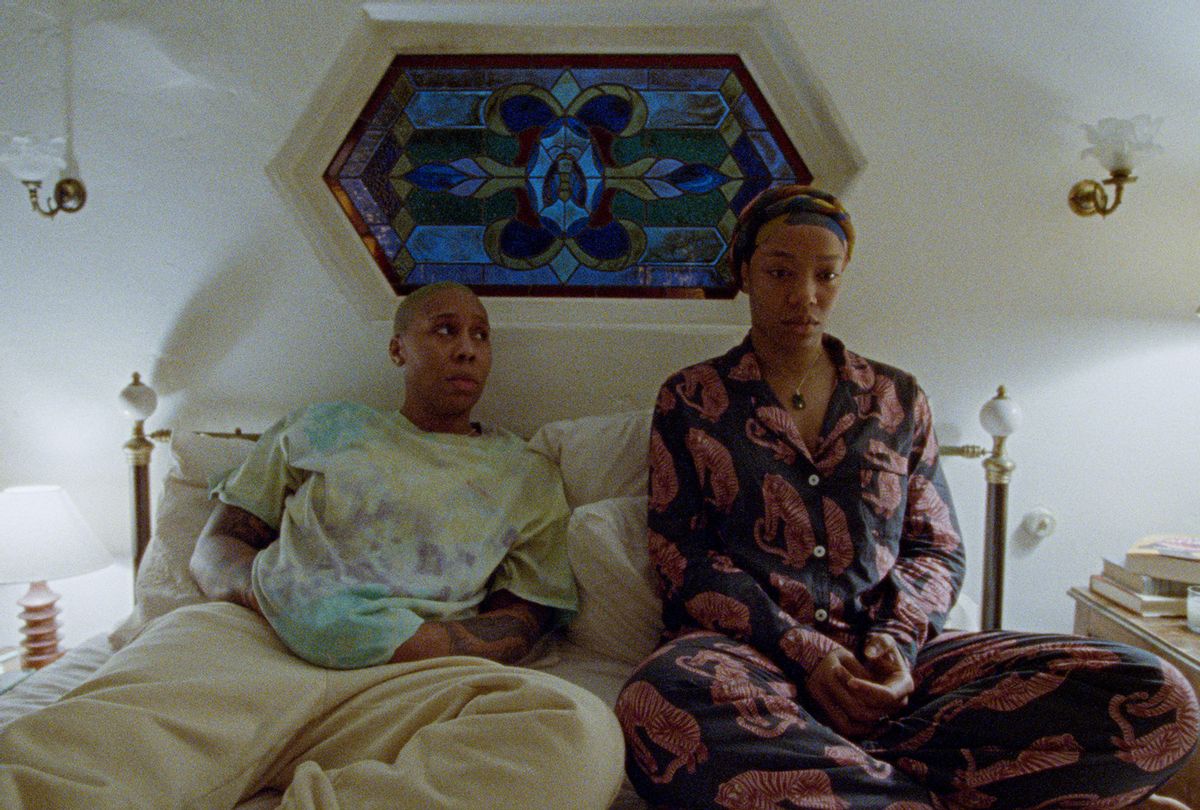 Every show worth closer consideration contains at least one universally striking scene that invites many interpretations. The third season return of "Master of None" has a number of them, but for me the "burger in the car" scene says a mouthful without Lena Waithe's character Denise speaking a word.

She's parked on what looks to be the side of a country road, her profile framed by a fenced-in field carpeting the scene outside the passenger-side window, chewing intently while being serenaded by a recording of Jessye Norman's performance of Erik Satie's "Je Te Veux." Waithe's presence is pretty subdued as actors go, but her muted expressiveness conveys what she's feeling – the food, the music, the stolen roadside interlude – by way of a couple of quick nods and intense chewing.

Anyone who has been in a relationship, be it familial, platonic or romantic, can recognize this moment for what it is — which is why cinematographer Thimios Bakatakis situates his lens to witness this scene without a perspective change, unblinking. A lot of us have been in Denise's seat, devouring our feelings and grasping at reliable goodness despite some disaster waiting for us at home, sitting in our kitchen.

When "Master of None" braids banality with the transcendent in this way, it has few peers. That may be why the new season's sudden announcement a month before its debut was met with more curiosity than resistance.

Four years have passed between the show's second and third seasons, and in the intervening time Aziz Ansari was accused of sexual misconduct in January 2018, which he addressed in 2019 by way of stand-up special-slash-apology tour.

Resurfacing "Master of None" with little notice tacitly acknowledges that while Ansari isn't completely radioactive, there will always be people who are done watching his character Dev's ongoing quest to find love, a viable acting career and the perfect plate of pasta.

But this was never expressly Dev's or Ansari's show; he co-created it with Alan Yang and co-wrote season 2's Denise-focused, Emmy-winning "Thanksgiving" episode, with Waithe. Other people in Dev's world are as interesting as he is, if not more. The episodes that yielded the most conversation — like "Parents" from the first season in 2015 and "New York, I Love You" from season 2 — prove that.

Views that linger on the mundane slices of Denise and Alicia's day-to-day lives show us what that means instead of explaining it. Waking up and morning rituals, folding laundry as they dance to Black Box's "Everybody Everybody," laughing at a joke we never hear, all of these pauses make up the quilt that is their existence. Bakatakis and Ansari, who directs all these episodes, replace much of the dialogue with visuals like this, even telling the story of the couple's difference by gazing at the tables on their respective sides of the bed they share: Denise's holds kernels of popcorn and junk food wrappers. Alicia's has a cup of tea, establishing her as the fancy half, an aspiring interior designer. Denise adores Alicia but maybe doesn't entirely align with her desires, made apparent when Alicia announces she wants to become pregnant.

Dense and Alicia's tale plays out in more or less the same fashion as Ingmar Bergman's 1973 miniseries "Scenes from a Marriage," minus the intimate violence in its story. But the milieu "Moments in Love" creates is equally as spare and atmospheric, and the plot progresses as slowly and purposefully.

That methodical pacing pays off later in the season, but it plays as a slow-moving rift Ansari and Waithe widen a bit more with each new episode. That means watching the characters grope their way through melancholy, a feeling that doesn't translate to much physical movement and relies on the patient viewer to understand that.

But when it comes to stillness, anyone tuning in to "Moment of Love" is already familiar with Waithe's placid demeanor. Next to her Ackie's energy crackles, establishing Denise and Alicia as a beautiful pair as long as they're on the same page. When the paper rips, the resultant pain throbs and aches instead of screaming.

It would be wrong not to acknowledge that one person's notion of leisurely story progression translates to plodding and inert to others. Sometimes "Moments in Love" is a languid bake, and at other turns it drags. Oddly those scenes occur during the shorter segments, not the opening hour; subsequent episodes clock in anywhere from 20 minutes to the final episode's 52.

Ansari's Dev shows up in the premiere episode as one half of an unhappy couple that unintentionally highlights the fissures in Denise and Alicia's blissful snow globe of a life, and not long after his visit arrives the flood.  But Dev's uneasy cameo also reminds us that a little frenetic kick and humor is what made "Master of None" dance so well between humor and heartbreak in earlier iterations.  The second season does all that while incorporating the lovely longing intrinsic to Italian neorealism; it drifted, but never stalled.

"Moments in Love" accentuates yearning over injections of lightness, but maybe that is a reflection of both the characters' maturity and that of the show. Ackie's break-out episode is revelation because of the dynamism she brings to Alicia's struggles, hitting determined highs and collapsing in her lows as she faces down towers of fertility injections, diminishing probabilities, and the medical insurance industry's discrimination against LGBTQIA people.

One facet of life the series adroitly captures in its early seasons is the paralysis brought on by too much choice, the millennial's lament often mocked by older generations. Denise and Alicia's story illustrates the next part of the puzzle that everyone contends with, which is the sobering realization that one's options narrow with age and the passage of time. We lose touch with friends; we stop feeling so free; and responsibility, along with an awareness of mortality, begins to spiritually trap us either a little or a lot.

The season closes the book on this love story by striking what would otherwise be a morally questionable note but, having lived through Denise and Alicia's trials and sat courtside to their highs and lows, comes across as means of pulling solace out of life's burdensome mess.

It asks us to understand the flaws in these people we've been spending time with and forgive their frailties. Interpret that message as you will, but it doesn't take away from this season's accomplishment as legitimately inspired art.

"Master of None Presents: Moments in Love" debuts Sunday, May 23 on Netflix.