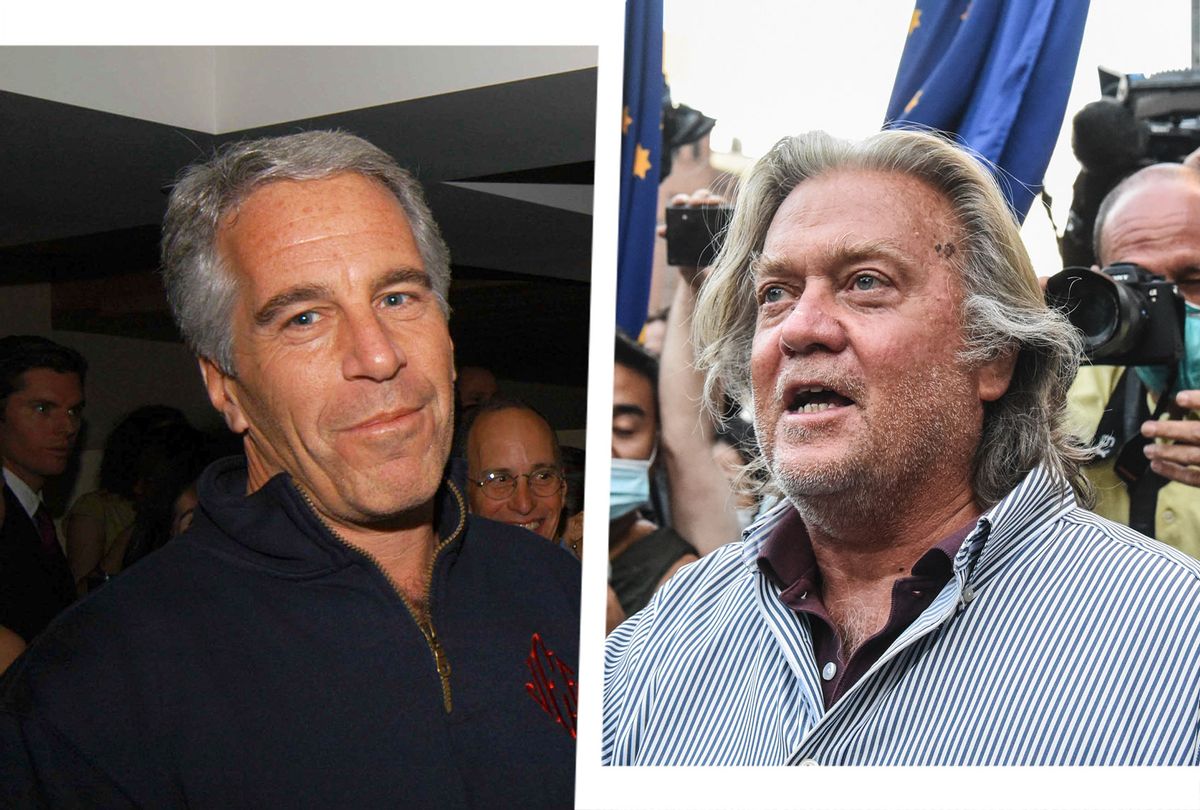 Former Trump adviser Steve Bannon coached convicted sex offender Jeffrey Epstein for a "60 Minutes" interview months before he was arrested on child sex trafficking charges, according to a passage from a new book by Michael Wolff first reported by The New York Times' Ben Smith.

Bannon conducted more than a dozen hours of practice interviews with Epstein in 2019, aimed at making the latter appear less "creepy" ahead of the interview — which ultimately never happened — according to Wolff's forthcoming book "Too Famous." Wolff is best known for his recent trilogy of books on the Trump administration, "Fire and Fury," "Siege" and "Landslide."

Bannon, who led former President Donald Trump's first campaign and briefly served as his chief White House strategist before being fired, in part because of critical comments he made to Wolff, encouraged Epstein to speak to "60 Minutes" and recorded more than 15 hours of practice interviews with him at his Manhattan estate, according to Wolff.

Bannon interviewed Epstein while giving him tips, such as urging him to avoid looking at the camera so he doesn't come across as "stupid" and "advising him not to share his racist theories on how Black people learn," according to the report. Bannon reportedly also told Epstein to "stick to his message, which is that he is not a pedophile."

"You're engaging, you're not threatening, you're natural, you're friendly, you don't look at all creepy, you're a sympathetic figure," Bannon told Epstein toward the end of the session, according to interview transcripts obtained by Wolff.

Bannon confirmed to the Times that he had encouraged Epstein to talk to "60 Minutes" and had recorded more than 15 hours of interview footage with the deceased financier, but insisted he had "never trained anyone." Bannon told the Times he had recorded the interviews for an "previously unannounced eight- to 10-hour documentary" that was intended to show how Epstein's "perversions and depravity toward young women were part of a life that was systematically supported, encouraged and rewarded by a global establishment that dined off his money and his influence."

It's unclear how Wolff obtained the transcripts, though the author told the Times that Epstein wanted him to write a book about him.

"He wanted me to write something about him — a kind of a book — it wasn't clear why," Wolff said.

It's also unclear how Bannon and Epstein connected. Epstein, a millionaire financier who regularly socialized with wealthy businessmen, academics and even former presidents, was arrested months later on federal child sex trafficking charges. He had previously pleaded guilty to soliciting a person under 18 for prostitution in a controversial and remarkably lenient plea deal involving infamous attorneys Alan Dershowitz and Ken Starr and future Trump Labor Secretary Alex Acosta, who ultimately resigned after new details of the Epstein deal were reported. Epstein later died by suicide in a Manhattan jail cell while awaiting trial. His alleged accomplice, Ghislaine Maxwell, has pleaded not guilty to charges that she recruited and groomed underage girls for him to sexually abuse and sometimes participated in the abuse.

It's not the first time Bannon has been linked to Epstein, a longtime friend of Trump's that the former president touted as a "terrific guy" who enjoys women "on the younger side." Page Six reported in 2018 that Bannon was seen entering Epstein's Manhattan mansion, where Epstein and Maxwell are accused of repeatedly abusing underage girls.

"Bannon needs money to bankroll his political agenda," a source told Page Six at the time, just months after Bannon had left the White House. "Epstein has plenty of money, and craves power and access."

Epstein's former butler at his Paris estate also claimed in 2019 that Bannon had stayed at Epstein's apartment in the fall of 2018, which a spokesperson for Bannon denied at the time.

New York Times columnist James Stewart also wrote in 2019 that Epstein invited him, Bannon and Wolff to a dinner in 2018 but it's unclear whether the dinner ever happened and Bannon has denied that he attended.

Wolff, who regularly writes about disgraced powerful figures, has his own extensive ties to Epstein. In 2003, the Times reported that Wolff organized a bid to buy New York magazine with investors that included Epstein as well as disgraced Hollywood mogul Harvey Weinstein. Wolff later continued to see Epstein at his office, New York reported in 2007. Wolff told the outlet at the time that he had first met Epstein in the late '90s, recalling how the millionaire was followed around by "three teenage girls" who were "not his daughters." In fact, it appears that Wolff coached Epstein himself when the millionaire first faced charges before his 2005 guilty plea.

"He has never been secretive about the girls," Wolff told New York. "At one point, when his troubles began, he was talking to me and said, 'What can I say, I like young girls.' I said, 'Maybe you should say, 'I like young women.'"

Even after Epstein's 2005 conviction, Wolff continued to try to help Epstein.

"A few years ago the journalist Michael Wolff wrote a profile of him for New York magazine that was meant to 'rehabilitate' Epstein's image and would tell of all the billionaires who still, secretly, hung out with Epstein," The Daily Beast's Vicky Ward reported in 2019. "The piece had 'fact-checking' issues and never ran."