"The Activist" implosion: How a reality show working for greater good became a capitalist nightmare

From making urgent causes compete to its celeb hosts, there was no way the show would air in its original format 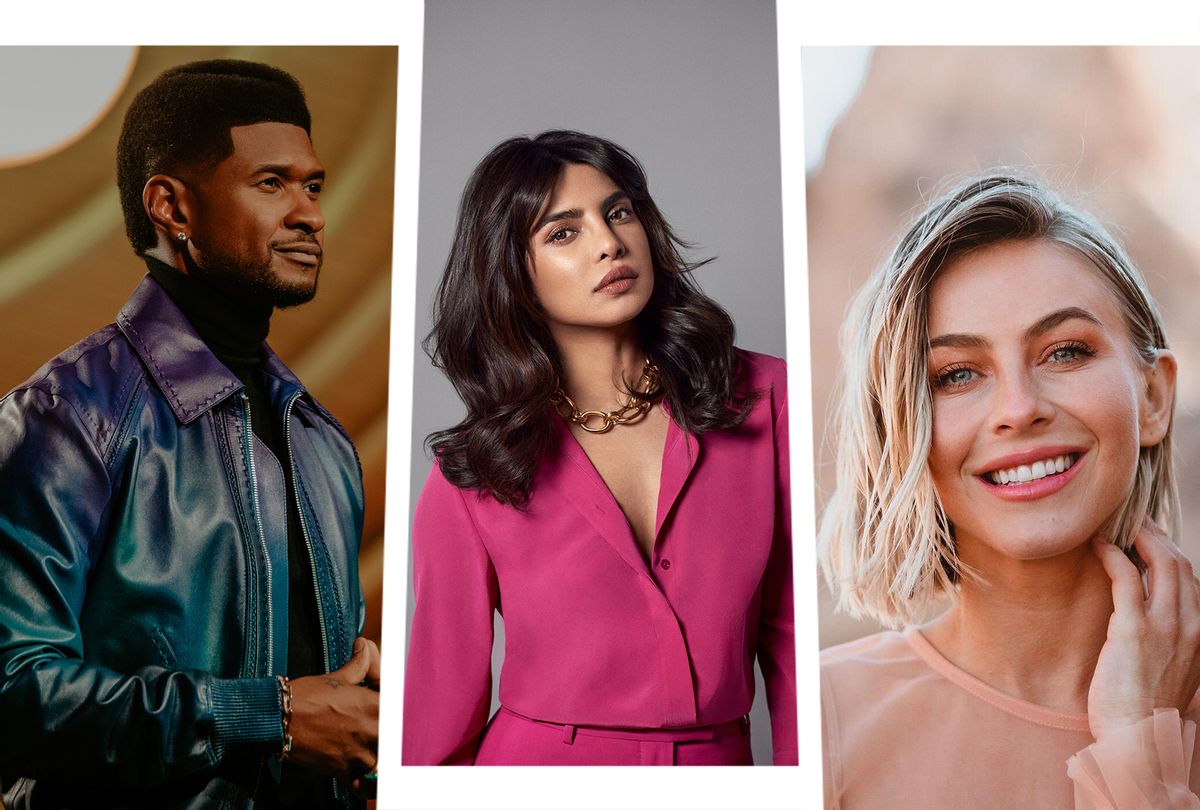 Usher, Priyanka Chopra Jonas and Julianne Hough were named as co-hosts of "The Activist" (Photo illustration by Salon/CBS)
--

Only a week after CBS announced its new reality competition series "The Activist," the network is overhauling it after massive backlash, Variety reported.

In its original incarnation, the show pit six activists against each other for funding – much like a demented version of "Shark Tank." The head-scratching trio of Usher, Priyanka Chopra Jonas and "Dancing With the Stars" alum Julianne Hough were named as the celebrity hosts.

Frankly, the show was doomed from the start. Following an onslaught of criticism directed at the show's tone-deaf premise of making activists and their respective causes compete against each other, Variety reported on Wednesday evening that the competition show will be restructured as a documentary special instead.

How did we get to this point? Salon unpacks the public outcry and the behind-the-scenes drama that led to a show having to rejigger its entire format a month before it premieres.

The origins of "The Activist"

The controversial concept for the series was actually originally announced in May. A press release written up by Deadline includes the details:

The Activist is a competition series that features six inspiring activists teamed with three high-profile public figures working together to bring meaningful change to one of three vitally important world causes: health, education and environment.

Activists go head-to-head in challenges to promote their causes, with their success measured via online engagement, social metrics and hosts' input. The three teams have one ultimate goal: to create impactful movements that amplify their message, drive action, and advance them to the G20 Summit in Rome, Italy. There, they will meet with world leaders in the hope of securing funding and awareness for their causes. The team that receives the largest commitment is celebrated as the overall winner at the finale, which will also feature musical performances by some of the world's most passionate artists.

At the time, no names had been attached to the series, and since many development announcements never see the light of our TV screens, the report received little to no attention.

"I'm pleased to announce the hosts of our new competition-event series 'The Activist,' Priyanka Chopra Jonas, Julianne Hough and Usher," said Sherman. "The series will feature six activists from around the world working to bring meaningful change to one of three urgent universal causes: health, education, and the environment. The activists will compete in missions, media stunts, digital campaigns, and community events, all aimed at garnering the attention of the world's most powerful decision-makers."

The addition of the hosts' names – presumably experts in creating social change – along with a premiere date finally brought the series the spotlight it craved . . . and ultimately regretted.

The backlash: "Our traumas are not games"

The show was immediately slammed on social media, primarily for its truly colossal failure to read the room. Amid a global pandemic, climate catastrophe, economic recession, total dismantling of reproductive rights, and violent racial inequities bleeding into all of these issues, "The Activist" attempted to gamify and commodify interconnected, life-or-death struggles.

In response, more than 70 progressive groups and activists signed an open letter to CBS and Global Citizen critiqueing the premise.

"Pitting activists against one another upholds the 'oppression Olympics' and perpetuates the belief that justice issues must fight over 'breadcrumbs' supplied by those with power, resources and large platforms," the letter states. "Ultimately, this results from the very oppressive systems which we are trying to dismantle. Our lived realities, struggles and traumas are not games, nor competitions for the consumerist gaze."

More people chimed in on Twitter. Posts were alternately angry or brought humor to the commentary by pointing out how the reality competition format – often rife with manufactured tension and ludicrous catchphrases – would be contrasted with the more serious stakes of activism.

The letter to the producers also points out the co-hosts, who will almost certainly be generously compensated for their work on the show, "are in no way equipped to dissect the complexities of 'climate, social and health' issues."

Not only that, but Chopra and Hough have pretty checkered pasts when it comes to social justice, to say the least.

The Daily Beast reported that the show was internally spiraling out of control following widespread criticism. In a Tuesday Instagram post, Hough assured us she was "deeply listening" to the criticisms, whatever that means, and conceded she is "not qualified to act as a judge." Despite this she remains on the show.

That was before critics of "The Activist" resurfaced a photo of Hough dressed for Halloween in blackface as Uzo Aduba's character from "Orange Is the New Black." On Wednesday the "Dancing With the Stars" star was forced to apologize.

"Wearing blackface was a poor choice based on my own white privilege and white body bias that hurt people and is something that I regret doing to this day," Hough said in a lengthy statement in Variety.

Chopra Jonas, former "Quantico" star and Bollywood icon, has been widely criticized for her support for India's nationalist prime minister Narendra Modi, and for appearing to encourage war between India and Pakistan in 2019.

That same year, when an activist confronted her about her previous nationalist statements, She received criticism for her condescending response, telling the audience member, "I hear you, whenever you're done venting. Got it? OK, cool."

Of course, arguably more insulting than the selection of Chopra Jonas and Hough as co-hosts of "The Activist" is the hiring of the celebrity hosts at all, which remains problematic even without the flash and capitalistic flair of a competition element. Their undoubtedly hefty salaries could simply go toward funding support for any of the different contestants' varying causes — and for that matter, so could all of the production costs for the show, as numerous critics have pointed out.

An activist interviewed for the show: "He said I sounded like a robot"

Given the issues with the overall concept and pushing celebrities to the forefront, it should be not surprise that even choosing the activists to feature was a fraught process. According to at least two people who were considered for the show, it appears that the selection process was treated more as an entertainment casting session than a chance to feature important and unsung work.

Clover Hogan, a youth climate activist and founder of Force of Nature, shared a chlling Twitter thread over the weekend about her experience almost being cast on "The Activist." She recounted that the person who interviewed her about her story as an activist insisted that she give "what the producers wanted to see."

"He said I sounded like a robot, talking from a script. He asked me to do it over, this time with more emotion . . . We repeated this several times; until I burst into tears," Hogan wrote.

"I realized that I was totally a character they wanted to manipulate and fit into their own story arc narrative — none of it was about understanding the issues," she told the Daily Beast.

Alicia O'Sullivan, another activist focusing on climate change and youth action, recounted a similar experience that led her to believe the show's creators don't even "really understand" what activism entails.

"I think their concept of activism is if you set up a charity, or if you've set up a huge organization," O'Sullivan told the Daily Beast. "Activism is not just that, it's not just about setting up these huge things." She added, of the show ultimately "ghosting" her, "I dodged a bullet, as far as I'm concerned."

Like O'Sullivan, Hogan was also critical of the show's setup, and the harmful impact it could have on audiences. "I think we have to start a conversation about where action is needed, and why we can't turn activism into some kind of fetishization for people to think that they're engaging in the issues when they're just sitting at home watching this TV show," she told the Daily Beast.

While selecting reality show contestants ultimately comes down to whose personality or story would make for "good television," that aspect of the process should've tipped off producers that the original premise was the wrong fit for the aims of activism.

A mea culpa, but is it enough?

Faced with the avalance of criticism, late Wednesday CBS and its producing partners, nonprofit Global Citizen and Live Nation, finally admitted to their wrongheaded concept and annouced switching to a documentary format. The new version is expected to "focus on the same activists but without the 'challenges' or evaluations" of its previous iteration.

"'The Activist' was designed to show a wide audience the passion, long hours, and ingenuity that activists put into changing the world, hopefully inspiring others to do the same," the producers shared in a statement. "It has become apparent the format of the show as announced distracts from the vital work these incredible activists do in their communities every day. The push for global change is not a competition and requires a global effort."

Unfortunately, problems faced by "The Activist" can't be resolved by merely taking the competition out of the show.

At the center of the original iteration of "The Activist" is the reality that the capitalistic sport of forcing organizers to compete for funding from the exorbitantly wealthy isn't new. Through NGOs, billionaire-founded charities, and the insidious rise of social justice "influencing," activism is already being commodified for wealth and spectacle — "The Activist" simply took this to the next level.

As a documentary, it will have to address these inequities and power dynamics in how activists are often left at the mercy of rich people feeling generous. But color us doubtful; we doubt the new version will do so in a meaningful way.

Furthermore, none of the producing partners have responded to allegations of mistreatment and exploitation from activists who say they were contacted by the show to take part in it. And there's been no word about the continued involvement of the celebrity hosts.

As the creators of "The Activist" now work to adapt and bring forth an entirely new version of the show, it's not yet clear whether the deeply cringe mistakes of their past will be so easily forgiven. At the very least, "The Activist" will most certainly find its place on the television screens of the same crowd who shared black squares on Instagram to protest police violence last summer, and called that enough activism for the day.

But actual activists, and most consumers with basic critical thinking abilities, will likely be skeptical of "The Activist" — until given actual reason to trust it.