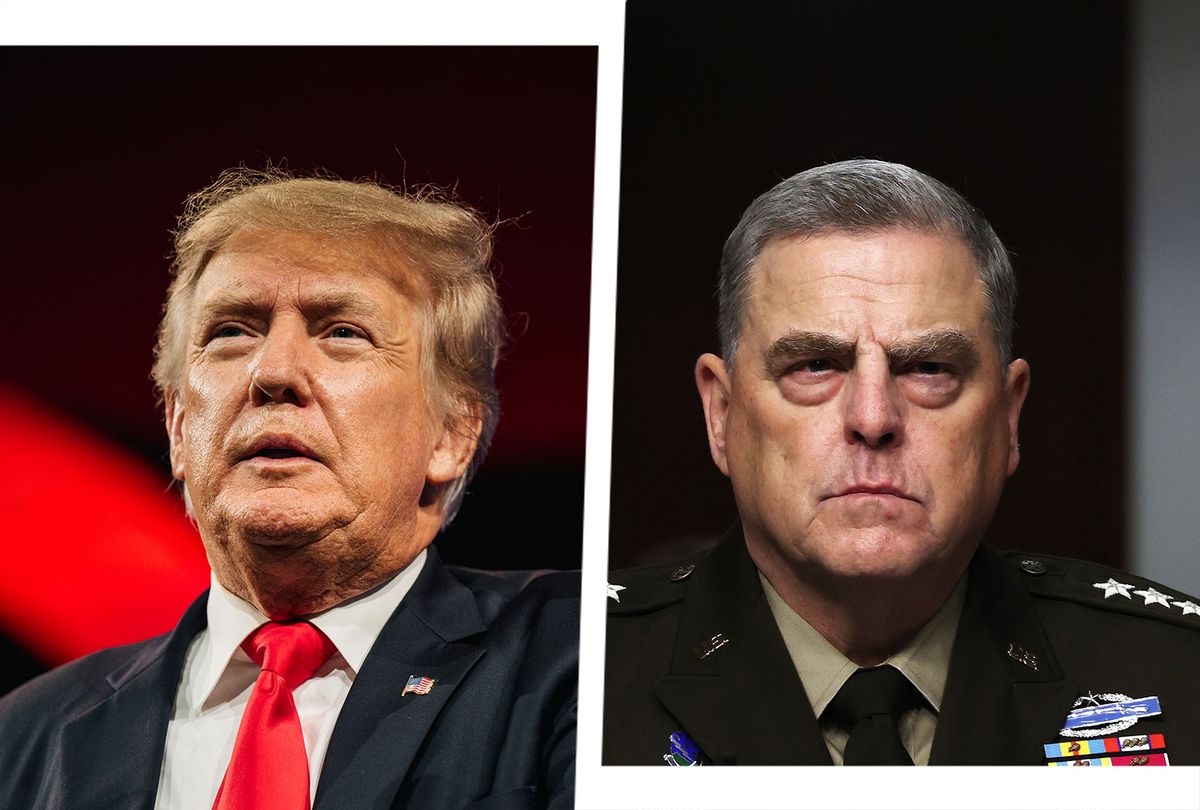 Is it life imitating art imitating life, or something even more complicated than that? At this point in America's state of malignant normality and unreality I am no longer sure. America in the Age of Trump lost the plot some time ago.

Consider this narrative: A crazed and out of control president, viewed by political rivals and military leaders as so unstable he might start a war — even a nuclear conflict — to gratify his ego and hold onto political power. He has launched a coup attempt, which remains unresolved. But a few brave and patriotic souls are willing to stop this president in order to save the country and the world from catastrophe and potential annihilation.

That comes rather too close to the plot of the 1965 thriller novel "Night of Camp David." Unfortunately, these events are not fictional. Gen. Mark Milley, chairman of the Joint Chiefs of Staff, and other senior military and civilian leaders felt it necessary to prevent Donald Trump from acting out his most destructive impulses after losing the 2020 election, fearing the risks of a new world war.

These details come from CNN's report on "Peril," the new book on the presidential transition period by Bob Woodward and Robert Costa of the Washington Post:

Woodward and Costa write that Milley, deeply shaken by the assault, "was certain that Trump had gone into a serious mental decline in the aftermath of the election, with Trump now all but manic, screaming at officials and constructing his own alternate reality about endless election conspiracies."

Milley worried that Trump could "go rogue," the authors write.

"You never know what a president's trigger point is," Milley told his senior staff, according to the book.

In response, Milley took extraordinary action, and called a secret meeting in his Pentagon office on January 8 to review the process for military action, including launching nuclear weapons. Speaking to senior military officials in charge of the National Military Command Center, the Pentagon's war room, Milley instructed them not to take orders from anyone unless he was involved.

"No matter what you are told, you do the procedure. You do the process. And I'm part of that procedure," Milley told the officers, according to the book. He then went around the room, looked each officer in the eye, and asked them to verbally confirm they understood.

In a conversation with House Speaker Nancy Pelosi, Woodward and Costa report, Milley agreed with her characterization that Trump was "crazy" and had been so "for a long time." The authors write that after the Jan. 6 Capitol attack, Milley "felt no absolute certainty that the military could control or trust Trump and believed it was his job as the senior military officer to think the unthinkable and take any and all necessary precautions," calling it the "absolute darkest moment of theoretical possibility."

According to Woodward and Costa, national security officials appointed by Trump agreed. Then-CIA director Gina Haspel told Milley, "We are on the way to a right-wing coup. The whole thing is insanity. He is acting out like a six-year-old with a tantrum." Even Secretary of State Mike Pompeo, who had refused to acknowledge in public that Biden had won the election, told Milley that Trump was "in a very dark place right now."

Trump's supporters in the Republican Party are predictably focused on a single detail: CNN's report that Milley had "two back-channel phone calls with China's top general, who was on high alert over the chaos in the U.S.," in an effort to prevent a military incident between the two nuclear-armed nations. The right-wing disinformation machine is not interested in any form of accountability for Donald Trump, of course. Instead, leading Republicans and conservative pundits are demanding that Milley resign and be punished for alleged "treason." Trump himself has publicly declared Milley to be a traitor.

That response offers more evidence — if any was needed — of how today's Republican Party has become a fascist cult and a political crime syndicate, where loyalty to the leader matters more than anything else, including the survival of the nation or the entire world. Public opinion polls indicate that Republican voters largely feel the same way.

This is part of a larger right-wing impulse towards death and destruction, as seen with Republicans' collective response to the pandemic, the global climate crisis, mass shootings, police violence, economic inequality and other forms of injustice, and societal harm and human suffering more generally. In total, the "revelations" in Woodward and Costa's book are further proof that today's Republican Party is a massive danger to the world.

What happened? In 2015, the Republican Party made a devil's bargain with Donald Trump. He would provide the destructive energy and cult of personality that would give Republicans and the white right an opportunity to undermine, if not destroy, the country's democratic norms and institution. The proximate political goal was clear: Find a way to keep the Republican Party in power indefinitely, even in the face of demographic changes that threaten to render it obsolete.

As seen in Texas and many other states, the Republican Party's new campaign against democracy is scoring important victories and gaining momentum. Whether Trump himself believes in the cause is irrelevant: He is an instinctive fascist and demagogue, with no discernible ideology. For him, the presidency was a means to an end, an unlimited source of narcissistic fuel and a way to enrich himself (and his inner circle) and accumulate more power and attention.

As he revealed on numerous occasions, Trump's impulse was to seek out ways he could remain president into the indefinite future.

Per the account in "Peril", Vice President Mike Pence told Trump he had no power to reverse the results of the presidential election. Trump then asked him, "But wouldn't it be almost cool to have that power?"

Ultimately, Trump understood the Republican Party's voters and their darkest and most malevolent desires better than did nearly all Republican pollsters, pundits, opinion leaders and political strategists.

Donald Trump instinctively understood that his followers — the "deplorables" that Hillary Clinton warned the American people about — did not care about being "respected." They wanted permission to unleash their worst fantasies and desires, unrestrained by "political correctness" and other societal expectations that they respect the humanity of other people. Such a concept of "freedom" is central to Trumpism and other forms of fascism. Trump's followers see in him a projection of their ideal selves. This is why they are willing to kill and die for him and the movement.

In response to these new "revelations" about the latter days of the Trump regime, the mainstream news media is back on its hamster wheel of shock and surprise and outrage. This is largely political theater, not the kind of rigorous pro-democracy journalism that America's battle against neofascism demands. In a few days, the hope peddlers and professional "smart people" will move on to the next controversy.

To protest that the Republican Party is hypocritical or lacks principles, as some commentators invariably do, is a pitiful example of missing the point.

Peter Wehner expounds on this in a recent essay for the Atlantic, observing that the "MAGA brain" has been "rewired":

Republicans who assumed that the party would return to sanity after Trump left office never understood how deforming the effects of his presidency would be. For many, Trump's behaviors were initially a bug; eventually, they became a feature. Republicans ignored his corruptions and reveled in his cruelty. They entered Trump's hall of mirrors, and they rather enjoyed it.

To better understand what's happening in the GOP, think of a person with addiction who over time develops a tolerance; as a result, they need more potent and more frequent doses of the drug to get their desired high. And sometimes even that isn't enough. They might turn to a more potent drug, which offers a more intense experience and a longer-lasting high, but at the price of considerably more danger.

In the final analysis, today's Republican Party and the right-wing neofascist movement have no principles beyond winning at all costs. To deny that fact is to deny reality. Unfortunately, too many Americans, including everyday people as well as members of the political class, have convinced themselves that the Age of Trump and beyond is like a Hollywood movie, sure to arrive at a requisite happy ending in which good triumphs over evil. As most Black and brown Americans already know, such an outcome is not guaranteed in the real world. Such fantasies are not exclusive to white people, but they are definitely an artifact of white privilege.