The U.S.'s disjointed COVID-19 response may be due to our hyper-individualistic culture 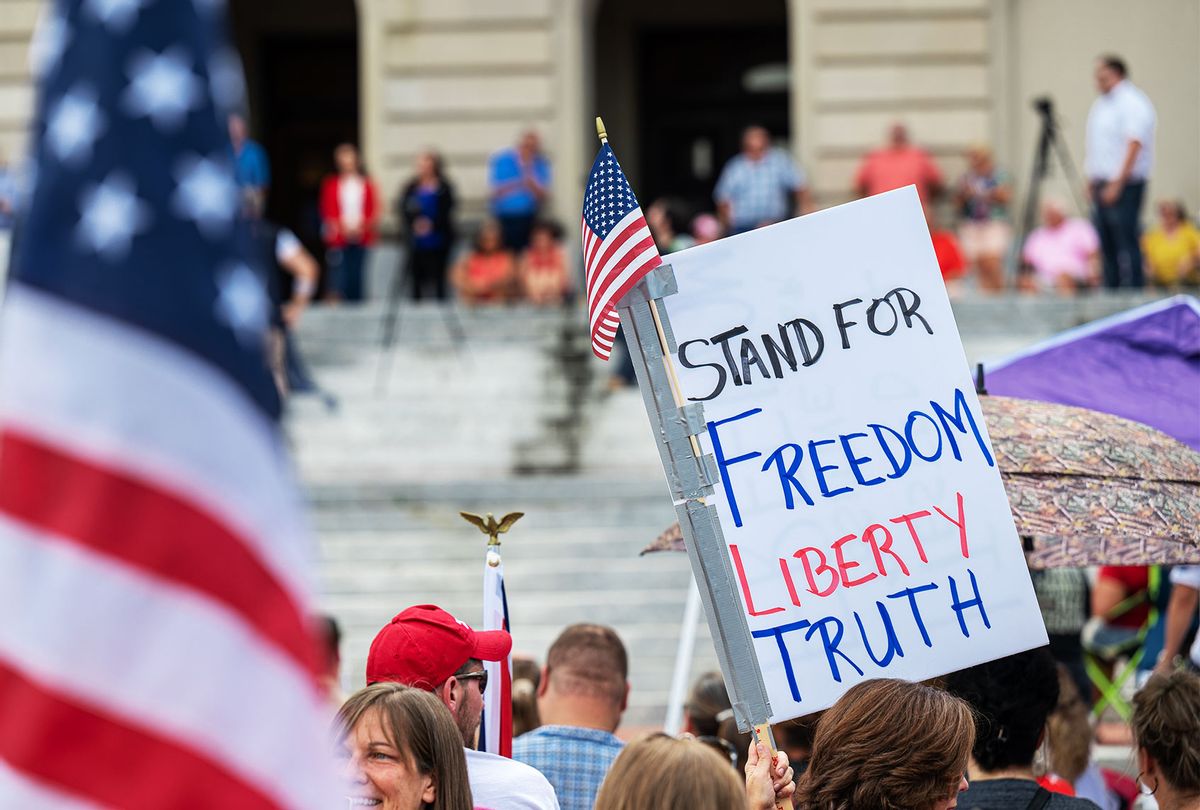 People display signs during the Kentucky Freedom Rally at the capitol building on August 28, 2021 in Frankfort, Kentucky. (Jon Cherry/Getty Images)
--

The existence of millions of American reactionaries, who despise public health measures that save lives like their own, seems to attest to our nation's storied obsession with individualism. As a culture, the United States is defined by its focus on the individual and individual rights, something that has, more or less, been intrinsic to national culture since America's founding.

Anecdotally, other countries with seemingly less hyper-individualistic cultures have done far better managing the pandemic, at least in terms of controlling the virus. Recently, researchers from the United States (a notoriously individualistic society) and China (a notably communal society) studied whether one could answer this question quantitatively. Specifically: are citizens of collectivistic cultures more likely to wear masks than those from individualistic cultures? Or are facemask scofflaws evenly distributed throughout humanity?

In probing this, researchers looked at data from all of America's 3,141 counties, as well as data from dozens of countries. Publishing their findings in June in the scientific journal Proceedings of the National Academy of Sciences, they stated definitively that "collectivism positively predicts mask usage during the COVID-19 pandemic—both within the United States and across the world." These findings could have major implications for our understanding of how to handle both this pandemic and future crises — assuming, of course, that we accept the existing academic framework regarding "collectivism" and "individualism" at face value.

It is important to understand exactly what "collectivism" and "individualism" mean in these contexts. When social psychologists use those terms to describe cultures, they are usually referencing the ideas of Dutch scholar Geert Hofstede. Hofstede's cultural dimensions theory attempts to measure culture and how individual behaviors in a society are affected by culture. The theory has its critics — some feel his ideas are methodologically flawed, simplistic or reinforce cultural uniformity — and over the years it has evolved.

When it comes to COVID-19, however, the relevance of Hofstede's concepts is pretty straightforward. As Hofstede himself explained last year when describing COVID-19 and culture, "in an individualistic society, such as Anglo countries or the Netherlands, people behave like atoms in a gas. They can freely choose whether to group or to separate." By contrast people in collectivist societies "are more like atoms in a crystal. What they do, reflects their role in society. Whatever the external circumstances, they organize themselves in groups that tend to stick together for life. Getting out of role can be severely shamed or even punished."

Other studies have applied Hofstede's ideas to understanding public responses to COVID-19. A February paper by American, Israeli and Swiss researchers also found that individuality in cultures negatively corresponded to their overall willingness to abide by public health measures. Defining culture as "the collective programming of the mind which distinguishes the members of one category of people from another," they cite a 1968 academic article which predicted that people in more individualistic cultures would likely be more severely impacted by a pandemic because members are trained to care less about the common good. After finding that people in more collectivistic societies responded in a healthier way to the pandemic, they concluded that "leaders should try to foster a more collectivistic mindset among their constituents regarding promoting safe conduct during the current pandemic or future ones." They added that in cultures where the individualism is deeply rooted, they should try to get people to protect the common good by trying to "stress the individual benefits of safe conduct and vaccination instead of making the case of collectivistic social responsibility."

These studies collectively explain much of the anti-mask and anti-vaccine sentiment in the United States.

"Compared to countries like India and China, the USA is very high on individualism, implying that people are expected to only look after themselves and their immediate family and not be very concerned with societal welfare at large," Dr. Hansika Kapoor, who works at the Department of Psychology in Monk Prayogshala, told Salon by email. "This would also impact vaccine uptake rates wherein COVID-19 may not be seen as a cooperation/coordination problem but rather as something to be dealt with at the individual level without appreciating larger consequences."

Anirudh Tagat, who works at the Department of Economics at Monk Prayogshala, said that a couple of things about America stand out when studying COVID-19 and vaccination rates.

"For one, there is no precedent in terms of data to understand adult vaccination rates — routinely, vaccinations are something we only look at as something that children should get," Tagat wrote to Salon. "Therefore, there's also not that much data on adult vaccination rates. Just using the currently available COVID-19 data, there's no clear indication that vaccination is different in culturally dissimilar countries — but this might be mainly because what we're looking at is vaccination rates (which is not just down to who takes the vaccine, but also to that country's ability to deliver a vaccine), rather than things like vaccine hesitancy (which are harder to measure)."

Both scholars also warned against reducing too much to cultural dimensions theory.

"Considering that each nation is uniquely diverse within itself, cultural dimensions at the national level should be interpreted with caution," Kapoor explained. She noted that someone living in a large city like Mumbai or New York City may have very similar outlooks because of education, social standing and other sociodemographic factors, regardless of the fact that they live on opposite sides of the planet.

"It may be necessary to supplement national level metrics of cultural dimensions with individual-level ones (to identify the diversity within one's sample and the extent to which that maps onto the nation's dimensions)," Kapoor argued. Tagat had a similar point.

"I think it's difficult to boil a thing down like culture to a single measure or metric, or even several ones as cultural dimensions theory attempts to do," Tagat argued. "There's merit in it for sure, but I think we still have a long way to go in terms of figuring out how to incorporate culture into our understanding of human behaviour because it involves many disciplines (psychologists, evolutionary biologists, behavioural scientists, anthropologists, sociologists, economists) speaking to each other (something we're neither trained to do nor eager to do)."