Will the mainstream media ever face its failure to tell the truth about Jan. 6?

Media voices proclaimed that Trump was a buffoon who could never stage a coup. Now they just want us to forget 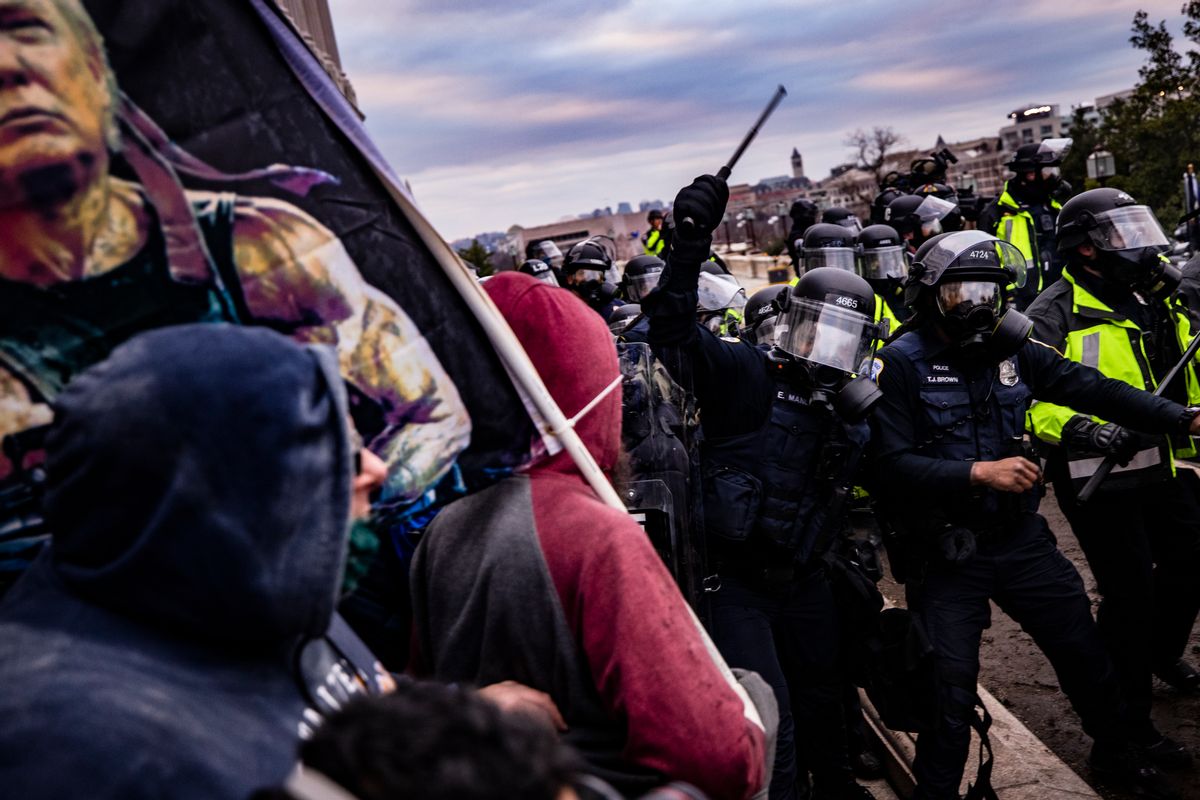 Police officers attempt to push back a pro-Trump mob trying to storm the U.S. Capitol on Jan. 6, 2021. (Samuel Corum/Getty Images)
--

A year or so ago, many or most of the professional smart people in the mainstream news media felt certain that Donald Trump and his allies would not attempt a coup. Those of us who warned that Trump would do anything to stay in power were described as hysterical or alarmist, and suffering from "Trump derangement syndrome."

We were told that Republicans, for all their bad behavior, were patriots who loved America, and that Trump himself was too ignorant, too disorganized and too incompetent to succeed in overturning an election.

After Jan. 6, those who denied that such a thing was imaginable were made to look like adults who believe in Santa Claus. More important, Trump's coup was not defeated. Its ringleaders and organizers are not in jail, but are walking free and overtly planning for a more successful attempt next time.

Donald Trump and the other ringleaders and organizers are still not in prison. They are walking free and have not been punished.

Trump and his fascist movement are continuing their nationwide effort to undermine multiracial democracy through spreading the Big Lie and using lawsuits, legislation, and other means — including threats of terrorism and political violence — to restrict the right to vote, particularly for Black and brown people and other key members of the Democratic base.

How have many of the gatekeepers of approved public discourse in America responded to the events of Jan. 6 and the continuing attacks on American democracy? For the most part, by throwing their huge mistake down the memory hole. The boldest among them now present themselves as full-throated defenders of American democracy, claiming that they actually warned the country and the world about Trump's imminent coup attempt.

They simply hope that the public is not paying attention. To watch this public rewrite of American history in real time is something like seeing a TV series recast a prominent character with a new actor in the middle of a season, while pretending that nothing has changed. Given the limited attention span of the American people at large, this ploy may work.

But the constant torrent of "revelations" about the Trump cabal's coup attempt has made it increasingly difficult for the media and political classes to maintain the charade. Last week we learned about right-wing legal scholar John Eastman, who created a how-to guide designed to encourage Vice President Mike Pence to overturn the Electoral College votes in Congress and award Trump a bogus victory.

Eastman's argument at least broadly tracks the plan embraced by Trump and the mob of right-wing supporters who stormed the Capitol on January 6. It posits that the Electoral Count Act grants the vice-president discretion over which electoral ballots to accept as part of the official count.

The legal merits of the argument don't matter very much — Eastman's interpretation is widely derided as crazy, but the key point is that even if he's right, he would have identified a wormhole in the Constitution permitting the vice-president to override the election results. Since the vice-president's interests are typically aligned with the president's, this power would allow the president's party to stay in office through an indefinite series of elections.

The last few weeks have seen other damning "revelations" about Trump and his regime's coup plot. As reported in Bob Woodward and Robert Costa's new book "Peril," Trump appeared so unhinged after the November election that Gen. Mark Milley, chairman of the Joint Chiefs, and other senior national security leaders were worried that he might start a war with China or Iran.

As I wrote in an earlier essay for Salon, these "revelations" should not be surprising: "In so many ways, these "revelations" about Trump and his regime's misdeeds are like the picture on the front of a jigsaw puzzle box. We know what the final image will look like, but still need to put together the pieces. So the end result is something of an anticlimax."

Last week, the House select committee on the Jan. 6 uprising issued its first subpoenas to members of the Trump regime  and other apparent participants, including former White House staffers and Trump lackeys such as Steve Bannon, Mark Meadows, Kash Patel and Dan Scavino.

It's possible we will learn more about the events of Jan. 6 if those people are compelled to testify. But honestly, that is not likely. Those people are deeply loyal to Trump and have already demonstrated their contempt for American democracy and the rule of law.

Now...and this is the tricky part, but do try to pay attention. Fuck. These. Guys. Don't let them or their lawyers wedge you into the phony courtesies and hollow formalities of the Old Washington. These are people who would have gladly burned down our nation.

1/6 for them wasn't a failed coup. It was training exercise.

In hindsight, Donald Trump's repeated threats that he would not respect the outcome of an election if he lost were clear statements of intent. Some of the efforts to deny or otherwise minimize Donald Trump and his cabal's imminent coup attempt are stunning in their level of failure and denial.

In an essay for CNN, Stephen Collinson attempts to navigate the morass of wrongness and self-delusion in the mainstream media, beginning with the observation that a "growing paper trail ... appears to prove Trump's intent to stay in power illegally":

The record is beginning to add up to an extraordinary indictment of the ex-President's abuses of power and one of the darkest moments in US history.

In the fraught days after the election last year and after the Capitol insurrection, many observers were unwilling initially to use the word coup — aware of the explosive nature of such language. The surreal experience of watching an assault on constitutional guardrails once thought inviolate also was, at times, hard to process. And skeptics of the coup terminology also suggested that Trump's efforts were little more than madcap and incompetent political theater.

Yet the conspiratorial and at times clownish attempts to overturn the election — especially by Trump's legal team — don't make an unprecedented effort to destroy America's democratic traditions any less mendacious.

In this era of grave and imminent danger, the mainstream media remains beholden to an old order that is now obsolete, one in which Democrats and Republicans behaved in accordance with a shared belief in democracy and other foundational rules about the respect for institutions, the Constitution and the rule of law, among other political norms.

This commitment to an obsolescent political order, with its conventions of horserace journalism, both-sides-ism and other false equivalencies have only served to normalize and empower a criminal, destructive, racist and deeply sociopathic  political movement.

No one can possibly argue that modern political journalism has fulfilled its essential mission of creating an informed electorate.

So it's long past time for a reset.

Let's start with the overarching problem: Misinformation, disinformation and gaslighting have become rampant in our political discourse, turning citizens against each other, choking the legislative process, eroding confidence in elections, and, in the age of Covid, literally getting people killed. A striking number of voters are laboring under a series of delusions that make them incapable of rational decision-making. The country is still reeling from a violent attempted coup in the name of a Big Lie — a lie that has essentially become doctrine for one of our two major political parties.

Despite all this, our elite political media recognizes no need for a course change.

If the mainstream news media is to redeem itself and take up the mission of serving the public interest during this democracy crisis, there must be a public reckoning with its failures. One possible beginning might include public letters and other statements from the editors and producers of major media institutions in which they explain their coverage of Trump's coup attempt and his regime more generally. Those who minimized, rejected or mocked the imminent possibility of a coup should also be invited to explain their reasoning.

Nationwide panel discussions or public forums on how and why the media performed so poorly should also be contemplated. Civil society organizations could play a critical role in creating and enabling this necessary moment of national reckoning.

Will any of that happen? Quite likely not — but if the media is unwilling to engage in critical self-reflection about its failures in the Age of Trump, we can almost guarantee that the next coup attempt will be better organized and more effective. Where will press freedom and the First Amendment be after that?