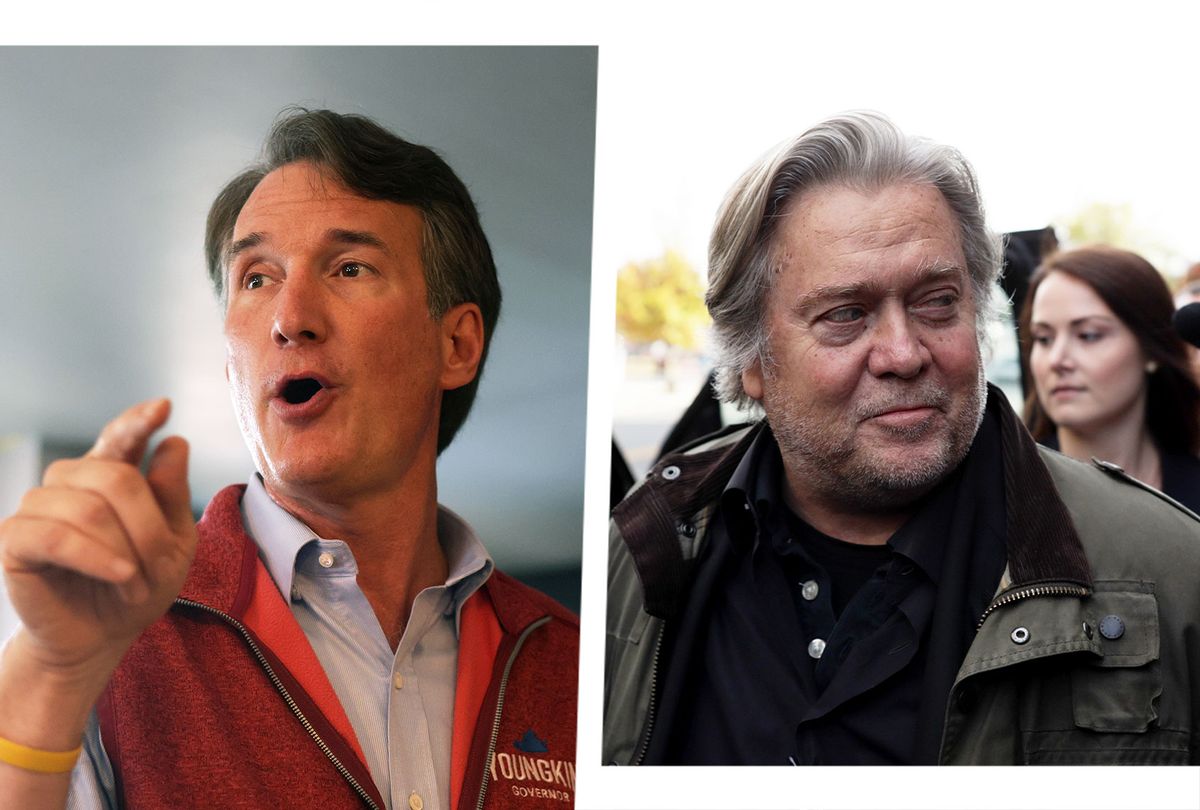 RICHMOND, Virginia —  Former President Donald Trump called into the "Take Back Virginia" rally here on Wednesday night headlined by Steve Bannon, the onetime White House strategist turned right-wing radio host and podcaster. But the twice-impeached ex-president wasn't even the headline: That came when assembled MAGA faithful from across the Old Dominion recited the Pledge of Allegiance before a U.S. flag that emcee Martha Boneta said had been flown "at the peaceful rally with Donald J. Trump on Jan. 6."

This event, organized by fellow radio host John Fredericks, served as a not-quite-official campaign rally on behalf of Republican gubernatorial candidate Glenn Youngkin, who has been repeatedly endorsed by Trump. But Youngkin wasn't present, and after the flag episode began to trend heavily on Thursday was forced to disavow the entire spectacle. "I wasn't involved and so I don't know" whether people saluted a Jan. 6 flag, Youngkin told The Hill. "But if that is the case, then we shouldn't pledge allegiance to that flag."

Still, the point of this gathering of around 250 hardcore Trump supporters was obviously to focus on the hotly contested Virginia gubernatorial race between Youngkin and former governor Terry McAuliffe, a veteran Democratic operative and close ally of Bill and Hillary Clinton.

Youngkin has attempted a complicated two-step, maintaining some distance from the MAGAverse to appear "moderate" in a purple state that has trended toward Democrats, but without losing support from Trump loyalists. It may be working, in that the race with McAuliffe appears neck-and-neck and Trump called in personally on Wednesday night to offer Youngkin his full-throated endorsement. Yet again.

"Glenn Youngkin is a great gentleman," Trump told the energetic crowd via speakerphone. "We won in 2016. We won in 2020. The most corrupt election in the history of our country, probably one of the most corrupt anywhere. But we're gonna win it again."

"I believe that Virginia is very, very winnable, but we have to get everyone to get out and vote," Trump added.

Wrinkled sheets of a petition calling for a "full forensic audit" of Virginia's 2020 results were circulated throughout the event, under the direction of a woman who did not identify herself when asked by Salon. She said she had gathered a "great" number of signatures and expressed hope that the 2020 election in Virginia would be overturned.

"Please take further notice that when government is functioning in a way that goes against the People's will and authority, the People are to correct their behavior and lead them in ways consistent with the constitution and that redress grievances," the single-paged petition read, which is set to be delivered to current Virginia Gov. Ralph Northam, a Democrat.

Casey Flores, president of the Log Cabin Republicans (an LGBTQ conservative group), told Salon that he listens to "War Room," Bannon's podcast, every day. "I wanted to come out to see Steve Bannon," he said, adding that many of the attendees weren't so much Republicans as hardcore Bannon fans and "people who lost their jobs to globalism ... the forgotten American people."

Tom Oakes, another attendee who traveled an hour to attend the gathering, told Salon that he came out to support Bannon and "to learn how to be more activist in politics." Business owner Roy Bordner said he came to the event out of concern that "people are afraid to speak out because of wokeness," although he wasn't pleased that the free Trump hats being given out had been made in China.

Bannon repeatedly assured people over the course of the event that you "don't have to be a donor" to participate in his movement, but most of the 250 or so people there (the organizers claimed it was 450) were charged about $45 per ticket. At that price, Bannon and company collected between $11,000 and $20,000 for the night.

In recent weeks, Bannon has spoken frequently on his daily podcast about the need for as many as 20,000 "shock troops" to stand ready to serve a second Trump administration, presumably after the 2024 election, although he sometimes hints it might happen sooner than that.

​​"Shock troops? What?" one diehard MAGA attendee told Salon, unsure what the term meant. Three other individuals who would not give their full names also did not understand the reference, and said they did not identify as "shock troops." Very few of the attendees present fit the vigorous and youthful "shock troop" template Bannon and his guests have characterized on his program, prepared to leave their previous lives behind and step into key roles in a future Trump administration.

"I love Mike Lindell," Katty, a fervent Bannon supporter, told Salon, when asked what she likes most about Bannon's daily program. She went in to explain the hottest deals offered by Lindell's MyPillow company. A resident of rural Prince George's County east of Richmond, Katty also said she supported the petition for a full forensic audit in the state.

As the night came to a close, Virginia state Sen. Amanda Chase, a former Youngkin opponent famous for describing herself as "Trump in heels," said that in an effort to crack down on "voter fraud," Republicans are "watching the clouds, because we know that cyberattacks are going on."

"The Youngkin campaign knows what's going on," she assured her audience. "We are watching like we've never watched before."