Even if carbon emissions are curbed today, hundreds of millions will be displaced as vulnerable cities see flooding 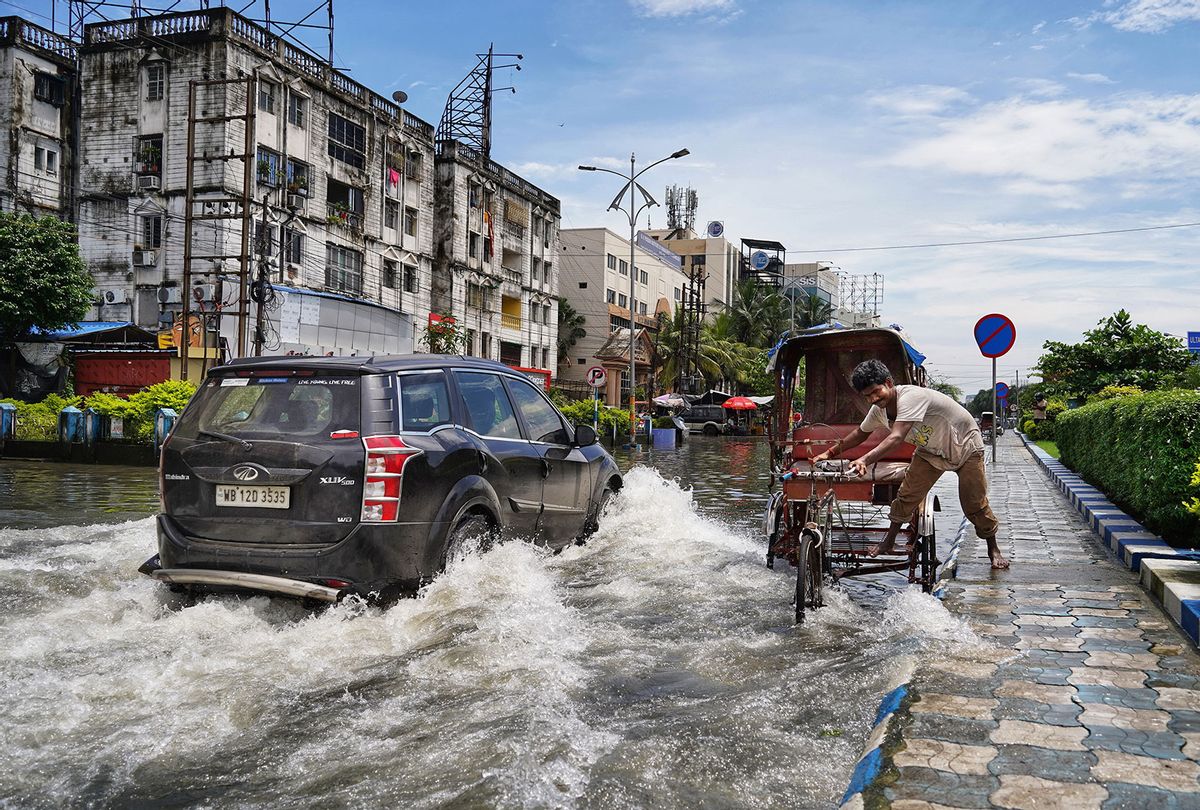 A vehicle passes through a flooded street. All the major roads are flooded after the heavy rain during monsoon at Kolkata, West Bengal, India (Dibakar Roy/Pacific Press/LightRocket via Getty Images)
--

When it comes to climate change, the point of no return has already passed.

That is the message of a new report published in the esteemed scientific journal Environmental Research Letters. It paints a picture of a future Earth in which, regardless of actions taken today, hundreds of millions of people will be displaced from their homes by rising sea levels. The carbon dioxide emissions already released into our atmosphere will linger for hundreds of years, warming the oceans and thus causing sea levels to rise. The only question now is whether the damage can be limited.

The answer, according to the report, is yes — but humans will need to take specific, drastic actions as soon as possible.

"Meeting the most ambitious goals of the Paris Climate Agreement will likely reduce exposure by roughly half and may avoid globally unprecedented defense requirements for any coastal megacity exceeding a contemporary population of 10 million," the authors write. (The report was co-written by Benjamin H. Strauss and Scott A. Kulp of Climate Central, DJ Rasmussen of Princeton University and German scientist Ander Levermann.) The long-term goal of the Paris Agreement is to limit the mean increase in global temperatures to no more than 1.5°C above pre-industrial levels. Even if that happens, however, oceans will continue to swell, meaning there will be millions upon millions of drenched city dwellers.

"Roughly 5 percent of the world's population today live on land below where the high tide level is expected to rise based on carbon dioxide that human activity has already added to the atmosphere," Strauss told AFP. With roughly 7.8 billion human beings alive today, this means approximately 390 million currently live on land that will be under the high tide level as a result of climate change.

That said, reducing the temperature rise is crucial, experts say. If Earth's average temperature increases by even half a degree Celsius, an extra 200 million people will be vulnerable to the effects of sea level rise and increased storm surges. Each successive degree only increases the damage, as sea levels progressively rise and thereby displace more people.

In the report, the scientists offer detailed projections for the 20 most-affected large countries (those with at least 25 million people) in terms of the percentages of their populations that currently occupy land below high tide lines based on different warming scenarios. If the planet merely warms by 1.5°C, 2.8 percent of the population of the United States could be directly impacted. Increase that by half a degree, and suddenly 5.9 percent of Americans could deal with rising sea levels. If it goes up by 3°C or 4°C, 7.9 percent or 9.9 percent of the American population could see rising sea levels where they live.

Things will be particularly bad in New York City, where officials are already considering sea walls and other measures to fortify its population against rising sea levels. Even under the most ambitious Paris Agreement target, land will fall under the high tide line that is currently home to 6.7 percent of the population. At 2°C, that rises to 13 percent; at 3°C, it reaches 19 percent; and at 4°C, it hits 28 percent.

The most vulnerable region, however, is Asia. Nine of the ten megacities at the highest risk are on that continent, and many of the countries with the starkest projections are also located there. The jump from 1.5°C to 2°C makes the difference, in Vietnam and Bangladesh, between more or less than half of their total populations living below the high tide line. If the planet's temperature rises to 4°C above pre-industrial levels, more than 60 percent of those nations' populations could fall below the high tide line. More than 30 percent of the populations of Egypt, Thailand, Malaysia, the Philippines, Japan and Myanmar would also suffer that fate in a scenario where the temperature rises by more than 4°C.

Climate Central has also released visual illustrations of how prominent American landmarks will look after sea level rises. Almost all of the land around the Statue of Liberty National Monument will be submerged, as will the area surrounding Space Center Houston. Yet these and other major landmarks would almost certainly have to be abandoned long before sea levels rose that high, as there will be an increase in heavy rainfalls and storm surges.