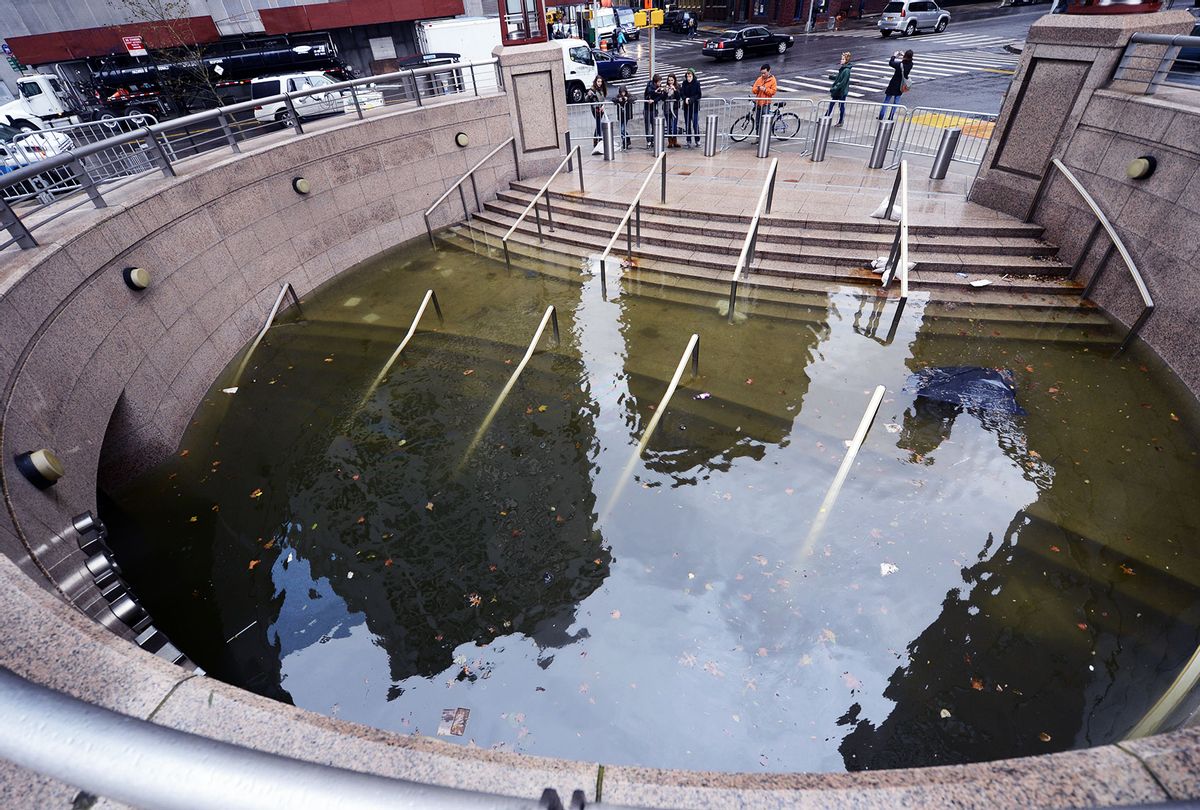 People take photos of water filling the entrance of The Plaza Shops in Battery Park in New York on October 30, 2012 as New Yorkers cope with the aftermath of Hurricane Sandy. The storm left large parts of New York City without power and transportation. (TIMOTHY A. CLARY/AFP via Getty Images)
--

The video is surreal. New Yorkers huddle at the 157th Street subway station in Washington Heights, Manhattan, staring down into the depths of the subway. But the underground facility is flooded, the water waist-deep. Those brave enough to wade inside find that the water comes up to their knees, or even higher. Someone passes around trash bags to serve as makeshift tarps as hapless New Yorkers clumsily hop around to minimize the discomfort of wading through the frigid murky depths.

If climate change goes unchecked, that haunting visual will prove to have been a glimpse into the future of New York City.

"In a worst case scenario, much of Manhattan would be submerged by 2300" if current greenhouse gas emission rates are not curbed, Penn State University climate scientist Dr. Michael E. Mann told Salon. "That future isn't all that far off if we don't get our act together," Mann added.

New York City is often thought of as the capital of the world, and for good reason. The city itself is home to more than 8.3 million souls, far greater than any other American city, and the metropolitan area has more than 19 million inhabitants. The so-called Big Apple is one of the leading financial, cultural, scientific and political centers in the world. Wall Street, the United Nations, Broadway and numerous institutions of higher education are all there. If New York City were to vanish, it would be more than a tragedy. Its sudden loss would profoundly alter the fabric of not just America, but the entire world.

Climate change could make that happen.

Dr. Andra Garner, an environmental scientist at Rowan University whose expertise is in climate change, studied New York City's future in her Ph.D. work. Garner and her colleagues created scientific models that incorporated what we know about rising sea levels and possible changes in future hurricane paths. They found that, although New York City used to only have flooding of 7.4 feet or more every 25 years, that could start happening every five years as early as 2030. It also predicted a 5-to-11 inch sea level rise in New York City between 2000 and 2030. If that happens, you can expect far more occasions of subway flooding. Many other roads and buildings will also get flooded, particularly those along the coast. Imagine historic sites ruined by water damage and large sections of the city suddenly becoming uninhabitable, and you get the idea. (And that doesn't even take into account how heat waves and increased precipitation will change New Yorkers' lives.)

One way that New York City is trying to prepare for this is by building the Rockaways–Atlantic Shorefront project, envisioned as a six-mile-long armored dune with stone groins perpendicular to the shoreline that would protect New Yorkers from storm surges, trap sand and reduce beach erosion. That project alone will cost $336 million, but the U.S. Army Corps of Engineers is going even farther, pushing for a sea wall that would cost $119 billion and may still be too low for rising sea levels. Still, the city cannot afford to dismiss costly proposals, for the simple reason that geography makes it extremely vulnerable. Thirty-seven percent of lower Manhattan will be vulnerable to storm surges, which reflects the global reality: Forty percent of the human beings alive today live in a coastal area.

"The future is still very uncertain for a number of reasons, but assuming we were really to not do much at all to try to mitigate climate change or adapt to a changing climate, I think certainly by the middle of the century we'll be seeing things like sunny day flooding happening lot more often," Garner told Salon. She noted that this has already started to become a problem in coastal communities along the eastern seaboard.

"We'll see flooding happening just more and more frequently, which of course becomes a major hassle to people in any community, but certainly in a densely populated area like New York City," Garner explained. "Those floods, whether it's just from a high tide or whether it's from a storm, I think would be very detrimental to the region."

There are four factors from climate change that could potentially impact the physical life of New York City, according to Mann. If the ocean's so-called "conveyor belt" slows down, as some scientists fear is already starting to happen, that on its own could cause as much as a foot of sea level rise along parts of the Atlantic coast. There could also be multiple feet of sea level rise if the major ice sheets in the western Antarctic and Greenland collapse, something that (again) scientists are already observing starting to happen.

"The uncertainty is associated with what amount of warming triggers these threshold-like responses," Mann told Salon. "The science has increasingly moved toward us being closer to that threshold than we believe a decade or two ago."

In addition to melting ice sheets and slowing ocean currents, Atlantic coast sea levels may also rise by fractions of a foot due to factors like thermal expansion of the ocean with warming and melting glaciers that aren't ice sheets.

Dr. Gernot Wagner, a climate economist at New York University and New York City Panel on Climate Change, spoke with Salon about another major climate change concern facing America's largest metropolis — rising temperatures. As greenhouse gasses continue to trap heat in our atmosphere, we can expect the planet to gradually warm up. That means that, depending on where you live, the infrastructure around you could actually make your experience worse than might otherwise be the case. Imagine a slug spending its summer in a meadow, and then that same slug spending a summer stuck on a sidewalk, and you'll get the picture.

This is because of a phenomenon known as the Heat Island Effect, wherein the densely-populated parts of a city that are covered in asphalt and concrete become much hotter than the less populous areas. As Dr. Juan Declet-Barreto, senior social scientist at the Union of Concerned Scientists, told Salon in January, "the temperatures inside the central parts of a city resemble an island, surrounded by a cooler ocean in the surrounding more rural areas."

Predictably, the consequences of this development do not strike everyone in the same way.

"This is where inequality matters, where that really starts to hit home," Wagner told Salon. In wealthier neighborhoods of Manhattan, the streets are lined with trees and people can afford air conditioning. While they will still suffer as temperatures spike due to climate change, they will not experience the intensity of living in a figurative heat island nearly as much as their less affluent civic neighbors, who tend to lack those same advantages. Poor people are "much more exposed" to all of the consequences of climate change: the storm surges, the rising sea levels (since many low-income New Yorkers live near costs) and the excessive heat.

Declet-Barreto, who recently co-authored a report by the Natural Resources Defense Council, Inc. on extreme heat in Northern Manhattan (including Washington Heights, Inwood, Central Harlem, West Harlem and East Harlem), elaborated on how these inequalities wind up arising. For instance he and his fellow researchers found that Inwood, which is on the northern end of Manhattan just north of Washington Heights, registered some of the highest surface temperatures. Declet-Barreto also found that hotter areas were also those with the least amount of "green spaces, shading visitation, other parks and the higher amount of heat retaining surfaces like roadways, cement, asphalt, dirt logs and so on."

He noted that, in his study, he also found that extreme vulnerability to the effects of climate change was high especially among people of color and people living with low incomes.

"When we're looking at the distribution of extreme heat in New York City or specifically in Northern Manhattan, we can see from surface temperature maps that it is very unevenly distributed," Declet-Barreto added.

As Wagner mentioned earlier, the New York City government is aware of this problem, and has created the NYC Mayor's Office of Climate Resiliency to address it.

"The purpose of our resiliency strategy is to prepare New York City to withstand the climate impacts of the present and the future," Jainey Bavishi, director of the program, told Salon by email. "We are doing everything from constructing massive flood protection infrastructure projects along the coast to implementing climate-smart building codes to planting thousands of trees in our most heat-vulnerable neighborhoods."

While these programs may help New York City, the fact remains that four of the city's five boroughs are either islands or part of islands, and therefore the policies that may save New York are not automatic fits elsewhere. The broader lesson in terms of New York City is that people need to start being aware of climate change and adopt a proactive attitude toward addressing it.

"I think it's also really important just to remember that there's a lot of hope there too," Garner told Salon. "In recent years we're seeing plenty of reason to hope, whether it's the youth climate movement really bringing issues to light or really starting to see governments start to agree to things like the Paris Agreement."

She added, "I think we just need to maintain that hope and realize that we are the problem here. Our emissions are warming the planet, but that means we can be the solution too."