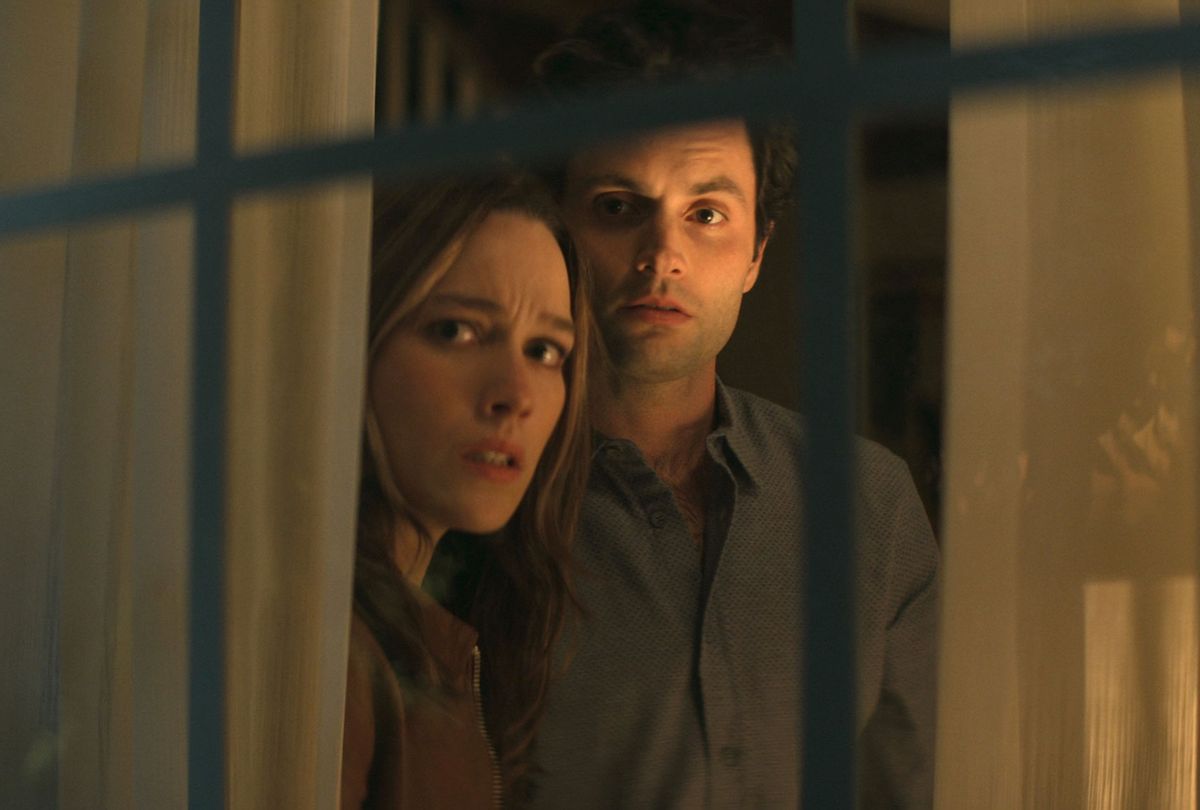 Victoria Pedretti and Penn Badgley in "You" (Netflix)
--

"Why don't you love me anymore?! You know why and just won't say it!"

Love Quinn (Victoria Pedretti) screams her anger and frustration at her partner Joe (Penn Badgley) in the new season of Netflix's psychological thriller "You." The couple of serial killers, now parents to newborn Henry, are burying yet another body together, as such couples do, in the rain.

The explosive exchange takes place months after the events of the previous season when the couple first met and fell for each other in Los Angeles. Fast-forward to the finale, and it's revealed that like Joe, Love is a serial killer. Despite their shared bloodthirst, Joe became enraged when he learned that she had targeted his neighbor, and is on the brink of killing her in turn.

"You had a f**king hook to my throat, and then I said I was pregnant!" Love exclaims, on the brink of tears. "Then we just went on, pretended like it didn't happen."

Although Joe makes an attempt to downplay and dismiss that almost-homicidal moment with his baby mama, Love isn't receptive.

"You act all pure and noble, like you have reasons for what you do, but when I do it, I'm crazy, I'm some manic nutjob," she says. "Oh wait, oh wait! 'She's a mom now! I guess I can't slit her throat!' [Henry] is the only reason I'm alive. How do you think that makes me feel? I can't trust you!"

Of course, as an exasperated Joe points out, neither of them can trust each other. Their body counts — and in this case, I do not mean sexual partners — speak for themselves. But for a serial killer who would put an axe in another woman's head for merely attracting Joe's interest, Love actually makes sense in this exchange.

Despite the couple's charade of suburban, marital bliss, Love knows the one and only reason her husband didn't kill her was her pregnancy. Now, all that's stopping him from killing and disposing of her is their shared child.

As with all facets of the show, it's a wildly extreme, but in some ways realistic, example of how women who become pregnant or become mothers are no longer treated as individuals, but as a dual being with their fetus or born child.

In Love's case, her pregnancy saved her life. But her frustration toward Joe's behavior extends from a greater societal issue: the dehumanization of pregnant people and mothers, whose pregnancies, culturally and politically, take on a life of their own.

It was only a few years ago that an Oklahoma lawmaker introducing a bill that required the consent of the father of the fetus for someone to have an abortion, broke the internet for declaring pregnant people are just "hosts."

"I understand that they feel like that is their body," state Rep. Justin Humphrey said. "I feel like it is a separate — what I call them is, is 'You're a host.' And you know when you enter into a relationship, you're going to be that host, and so, you know . . . then take all precautions and don't get pregnant."

Love's paranoias and insecurities, which drive her to commit literal murder, revolve around the question of whether Joe spared her life as the woman he loves or as the "host" of their then-unborn child.

The premise of pregnant people as "hosts" sounds like a line from a particularly sexist alien movie, but it's a premise that's become deeply embedded in our politics. Beyond Oklahoma Rep. Humphrey saying the quiet part embarrassingly loud, other states have tried to enact laws that treat pregnant people as "hosts," with similar requirements that the father of the fetus consent to someone's abortion.

And in 2019, an Alabama judge allowed a man to sue an abortion clinic on behalf of a woman's aborted fetus, as the father of the fetus. At the heart of the ultimately unsuccessful lawsuit lay a fundamental question of personhood, and how legal and cultural recognition of an unborn fetus' personhood comes at the cost of the pregnant individual's.

Love may be mentally unbalanced for a number of reasons, not the least of which include murdering and kidnapping anyone who wrongs her. But questioning whether Joe even perceives her as a human being in her own right, and not just the mother and vessel of his child, isn't inconceivable at all given their history.

She's also right about the latent sexism in how Joe perceives his murders versus hers. The couple's penchants for brutal killing present an extreme example of the double standards in how we treat men and women's rash decisions: Joe sees his horrific murders as passionate and romantic acts, while he deems Love's motivations as crazy.

They're both — and this cannot be stressed enough — psychopathic, wildly dangerous people. But the vastly different ways that they understand their equally crazy behaviors are applicable to plenty of more appropriate situations in which women are treated as irrational and unstable for performing acts we celebrate or romanticize in men.

Joe and Love are ultimately successful in doing away with the corpse, despite their scream-sesh in the pouring rain. They even go on to work things out in couple's therapy, at least for a time, as their clueless therapist assures them "50% of my married couples want to kill each other."

But Love's fears of the husband who spared her life solely because of her pregnancy persist — and her paranoia ultimately propels "You" into its most shocking season finale yet.

"You" Seasons 1-3 are now streaming on Netflix.