How the WNBA is light years ahead of its male counterpart 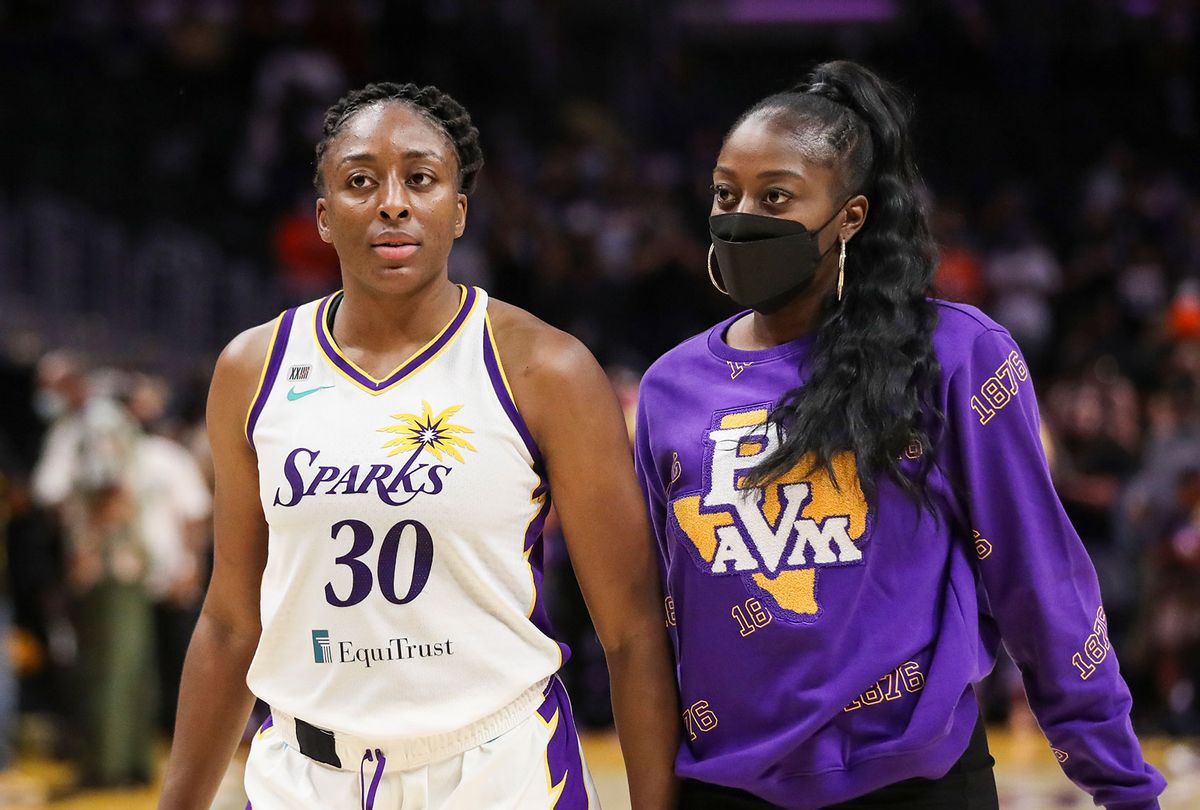 Forward Nneka Ogwumike #30 and forward/center Chiney Ogwumike #13 of the Los Angeles Sparks walk to greet fans after the game against the Seattle Storm at Staples Center on September 12, 2021 in Los Angeles, California. (Meg Oliphant/Getty Images)
--

Amid news that vaccine mandates have spawned chaos in the NBA, following a number of top players vocally espousing anti-vaccine views, the WNBA simply can't relate.

Coming off the Chicago Sky's victory over the Phoenix Mercury for the 2021 championship this weekend, WNBA players are making it clear their off-season doesn't mean they'll be taking a vacation from advocating for public health and social justice

The league already leads all other sports leagues in the nation with a 99% COVID vaccination rate, reports Sports Illustrated. But on Sunday, the WNBA Players' Association also unveiled a full-page ad in the New York Times, in partnership with Planned Parenthood, SisterSong Women of Color Reproductive Justice Collective, and other organizations in support of access to reproductive health care. Nneka Ogwumike, Chiney Ogwumike, and Layshia Clrendon, the first openly non-binary player in the WNBA, are among just some of the players who signed and helped organize the full-page ad.

"Reproductive rights are human rights. Family planning is freedom," the ad reads. It's a direct response to the near-total abortion ban in Texas, which prohibits abortion before most people know they're pregnant, and places a bounty on abortion providers and patients to incentivize lawsuits against them.

Using gender-neutral language to acknowledge how women aren't the only people who can become pregnant, the ad continues: "Abortion, birth control, and fertility care are vital — not just for athletes who can get pregnant, but for all families and gender identities. . . . We as members of the WNBPA are proud to stand with everyone who's fighting back against the cruel abortion bans in Texas and across the country.

"We invite you to join us in speaking out against oppressive laws — and lawmakers — that dehumanize us, deny our fundamental freedoms, and attempt to dictate our most basic rights."

It's a statement that speaks for itself at a time of terrifying attacks on bodily autonomy, reproductive health care, and the health and safety of all pregnant-capable individuals. The ad and its powerful message certainly fly in the face of the conventional wisdom that the NBA is the most social justice-oriented pro-sports league.

To be clear, a number of NBA players have certainly been vocal on crucial issues of racial justice, organizing in the wake of racist police shootings and killings last summer. The Brooklyn Nets' Kyrie Irving, who's more recently caused a stir for refusing COVID vaccination and being unable to play as a result, was among the players who organized a strike to pressure the league to take action in response to police violence.

But the women of the WNBA, and especially its players' union, have consistently led the way in massive collective actions — from vocal political messages throughout the Georgia Senate special election race that took place in January, to now, uniting to support health providers and call out dehumanizing attacks on pregnant people.

This sort of unity and collective action certainly contrasts with the current, internal ruptures on vaccines within the NBA. Anti-COVID vaccine players and those who support their individual "freedom to choose" have seemingly given no consideration to how other people are affected by the public health risks inflicted upon others by their decision to not take a life-saving vaccine. The pandemic and vaccinations ultimately present not just a life-or-death public health issue, but also a social justice one, as the communities that are most vulnerable to COVID tend to be communities of color and low-wage essential workers.

Per reporting from the Rolling Stone, social media misinformation and conspiracy theories were a driving force in NBA players like Kyrie Irving, Andrew Wiggins, and others developing anti-vaccine viewpoints and putting themselves and others at risk by not taking the vaccine. In contrast, the WNBA prepared extensively to combat anti-vaccine misinformation by convening to roll out a vaccine education campaign as early as last winter, Sports Illustrated reports.

This campaign would include "one-on-one outreach to players to gauge their concerns." This focused outreach, led by the players themselves, would "form the basis of panels with health care professionals on Zoom, where the focus would be on creating an open, shame-free space for everyone to ask questions." These efforts, spearheaded by the WNBA players' union executive director Terri Jackson, ultimately culminated in the WNBA becoming the first North American sports league to reach a 99% vaccination rate.

Even prior to the WNBA's massive, community-oriented vaccine information campaign, it was already widely recognized — including by the New York Times — as the most progressive pro-league in the nation. According to the Times, players who were interviewed said the dynamic, unified activism among players has been "borne of necessity in a league dominated by Black women, many of them lesbians."

Today, as Jackson and other players have said of their full-age ad in the Times, this level of speaking out specifically against abortion bans and in support of the full spectrum of reproductive care is new ground for the WNBPA. But it's perfectly in line with their long history of vocally tackling the intersections of public health and social justice. And it's a reminder that if you're sick of the pettiness, selfishness and conspiracy theories that have overrun the NBA lately, there's another league that's equally talented, and exponentially more community-oriented.