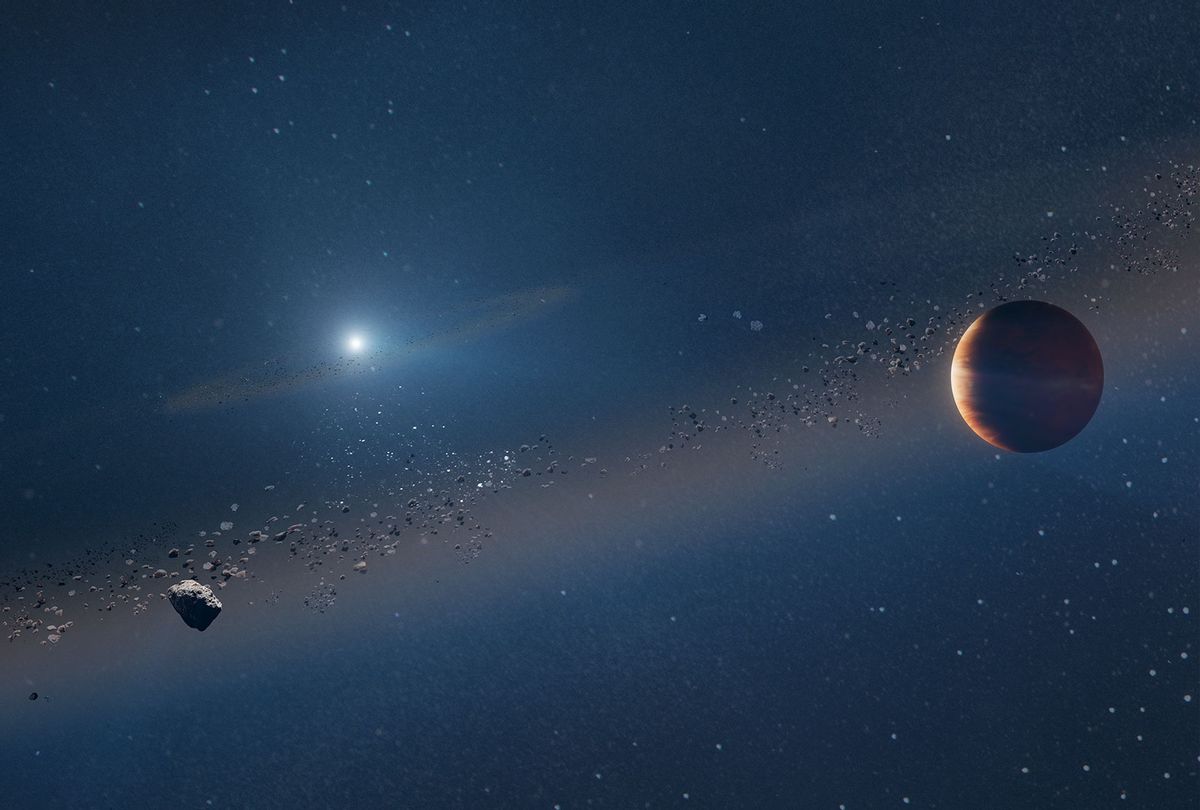 ARTIST’S RENDITION OF A NEWLY-DISCOVERED JUPITER-LIKE EXOPLANET ORBITING A WHITE DWARF, OR DEAD STAR. THIS SYSTEM IS EVIDENCE THAT PLANETS CAN SURVIVE THEIR HOST STAR’S EXPLOSIVE RED GIANT PHASE AND IS THE VERY FIRST CONFIRMED PLANETARY SYSTEM THAT SERVES AS AN ANALOG TO THE FATE OF THE SUN AND JUPITER IN OUR OWN SOLAR SYSTEM. (W. M. Keck Observatory/Adam Makarenko)
--

Stars, much like humans, go through different stages of life, from birth through middle age through senescence. At the moment, our solar system's sun is in its yellow dwarf stage of life — essentially middle age for a star of its class.

But that won't always be the case. Earth's sun is about 4.5 billion years old, but in another five billion years, the sun will eventually run low on hydrogen fuel. After that happens, it will expand into a red giant and engulf many of the inner planets, and perhaps mess up the orbits of outer ones. (Scientific models conflict on exactly which planets will be engulfed and how orbits might be adjusted.) After expansion, the sun will contract until it becomes a white dwarf, at which point it will no longer produce any heat of its own, and rather will slowly cool for all eternity. Nothing in the universe lives forever.

While humans on Earth won't be around to see what happens at the end of the sun's life, other star systems in the universe can theoretically provide glimpses of our solar system's future — if only we could find one that was similar enough to ours.

Now, it seems, astronomers have. In a ​new study published in the journal Nature last week, astronomers observed the first planetary system that resembles the future trajectory of our own solar system. What they found is that even after the sun's death, there might be some surviving planets that stick around.

Using the W. M. Keck Observatory in Hawaii, astronomers observed a Jupiter-like planet that is revolving around a white dwarf near the center of the Milky Way. The planet in question is an estimated 40 times more massive than Jupiter.

"This evidence confirms that planets orbiting at a large enough distance can continue to exist after their star's death," said lead author of the study, Joshua Blackman, a researcher at the University of Tasmania in Australia, in a news release. "Given that this system is an analog to our own solar system, it suggests that Jupiter and Saturn might survive the Sun's red giant phase, when it runs out of nuclear fuel and self-destructs."

This is a pretty remarkable discovery considering the violence that coincides with the death of a yellow dwarf star like our sun. When a yellow dwarf burns off all the hydrogen in its core, it balloons into a red giant star. From there, it collapses into a very faint white dwarf. The small size of white dwarfs is partly why it has been so difficult to detect a planetary system orbiting a white dwarf until now.

But while this might be good news for the outer gas giants, does this mean that Earth could survive the sun's death?

"Earth's future may not be so rosy because it is much closer to the Sun," said co-author David Bennett, a senior research scientist at the University of Maryland and NASA's Goddard Space Flight Center. "If humankind wanted to move to a moon of Jupiter or Saturn before the Sun fried the Earth during its red supergiant phase, we'd still remain in orbit around the Sun, although we would not be able to rely on heat from the Sun as a white dwarf for very long."

The team of scientists used a technique called gravitational microlensing to confirm their observations. In his General Theory of Relativity, Albert Einstein predicted that objects of large mass, things like black holes or stars, would distort space-time around them. Hence, light bends and distorts around these massive objects. Occasionally this is to the advantage of astronomers, as objects that are generally too distant or dim to observe directly can be briefly magnified by passing massive astrophysical bodies from the perspective of us on Earth. Such observations are known as gravitational microlensing events. It is not a common means of observing exoplanets, or planets in other solar systems; as Salon has previously reported, only 2% of discovered exoplanets have been found via microlensing.

In this case, astronomers tried to look for the planet's host star, and were surprised to discover that its starlight was not bright enough to constitute an ordinary, main sequence star. This helped rule out the possibility of the host star being anything besides a white dwarf.

"We have also been able to rule out the possibility of a neutron star or a black hole host. This means that the planet is orbiting a dead star, a white dwarf," said co author Jean-Philippe Beaulieu, an astrophysics professor at the University of Tasmania. "It offers a glimpse into what our solar system will look like after the disappearance of the Earth, whipped out in the cataclysmic demise of our Sun."