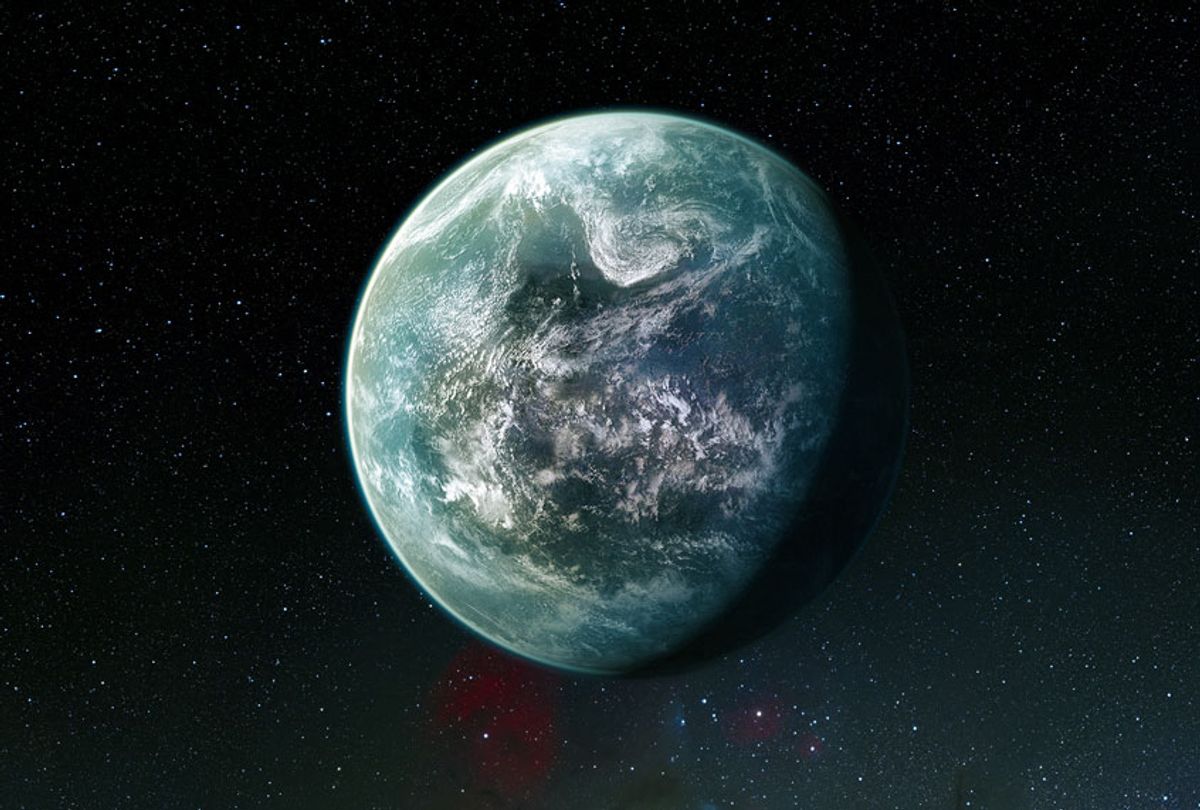 This artist’s impression shows the planet orbiting the Sun-like star HD 85512 in the southern constellation of Vela (The Sail). This planet is one of sixteen super-Earths discovered by the HARPS instrument on the 3.6-metre telescope at ESO’s La Silla Observatory. This planet is about 3.6 times as massive as the Earth and lies at the edge of the habitable zone around the star, where liquid water, and perhaps even life, could potentially exist. (ESO/M. Kornmesser/Nick Risinger)
--

It is only human to look to the cosmos and ponder if there is another Earth out there. Fortunately, while many members of our species have had our heads pointed towards the ground amid the pandemic, astronomers are looking up at the sky — and lo and behold, they've found a new "super-Earth," the designation for rocky planets more massive than ours, yet with similar conditions otherwise. The finding is one of only a handful of super-Earths discovered to date.

Astronomers at the University of Canterbury in New Zealand came across what the lead author Dr. Herrera Martin describes as a rare planet which has a similar size and orbit to our Earth. The planet has been dubbed OGLE-2018-BLG-0677Lb. Their findings were published in the Astronomical Journal earlier this month.

According to the astronomers' data, this super-Earth's year lasts about 617 days. It travels around a single star that is estimated to be 10 percent less massive than our sun, although its parent star is significantly dimmer; researchers say it could be a dim dwarf star or a "failed star." The planet itself is estimated to be four times Earth's mass, and is located near the Milky Way's central bulge of stars.

One of the most peculiar aspects of this exoplanet's discovery is the way that it was made. The majority of exoplanets that have been discovered so far were found via the "transit method," in which an exoplanet's plane of orbit around their parent star was parallel with our view from Earth. In these cases, the orbiting exoplanet periodically transits in front of its parent star, briefly dimming it from the perspective of us on Earth. Such periodic occlusions can be tracked to determine a planet's mass and size.

Yet OGLE-2018-BLG-0677Lb was discovered via a different means known as gravitational microlensing. In his General Theory of Relativity, Albert Einstein predicted that objects of large mass, things like black holes or stars, would distort space-time. Hence, light bends and distorts around these massive objects. Occasionally this is to the advantage of astronomers, as objects that are generally too distant or dim to observe directly can be briefly magnified by passing massive astrophysical bodies from the perspective of us on Earth. Such observations are known as gravitational microlensing events, and they are rarely so fortuitous: only 2% of discovered exoplanets have been found via microlensing.

"The combined gravity of the planet and its host star caused the light from a more distant background star to be magnified in a particular way," Dr Herrera Martin explained in a press statement. "We used telescopes distributed around the world to measure the light-bending effect."

The microlensing effect is rare, too: an estimated one in a million stars in the galaxy can be affected by it at any given time. Moreover, astronomers say that this kind of observation rarely repeats itself, and the probability of catching a microlensing planet are very low; usually single stars are observed through the lens. In other words, this observation was a bit of a miracle.

"These experiments detect around 3,000 microlensing events each year, the majority of which are due to lensing by single stars,"  Dr. Albrow, the paper's co-author, said.

This microlensing event was detected in 2018 by the Optical Gravitational Lensing Experiment (OGLE) using a telescope in Chile, and the Korea Microlensing Telescope Network (KMTNet). Analyzing the data took years.

Though this super-Earth likely does not have optimal conditions for life, such discoveries help give insight into the nature of planetary and solar system development. "In the study of astronomical bodies, the search for extra-solar planets is of particular interest as their characterization not only allows us to infer the similarities or differences in the mechanisms of their formation, but it also helps us to better understand our own solar system," the researchers write in their paper.

As mentioned earlier, there are a small number of super-Earths in the galaxy that we know of so far. In 2016, researchers discovered Proxima Centauri b, an exoplanet in the nearest star system to Earth, Alpha Centauri. Proxima Centauri b is believed to have a similar mass to Earth, yet has a short orbital period of only 11 days. While it is within Proxima Centauri's habitable zone, it is tidally locked, which means only one side of the planet faces its sun. Tidally locked planets are less likely to be hospitable to life, as one side of these worlds would be very hot and the other extremely cold. However, some theorists believe that there may be a "ring" of habitability at the boundary between the hot and cold side, where the sky would appear to be in perpetual twilight, and within which life could theoretically thrive.