Did Trump watch Moscow hookers urinate? Even the question is an example of everything that's wrong with media 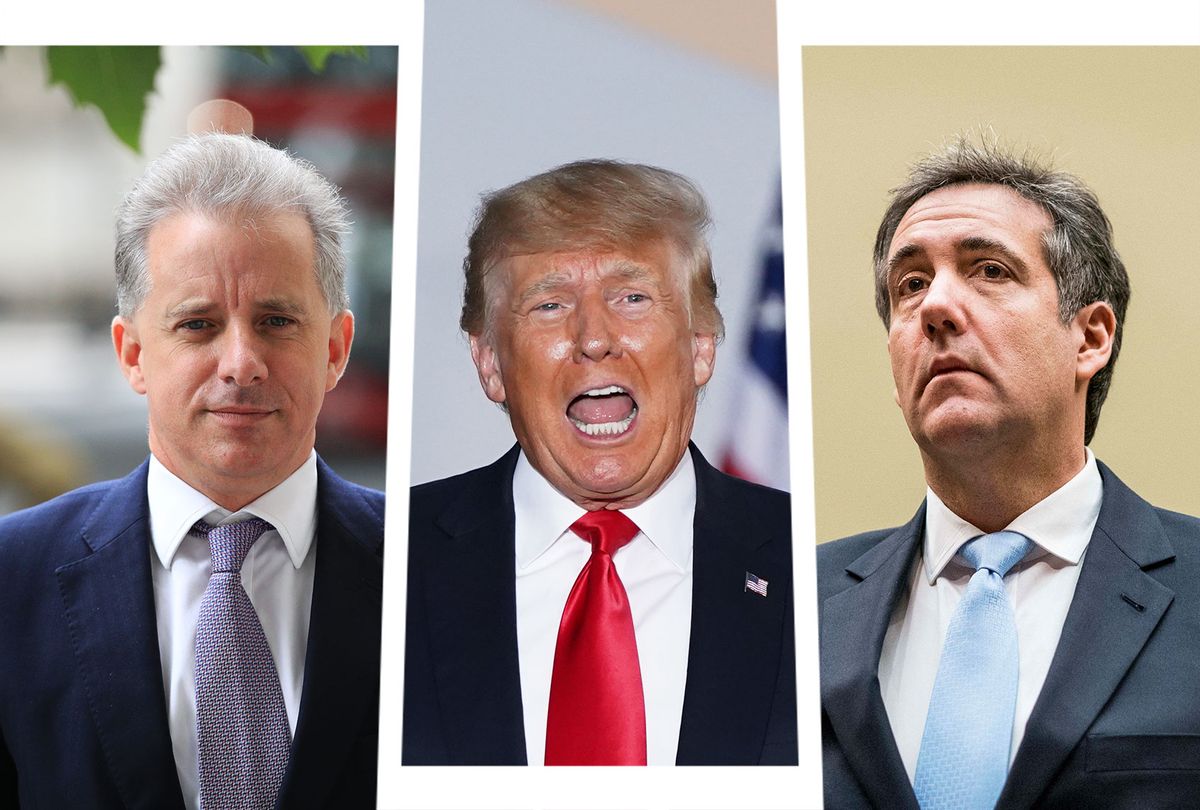 I might be in the minority here: I don't care where Moscow hookers micturate while Donald Trump watches.

Plenty of my brethren in the world of journalism, however, are interested. That became obvious this week when former British intelligence officer Christopher Steele made the rounds. He was featured in a segment on ABC News last weekend and mentioned in dozens of articles promoting the new documentary "Out of the Shadows: The Man Behind the Steele Dossier." In the news coverage, Steele said there are "probably" videotapes out there showing the aforementioned prostitutes delivering a golden shower on a hotel bed while Trump smiled and watched.

These allegations have been around since the dubious "Steele dossier" surfaced four years ago. I didn't care then, and don't care now. In fact I am curious — outside of the prurient and salacious childlike snickering that inevitably takes place — why anyone would care. Trump is a proven misogynist, a racist and a ball of pestilent, narcissistic slime. His is a lifetime of using and abusing others. I need no more proof of that.

Furthermore, the Steele dossier has been proven to be riddled with inaccuracies and falsehoods.

Michael Cohen, Trump's former fixer, according to Steele, visited Prague to work on a deal for Trump, though the Mueller investigation showed conclusively this did not occur. In the face of that, Steele still maintained as late as Sunday that Cohen did go to Prague and is simply fearful of the truth being exposed. Cohen, who is still restricted to in-home incarceration, told me that Steele may next look to prove the Easter Bunny and Santa are real and that Elvis isn't really dead. "All I can say is if he's the quality of intelligence exemplified by the British, they're lucky they have us as allies," Cohen added.

Neither of these issues is news. But the ABC News segment and the resulting attention did a great job of promoting a documentary I have no desire to waste valuable time viewing.

And that's the problem with today's American media. We have arrived at a precipice where we risk our relevance (some would say we've already sailed over the cliff) by celebrating the trivial. We have converted our vast newsgathering organizations into bloated  promotional production houses. Independent newsgathering is almost non-existent.

If we aren't promoting the prurient, we are often accused of protecting the powerful instead of speaking truth to power. Take for instance, Katie Couric protecting the late Ruth Bader Ginsburg in an interview. This made news when Couric started promoting her recent autobiography. She claimed she edited out comments RBG made critical of athletes kneeling during the national anthem to protest racial injustice. Couric issued a mea culpa — but the damage has already been done. Both her credibility and that of the mainstream media in general have suffered, and once again a segment of the American public is given further reason to question the quality of the press.

Everyone, left, right and center can accuse us — and justifiably so — of shading our news coverage.  Thus we are caught in a loop of banality discussing the mundane and the prurient while failing to address in any timely fashion our perceived biases, let alone real news.

We suck up valuable airtime, bandwidth and print space with those issues, rather than spending more time talking about the insurrection, climate change, the pandemic, the economy, the actions of the current administration and the new space race (the one many Americans don't even know we're in) as well as shady and corrupt political moves on the federal, state and local level.

Each day, whether it's in the White House briefing room, on the nightly news, on cable news "shows" where panels of "experts" argue with each other for several minutes and never resolve anything and then shake hands in the green room afterward, or on local television or in local newspapers (the few that are left anyway), there is a far greater likelihood of discussing hookers and where they relieve themselves than discussing the complicated issues of infrastructure. One is easy. One is not. The American press is great at handling what's easiest.

We need to handle the more difficult issues. But for that we need seasoned, experienced reporters. We do not have that today. In fact, the United States today is one large news desert.

Hedge fund groups like Alden Global Capital are buying and gutting newspapers, as NPR reported this week. The Atlantic also recently published an article about this same phenomenon. It is so prevalent in the news industry that such hedge funds have gained the nickname of "vulture funds."

As a result, a growing number of Americans have little to no local coverage on the important issues of city councils, state houses, school boards and local police.

While many Americans share concerns about clean water, potholes, roads, bridges and whatever decisions are being made for them by local and state governments, we are constantly torn apart by national media that makes money with promotion, false equivalence, divisiveness, innuendo, propaganda and inexperienced, ignorant and arrogant reporters who have no idea what they're doing and are damn proud to do it.

The first time I walked into the Brady Briefing Room in 1986, the White House beat was dominated by dozens of reporters who had hundreds of years of collective experience. The institutional knowledge we had then simply doesn't exist today. Today's White House reporters — as well as reporters on other important beats — are less experienced and paid far less than their more experienced predecessors. And today reporters are driven by the need for clickbait and audience numbers which, in the minds of the bean counters now in charge of running journalism, justifies our existence.

Thus the bias isn't to the left or to the right in journalism. Those are symptoms of the bigger problem — the bias toward money. We chase revenue streams and deliver news that people want to read, see or hear rather than what they need to read, see or hear. So the reason why we see stories about hookers and presidents involved in displays of micturation is both because that's the entertainment the audience craves and also because the reporters covering the news often have no idea there's something better to be had, if only they had the wherewithal or the management support to get it. Experienced managers are squeezed by boards and bosses to produce large audience numbers at the expense of nuance, context and, ultimately, real news.

On the one hand we rail against politicians, but on the other we are easily controlled and manipulated by them because the institutional knowledge once possessed by the fourth estate no longer exists.

I have routinely run into reporters on Capitol Hill, and especially at the White House, in recent years who confess they were just "thrown into" the beat, have no idea how to do it and lack the relevant experience to be there.

Meanwhile, Donald Trump is fighting to keep us from reviewing his Jan. 6 records, but we're more interested in the lurid appeal of his alleged behavior with Russian hookers.

For all the discussion of diversity in newsrooms, we will never achieve progress or true diversity until there is a diversity of ownership in the media. Don't take my word for it. Listen to Ben Bagdikian, the former Washington Post editor, who said as much: "The safest way to ensure diversity of opinion is diverse ownership. But this ideal has been sacrificed by our government."

The news and information industry today is dominated by just five major companies.

I had the opportunity recently to sit on a panel at the 18th annual Diversity Conference. Sitting in on the panel with me was ABC News' John Quiñones, a veteran reporter and pioneer for diversity who has traveled throughout Central and South America covering issues during the last several decades. He pointed out that today, relatively few reporters travel to cover important issues due to budget constraints and a shrinking news environment. This limits the ability to cover news, but as I pointed out, ABC is owned by Disney — and Disney isn't lacking for money. Like other corporate owners, it merely lacks the will to cover the news the way it needs to be covered.

There is no pressure from the federal government to make media more accountable to the public — in fact the pressure is just the opposite. Bad government is inevitable when the populace is ignorant. Today city councils, state legislatures and the federal government have fewer eyes on them than ever. Trained observers with years of experience and companies large enough to take on government with lawsuits, sustained investigations, Freedom of Information requests and curious minds have been replaced by social media, corporations and individuals without the means, education or desire to challenge those who represent us.

Thus we are left today covering briefings by press secretaries who make headlines by putting down ignorant reporters from major media companies who have little to no experience doing nothing more than asking "gotcha" questions, or mediocre reporters who chide press secretaries with the line, "I knew that would be your answer."

Next we'll be covering presidential bowel movements. That scatological news is easy. You want to know where Trump does it? He does it where all politicians relieve themselves today: all over the free press and the American public. And that won't change until we change how the press conducts its business.

More from Brian Karem at the White House: