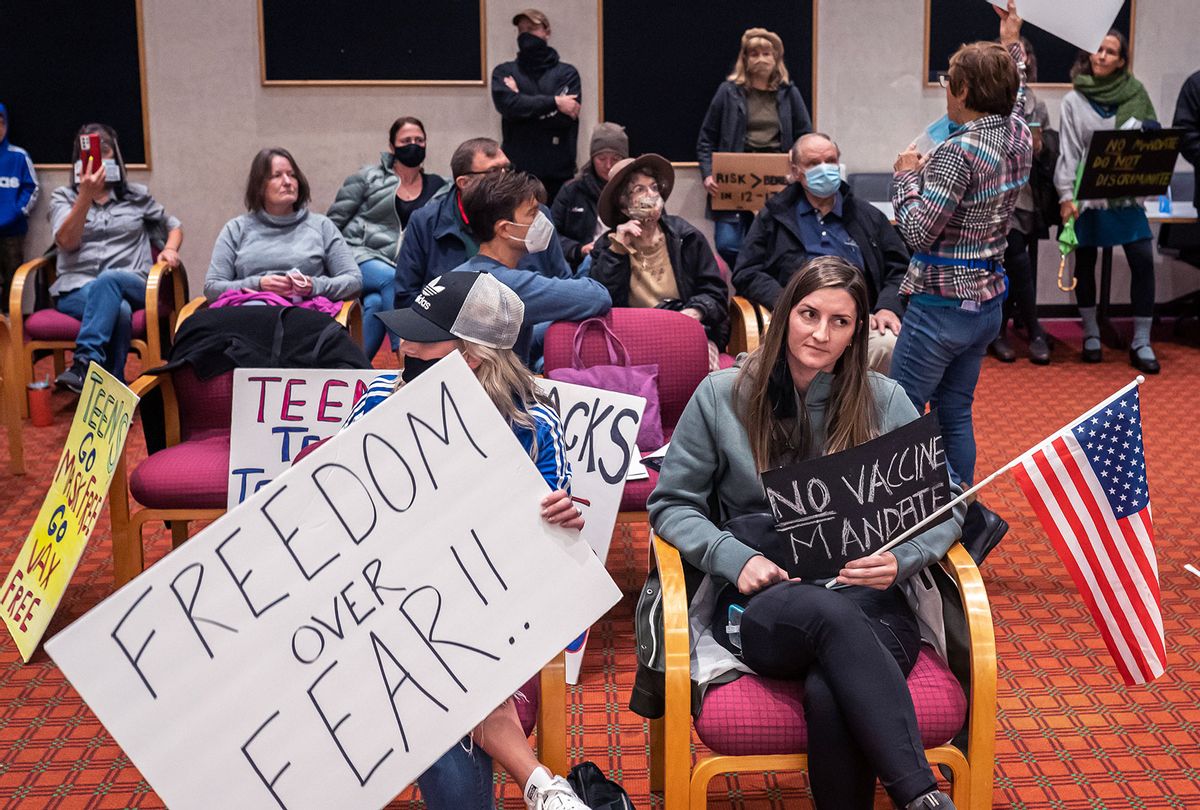 A throng of unmasked protesters affiliated with a far-right anti-government group shut down a Portland school board meeting on Tuesday after the group refused to wear masks at the request of school administrators.

The development, closely documented by journalist Sergio Olmos, comes on the heels of the Portland Public School's recently announced vaccine mandate for students twelve and older – a proposal the board is slated to vote on in mid-November. According to Olmos, the room on Tuesday was reportedly filled to the brim with roughly 150 people

"Some people have been turned away from entering for refusing to wear a mask. Inside, security has already been asking people to keep their masks on inside the building," Omos wrote as the meeting started. Eder Campuzano of The Oregonian reported that "many of the protestors admitted to coming from other counties in Oregon and Vancouver, Washington."

At one point, board chair Michelle DePass announced that the meeting would be suspended if the demonstrators refused to put on masks, according to KGW8. "I need to see 100% compliance with the mask mandate, please, or I will adjourn," she said.

But the group refused to comply.

"I will not sit down," shouted one maskless demonstrator, who wore a hat that read, "Shoot your local pedophile." He later called the board members "cowards."

Administrators reportedly attempted to de-escalate but were eventually ushered out by security and forced to conduct the rest of the meeting virtually. The group of anti-vaxxers then "rearranged chairs in the lobby," formed a circle around a speaker, and effectively held "their own meeting."

"Recall the board," they chanted. "Stop the vote!"

"It's about freedom of choice," PPS parent Sonja Feintech, who said she'd pulled her children out of public school and helped organize the interruption, told the local Fox affiliate, KPTV. "In Oregon we have exemptions. We have philosophical, religious, medical exemptions. That should be the end of it. There's no reason why a school board should be mandating anything."

Many of the protesters, a cavalcade of parents and concerned locals, are apparently affiliated with the People's Rights network, an anti-government group founded in 2020 by far-right militant Ammon Bundy. In recent years, Bundy has been arrested on many occasions for protesting Idaho state's mask mandates and stay-at-home orders. His charges have included trespassing, resisting arrest, and disrupting legislative hearings. In June of this year, Bundy announced his bid for Idaho governor, claiming that he wants to protect the state from "Joe Biden and those in the Deep State that control him."

RELATED: How the strange tale of the "Oregon standoff" explains what happened in America in 2016

For their part, several students who spoke at the meeting supported the vaccine mandate.

"I haven't talked to a single student who doesn't want the mandate. It's exciting to see students want it and discouraging parents don't want it but I think what matters is student voice and students at the end of the day, so I hope the board votes yes on a mandate," Xavier Levine, a senior at Lincoln High School, said.

"This vaccine is safe, free and effective and getting it would protect other students," student Lily Stewart said.

Over the past several months, school board meetings have emerged as one of the chief cultural battlegrounds on which conservatives have waged a crusade against common sense public health precautions across the country.

Back in August, a mob of angry anti-maskers in Franklin, Tennessee accosted health care workers leaving a Williamson County School District Board after the workers briefed attendees on COVID-19 safety measures. And earlier this month, Ohio Senate candidate Josh Mandel was booted from a Cincinnati school board meeting after barging into the event to "defend the moms and dads" against board members who were "using kids as pawns in a political game."