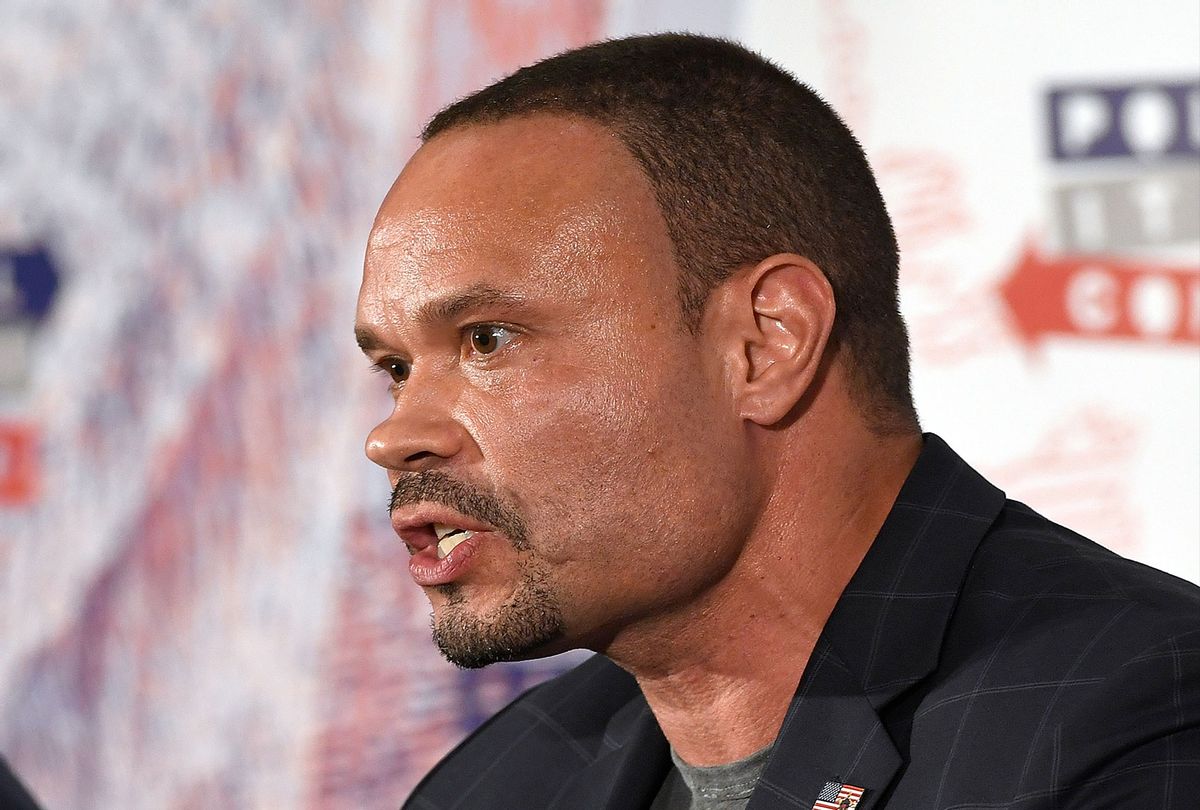 Right-wing radio star Dan Bongino is now embroiled in a surprising public feud with a fellow Cumulus Media host over the fraught subject of vaccine mandates — and may be at risk of losing his job.

Bongino declared two weeks ago that he planned to defy a company-wide coronavirus vaccine mandate, and was willing to lose his gig on that principle. Now he faces pushback from an unlikely opponent: Alabama-based Cumulus host Dale Jackson, whose views are at least as conservative as Bongino's.

Jackson has called Bongino's position "virtue signaling," saying that the thrice-failed congressional candidate had deliberately avoided an opportunity to speak out against Cumulus before the company began letting employees go over the vaccine mandate.

Jackson is a less well-known figure nationally, but has a reputation as a fire-breathing right-winger with a longtime following in the Birmingham, Alabama, area. He has said that Bongino should have quit his job if he was actually serious about confronting the Cumulus corporate mandate, suggesting that Bongino's tough talk was merely bluster.

A Cumulus employee told Salon that the company has directed employees not to comment publicly on the internal feud between Bongino and Jackson. Numerous Salon requests for comment to Cumulus went unreturned.

Last Wednesday on NewsTalk 770AM/92.5FM, Bongino, who has a known propensity for overheated phone conversations, called into Jackson's Alabama-based show to offer a piece of his mind. "You sound delirious," said Bongino. "I don't know what was in your oatmeal this morning."

Jackson responded by observing that the Cumulus vaccine mandate had been in place for weeks, and Bongino has yet to quit his radio gig. "This would have been a better conversation publicly before that vaccine mandate went into place," Jackson said.

The on-air back-and-forth continued for more than 10 minutes, with Bongino resorting to a tirade of insults. When Jackson suggested that Bongino was being abusive, the former agreed. "And you're right; I can be a prick to you because you don't seem to know what you are talking about," Bongino said. "You seem to have a really big mouth."

Jackson remained cool for the most part, calling out Bongino's "tough guy routine" and saying, "I love it. It's what got you where you are. I'm impressed all the way around." Toward the end of their exchange, Jackson suggested it was all theater, saying, "I understand you got a bit, and you are playing it."

Bongino wasn't having any. "Don't play victim," he responded. "I'm not sure if you're a leftist or not. Don't be a snowflake!"

Earlier this month, Bongino pledged to his audience that he would fight the vaccine mandate at all costs — even if it left him without a job.

"I'm not really happy with the company I work with right here," Bongino said on the air in mid-October. "I believe these vaccine mandates are unethical. I believe they're immoral. I believe they don't take into account the science of natural immunity due to a prior infection."

Bongino said that he has been vaccinated due to a pre-existing health condition, but was fighting mandates on principle, saying, "I believe they're broad-based and don't take into account an individual circumstances of why they may or may not want to take a vaccine. And they're antithetical to everything I believe in."

"So I'll say again, I'm not going to let this go. Cumulus is going to have to make a decision with me," Bongino continued, issuing his employer an apparent ultimatum. "If they want to continue this partnership or they don't. But I'm talking to you on their airwaves. They don't have to let that happen. And I wouldn't mind if they didn't. Because it's really unfortunate that people with a lower profile than me, who don't have 300-plus stations, have been summarily either shown the door or been put in really untenable circumstances because they simply want to make a medical decision by themselves."

On Tuesday's broadcast, Bongino sounded far from optimistic about his future. "The fight with them, candidly, is having a real effect," adding that the situation was "a little ugly here."

Reached for comment about the ongoing war of words, Jackson declined further comment, saying, "Dan Bongino and I have talked on the air and off, and I have nothing to say about either conversation."

Bongino did not return Salon's requests for comment on the matter. A source at Cumulus said that Bongino was on "vacation — wink, wink."

According to a report in the trade publication Radio Insight, Cumulus Media informed all employees in August that they were required to be vaccinated by Sept. 27 in order to return to work in the company's offices two weeks after that, on Oct. 11.