Many far-right MAGA Republicans view Bannon as a martyr, but critics view him as an insurrectionist 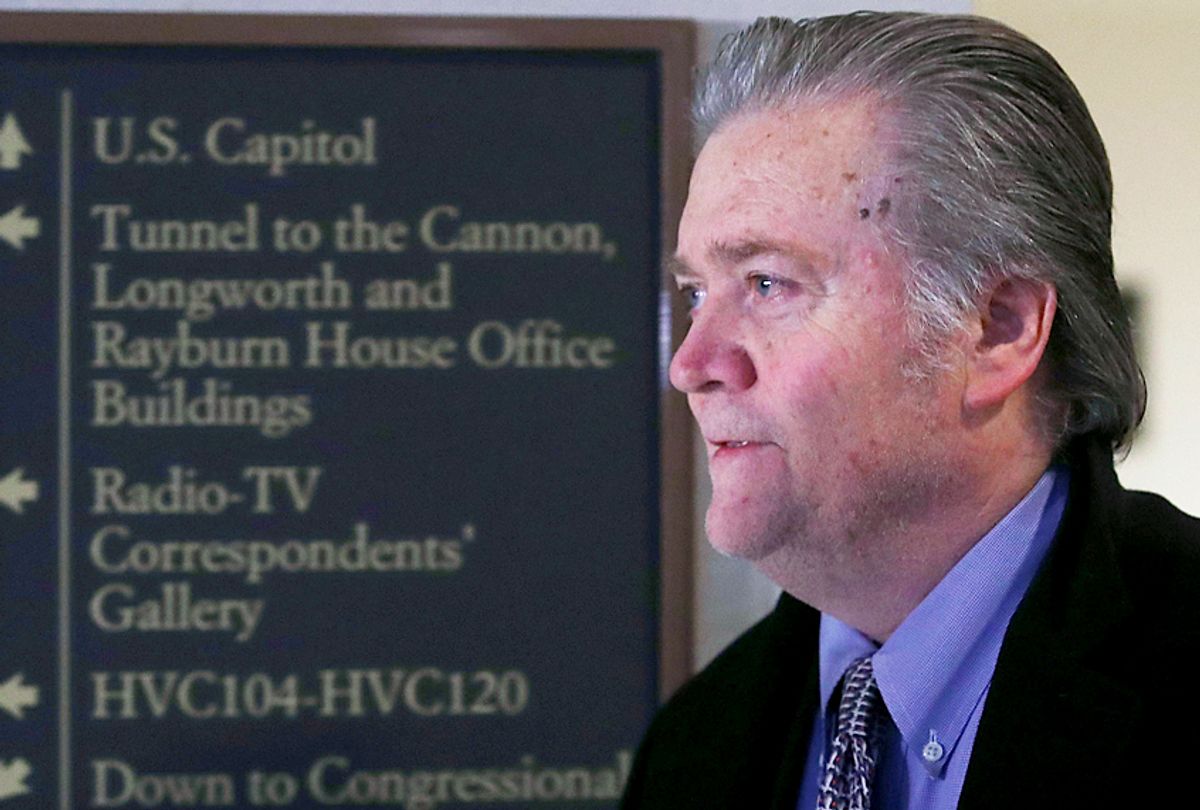 On October 21, the U.S. House of Representatives voted to hold former White House Chief Strategist Steve Bannon in criminal contempt of Congress for defying a subpoena from Speaker Nancy Pelosi's select committee on the January 6 insurrection. Many far-right MAGA Republicans view Bannon as a martyr, but critics view him as an insurrectionist. And an article by Media Matters' Madeline Peltz this week takes a damning and in-depth look at what Bannon had to say on his "War Room" podcast in the days leading up to January 6.

"In the days before the January 6 insurrection, former Trump adviser Steve Bannon bragged on his podcast about his behind-the-scenes efforts to undermine the results of the 2020 presidential election," Peltz explains. "These claims include calls and meetings he joined with conservative lawyer John Eastman and Trump lawyer Rudy Giuliani, who were then running the Trump legal team's 'war room' out of the Willard Hotel in Downtown Washington, D.C., where allies conspired to advance crackpot legal theories and misinformation campaigns aimed at stealing the 2020 presidential election from Joe Biden."

According to Peltz, "A Media Matters review has found that in addition to repeatedly boasting about his involvement with and insider knowledge of the Trump legal team's strategy to overturn the election results in Congress on January 6, Bannon previewed the events in dramatic and violent historical context and singled out then-Vice President Mike Pence as the figure who could steal the election for Trump. He also used the language of war to describe how Trump supporters should view the events of January 6 and encouraged them to travel to Washington, D.C. to participate in the rallies taking place that day."

Media Matters' timeline of things Bannon said on his "War Room" podcast spans December 28, 2020-January 5, 2021. In late December on his podcast, Bannon claimed that then-Vice President Mike Pence had "many alternatives" to certifying the Electoral College results on January 6. And on his January 2 show, Bannon featured Giuliani and Eastman and said that Giuliani was "working in the Senate" to stop the election's certification.

On January 4, Bannon told listeners, "We're hurtling towards a constitutional crisis…. (that is) going to be complicated, and it's going to be nasty." And he predicted that Trump's "first term is ending with action, and his second term is going to start with a bang."

Then, on January 5, Bannon had a lot to say about what he thought would be happening the following day. Bannon told listeners, "It's not going to happen like you think it's going to happen, OK. It's going to be quite extraordinarily different. And all I can say is: Strap in, the 'War Room' posse. You have made this happen, and tomorrow, it's game day."

Bannon predicted that a constitutional crisis was "about to go up, I think, five orders of magnitude tomorrow" and said, "We're going to go through a couple of three very turbulent 24-hour periods."

It was also on January 5 that Bannon, according to Peltz, said that Trump's allies had "put calls out last night trying to put bail up" for the Proud Boys' Enrique Tarrio, who had been arrested after tearing a Black Lives Matter banner down from an African-American church and burning it.

"At least two dozen members of Proud Boys, a violent neo-fascist street gang, face federal charges in connection with the attack on the Capitol, including four who were charged with conspiracy," Peltz notes. "Proud Boy Dominic Pezzola was among the first of the insurrectionists to break into the Capitol by smashing a window with a riot shield he stole from a police officer."