The war on Halloween: Why the right's moral panic over '80s horror movies still matters

A Halloween fable: When the Christian right tried to suppress a slasher movie — and famous film critics helped 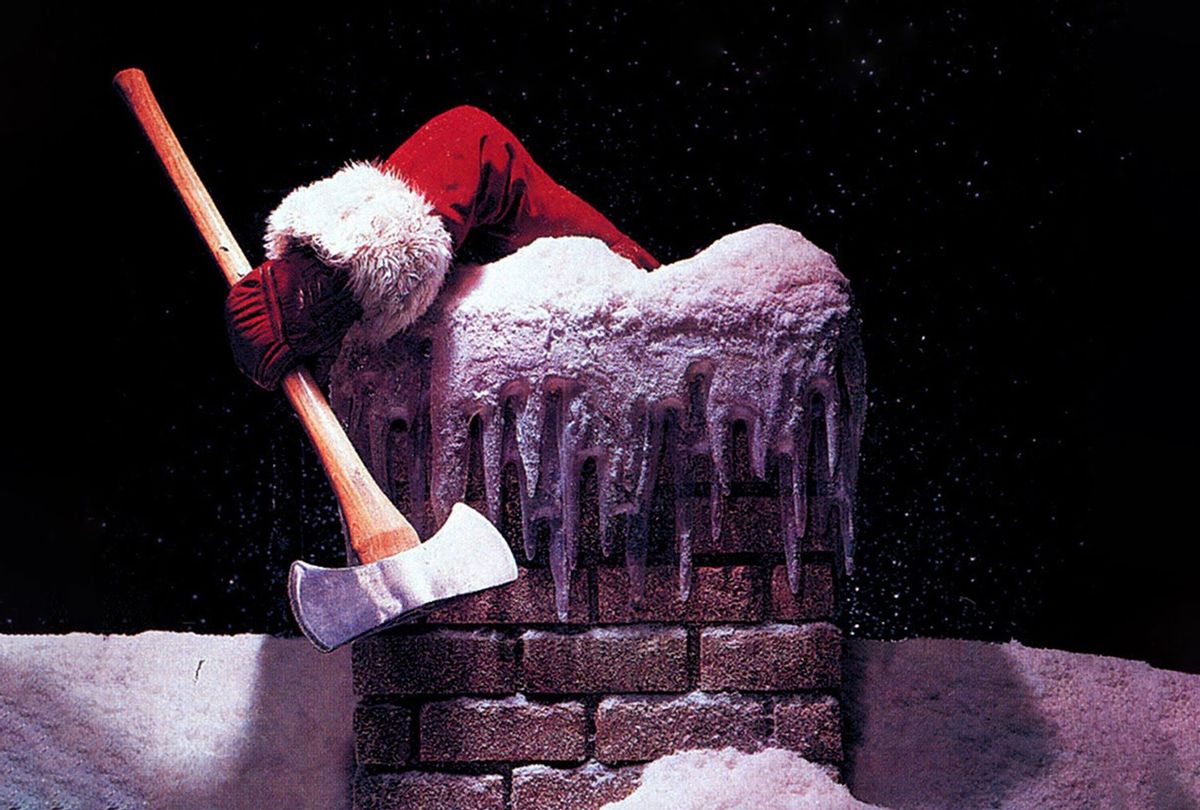 Since Halloween is a holiday devoted to celebrating the scary, you might think that every type of fright would be welcome: Decomposing zombies and slimy aliens, ferocious werewolves and bloodthirsty vampires. Yet not so long ago in a galaxy a lot like this one, an outraged right-wing mob decided that a fictional killer in a Santa Claus costume was morally unacceptable. What happened after that might seem silly or completely irrelevant, but it's connected to real-world 21st-century problems that should frighten us all.

Our tale is set during the Halloween season, circa 1984. Millions of Americans were preparing their costumes, stocking up on candy and raking up fallen red and orange leaves. In Hollywood, TriStar Pictures was trying to figure out ways to get horror fans to see its new slasher film, "Silent Night, Deadly Night." Slated for release on Nov. 9, it followed the template used by many pictures in the genre after 1978, when John Carpenter's smash hit "Halloween" combined shocking and brutal kills with a plot centered around a major holiday.

Not surprisingly, studios recognized the box office potential in applying the "Halloween" formula to the most commercialized holiday of all — Christmas. Even before "Halloween" popularized this approach, there had already been Christmas-themed horror flicks like "Silent Night, Bloody Night" in 1972 and "Black Christmas" in 1974. (The latter is believed by some to have inspired "Halloween.") "Christmas Evil," released in 1980, actually beat "Silent Night, Deadly Night" to the punch in featuring a killer dressed as Santa; this somehow slipped under the radar that year, as did another Yuletide spine-tingler, "To All a Goodnight." Even "Silent Night, Deadly Night" was joined in 1984 by a Christmas slasher called "Don't Open 'Till Christmas," which was released a month later.

Unlike its predecessors and successors, however, "Silent Night, Deadly Night" encountered a perfect storm of random bad luck. It all started on a Saturday afternoon when a grisly commercial made its way to TV stations, depicting the film's main character, Billy Chapman (Robert Brian Wilson), menacing innocent victims with an axe and a gun — while clad in Santa garb. Parents claimed it upset their children; this captured public attention, and protesters in various cities began to oppose not just the marketing of the film, but the movie itself. Organizations were quickly formed to get advertising for "Silent Night, Deadly Night" pulled from TV and newspapers. Media outlets hyped stories in which angry citizens accused a movie that hadn't been released (and which they definitely hadn't seen) of ruining Christmas and making children terrified that Kris Kringle might be a psycho killer. Many theaters buckled to pressure and pulled their screenings.

Despite this adverse publicity, it appeared for a moment that the box office run of "Silent Night, Deadly Night" would end in triumph. The film earned $1.4 million on its opening weekend — a decent return, considering that it played in fewer than 400 theaters — and TriStar declared that all would be well.

That changed, however, when film critics Roger Ebert and Gene Siskel weighed in on their popular TV show. Not content with merely saying they disliked it (neither was a fan of the slasher genre), the then-iconic pundits threw gasoline on the moral outrage fire. At one point Siskel accused everyone involved of trying to earn "blood money," scolding TriStar with the admonishment "Shame on you!" He went on to personally name the film's director, writer and producers, as well as the corporate owners of TriStar.

The gross for "Silent Night, Deadly Night" plummeted after that, and not long afterward it was pulled from theaters. Studio executives later implied that was due to its box office decline, but in fact the "Silent Night, Deadly Night" franchise was profitable enough in the long term to spawn four sequels and a remake. More likely than not, the studio simply felt that the controversy was causing them too much aggravation to be worth it.

All over a movie that the vast majority of protesters never saw.

The Power of ignorance: As goes rock 'n' roll, so goes horror...

This reactionary backlash did not occur in a vacuum, as writer Paul Corupe observes. He covers genre film and Canadian cinema for the niche publications Canuxploitation! and Rue Morgue magazine.

"There was a high-strung moral panic over horror films in the 1980s that came out of larger parental and religious concerns about popular youth culture," Corupe told Salon by email. "Slasher movies came under significant scrutiny, but heavy metal music, role playing games and even children's toys and cartoons were also targeted as having a supposed demonic or corrupting influence on children and teenagers of the era. Some believed that they had to protect their children from the devilish forces lurking in every LP record groove and VHS rental case."

Brad Jones, a culture commentator known to horror fans and film buffs for his popular online series The Cinema Snob, said he often heard moral objections to gory films while growing up around a religious community. "It was the same crowd, and would be doing the same thing, with heavy metal music or rock music," he recalled. But Siskel and Ebert weren't right-wing Christians. They had felt inundated with slasher films over the previous few years, Jones suggests, and picked this one to attack.

"A lot of these movies were kind of new, at least to the mainstream," Jones said. "There had certainly been gory horror before, but after 'Halloween' and 'Friday the 13th' [released in 1980], you definitely saw a very mainstream upswing of a lot of these slasher movies."

Stacie Ponder, a horror blogger and writer for sites like Rue Morgue Magazine and Kotaku, explained that when the trailer for "Silent Night, Deadly Night" was released amidst this cultural backlash, it supposedly "broke the brains of children."

"Parents fumed over having to explain that no, Santa wouldn't kill everyone when he came down the chimney on Christmas Eve," Ponder wrote by email. One prominent critics was legendary actor Mickey Rooney, who penned a "particularly virulent" letter calling for the filmmakers to be run out of Hollywood. (How's this for irony? Years later, Rooney would star in "Silent Night, Deadly Night 5.")

"In the long run, the notoriety only made the film more sought after," Ponder explained, adding that the lesson of all those successful sequels might be "that outrage is all well and good but it ultimately means little when there are dollars to be made."

Even if "Silent Night, Deadly Night" hadn't been the center of an absurd controversy, it might still have become a cult classic: It's actually pretty good.

"I love the movie," Jones said. "I'm a big slasher-movie guy anyway, but that one in particular does a lot of things that your typical slasher movie wouldn't have necessarily done." For one thing, because the killer is the main character, the narrative is shared through his point of view, which is rare in the slasher genre.

"The whole first half of the movie is actually this pretty interesting character piece about all the terrible things that happened in this person's life ... until at one point, halfway into the movie, he just snaps," Jones explained. "Then it definitely does a lot of slasher-movie tropes, but it had a good buildup and actually gave us this pretty interesting character. All of that was just ignored because people didn't see the movie and jumped on that outrage bandwagon." Buried beneath the blood-soaked Santa suit, "Silent Night, Deadly Night" has something a lot of slasher films lack — a unique identity, and thus cult film status.

It all worked out OK for the creators of "Silent Night, Deadly Night," but the social forces that led to the film's initial suppression still lurk among us.

As culture has been increasingly politicized, it is difficult to separate the trends that influence how we view entertainment from those that determine our relationship with politics. "Silent Night, Deadly Night" was released when the president was a right-wing former movie star named Ronald; we recently got rid of a right-wing president who is a former reality TV star named Donald. This symbolic invasion of politics by the worst in our culture trickles down to political discourse. Just as reactionaries in 1984 felt confident that they could and should suppress a work of art despite total ignorance of its content, reactionaries today will support Trump's Big Lie and attack critical race theory, without understanding why the first claim is preposterous and the latter subject is not even being taught in public schools. That same brazen ignorance is present in the resistance to public health measures on masking and vaccines, where motivated reasoning and cultural bias outweigh medical and scientific data. It exists among the ever-persistent climate change deniers.

Arguably, the stakes were pretty low in a manufactured campaign of fake moral outrage about a slasher movie that almost no one had seen. But what we see in that 1980s controversy is an embryonic form of the battles we see around us today — when public health, our educational system, our democracy and the future of the planet itself are under attack.