As COP26 convenes in Glasgow, can a "climate action army" in the streets save the world? 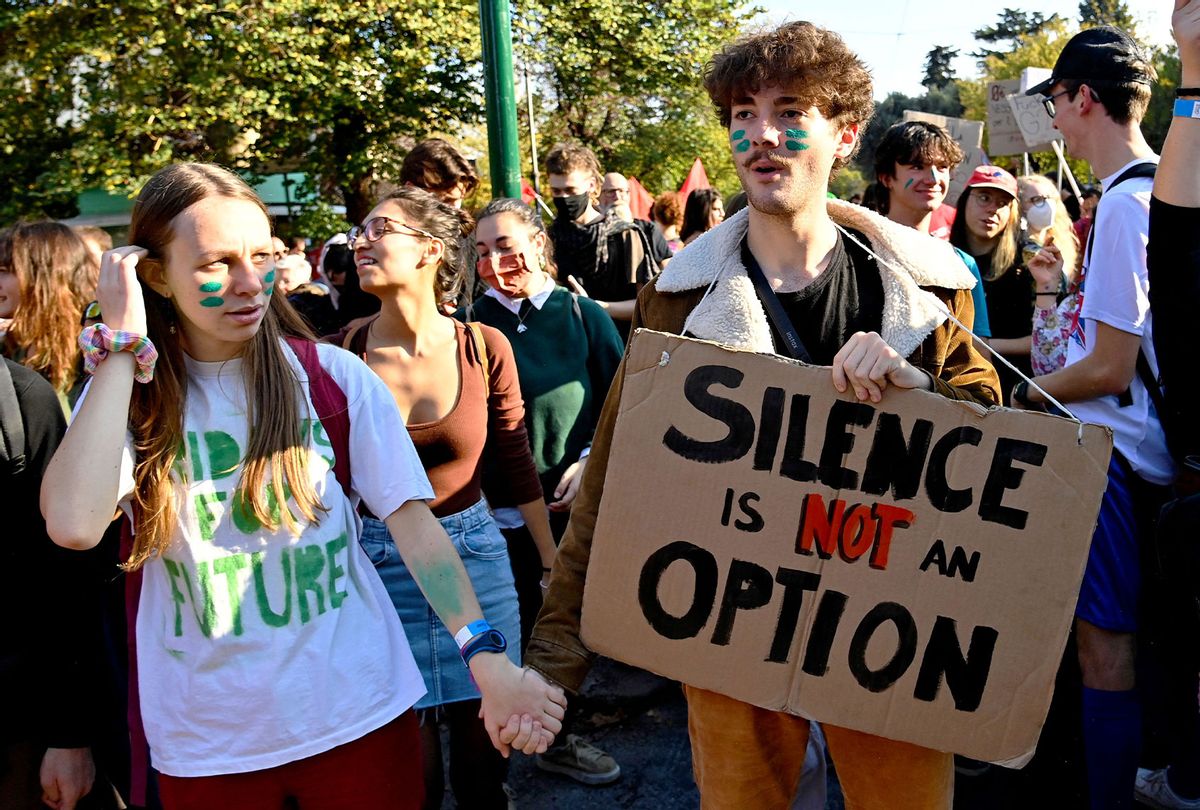 Climate activists from 'Fridays for Future' take part in a protest against the G20 of World Leaders Summit on October 30, 2021 between the Pyramid of Cestius and Circo Massimo in Rome. (ALBERTO PIZZOLI/AFP via Getty Images)
--

The current gathering in Glasgow marks the 26th time UN has assembled world leaders to try to tackle the climate crisis. But the United States is producing more oil and natural gas than ever; the amount of greenhouse gases (GHG) in the atmosphere and global temperatures are both still rising; and we are already experiencing the extreme weather and climate chaos scientists have warned us about for 40 years, and which will only get worse and worse without serious climate action.

And yet, the planet has so far only warmed 1.2° C. (2.2° F) since pre-industrial times. We already have the technology we need to convert our energy systems to clean, renewable energy, and doing so would create millions of good jobs for people all over the world. So, in practical terms, the steps we must take are clear, achievable and urgent.

The greatest obstacle to action that we face is our dysfunctional neoliberal political and economic system and its control by plutocratic and corporate interests, who are determined to keep profiting from fossil fuels even at the cost of destroying the Earth's uniquely livable climate. The climate crisis has exposed this system's structural inability to act in the real interests of humanity, even when our very future hangs in the balance.

So what is the answer? Can COP26 in Glasgow be different? What could make the difference between more slick political PR and decisive action? Counting on the same politicians and fossil fuel interests (yes, they are there, too) to do something different this time seems suicidal, but what is the alternative?

Since Barack Obama's pied-piper leadership in Copenhagen and Paris produced a system in which individual countries set their own targets and decided how to meet them, most countries have made little progress toward the targets they set in Paris in 2015.

RELATED: The big climate crisis we aren't talking about: Is nuclear winter coming?

Now they have come to Glasgow with predetermined and inadequate pledges that, even if fulfilled, would still lead to a much hotter world by 2100. A succession of UN and civil society reports in the lead-up to COP26 have sounded the alarm with what UN Secretary-General António Guterres has called a "thundering wake-up call" and a "code red for humanity." In Guterres' opening speech at COP26 on Nov. 1, he said that "we are digging our own graves" by failing to solve this crisis.

Yet governments are still focusing on long-term goals like reaching "Net Zero" by 2050, 2060 or even 2070, so far in the future that they can keep postponing the radical steps needed to limit warming to 1.5° Celsius. Even if they somehow stopped pumping greenhouse gases into the air, the amount of GHGs in the atmosphere by 2050 would keep heating up the planet for generations. The more we load up the atmosphere with GHGs, the longer their effects will last and the hotter the Earth will keep growing.

The Clean Energy Performance Program (CEPP), which was part of the Build Back Better Act, could make up a lot of that gap by paying electric utilities to increase reliance on renewables by 4% year over year and penalizing utilities that don't. But on the eve of COP26, Biden dropped the CEPP from the bill under pressure from Sens. Joe Manchin and Kyrsten Sinema and their fossil fuel puppet-masters.

Meanwhile, the U.S. military, the largest institutional emitter of GHGs on Earth, was exempted from any constraints whatsoever under the Paris Agreement. Peace activists in Glasgow are demanding that COP26 must fix this huge black hole in global climate policy by including the U.S. war machine's GHG emissions, and those of other militaries, in national emissions reporting and reductions.

At the same time, every penny that governments around the world have spent to address the climate crisis amounts to a small fraction of what the United States alone has spent on its nation-destroying war machine during the same period.

China now officially emits more CO2 than the U.S. But a large part of China's emissions are driven by the rest of the world's consumption of Chinese products, and its largest customer is the United States. An MIT study in 2014 estimated that exports account for 22% of China's carbon emissions. On a per capita consumption basis, Americans still account for three times the GHG emissions of our Chinese peers, and double the emissions of Europeans.

Wealthy countries have also fallen short on the commitment they made in Copenhagen in 2009 to help poorer countries tackle climate change by providing financial aid that would grow to $100 billion per year by 2020. They have provided increasing amounts, reaching $79 billion in 2019, but the failure to deliver the full amount promised has eroded trust between rich and poor countries. A committee headed by Canada and Germany at COP26 is charged with resolving the shortfall and restoring trust.

When the world's political leaders are failing so badly that they are destroying the natural world and the livable climate that sustains human civilization, it is urgent for people everywhere to get much more active, vocal and creative.

The appropriate public response to governments that are ready to squander the lives of millions of people, whether by war or by ecological mass suicide, is rebellion and revolution — and nonviolent forms of revolution have generally proven more effective and beneficial than violent ones.

People are rising up against this corrupt neoliberal political and economic system in countries all over the world, as its savage impacts affect their lives in different ways. But the climate crisis is a universal danger to all of humanity that requires a universal, global response.

One inspiring civil society group on the streets in Glasgow during COP26 is Extinction Rebellion, which proclaims, "We accuse world leaders of failure, and with a daring vision of hope, we demand the impossible.… We will sing and dance and lock arms against despair and remind the world there is so much worth rebelling for."

Extinction Rebellion and other climate groups at COP26 are calling for Net Zero by 2025, not 2050, as the only way to meet the 1.5° goal agreed to in Paris.

Greenpeace is calling for an immediate global moratorium on new fossil fuel projects and a quick phase-out of coal-burning power plants. Even the new coalition government in Germany, which includes the Green Party and has more ambitious goals than other large wealthy countries, has only moved up the final deadline on Germany's coal phaseout from 2038 to 2030.

The Indigenous Environmental Network is bringing indigenous people from the Global South to Glasgow to tell their stories at the conference. They are calling on the northern industrialized countries to declare a climate emergency, to keep fossil fuels in the ground and end subsidies of fossil fuels globally.

Friends of the Earth (FOE) has published a new report titled "Nature-Based Solutions: A Wolf in Sheep's Clothing" as a focus for its work at COP26. It exposes a new trend in corporate greenwashing involving industrial-scale tree plantations in poor countries, which corporations plan to claim as "offsets" for continued fossil fuel production.

The U.K. government, which is hosting the conference in Glasgow, has endorsed these schemes as part of the program at COP26. FOE is highlighting the effect of these massive land-grabs on local and indigenous communities and calls them "a dangerous deception and distraction from the real solutions to the climate crisis." If this is what governments mean by "Net Zero," it would just be one more step in the financialization of the Earth and all its resources, not a real solution.

Because it is hard for activists from around the world to get to Glasgow for COP26 during a pandemic, activist groups are simultaneously organizing around the world to put pressure on governments in their own countries. Hundreds of climate activists and indigenous people have been arrested in protests at the White House in Washington, and five young Sunrise Movement activists began a hunger strike there on Oct. 19.

U.S. climate groups also support the "Green New Deal" bill, H.R. 332, that Rep. Alexandria Ocasio-Cortez has introduced in Congress, which specifically calls for policies to keep global warming below 1.5° C., and currently has 103 cosponsors. The bill sets ambitious targets for 2030, but only calls for Net Zero by 2050.

The environmental and climate groups converging on Glasgow agree that we need a real global program of energy conversion now, as a practical matter, not as the aspirational goal of an endlessly ineffective, hopelessly corrupt political process.

At COP25 in Madrid in 2019, Extinction Rebellion dumped a pile of horse manure outside the conference hall with the message, "The horseshit stops here." Of course that didn't stop it, but it made the point that empty talk must rapidly be eclipsed by real action. Greta Thunberg has hit the nail on the head, slamming world leaders for covering up their failures with "blah, blah, blah," instead of taking real action.

Like Greta's School Strike for the Climate, the climate movement in the streets of Glasgow is informed by the recognition that the science is clear and solutions to the climate crisis are readily available. It is only political will that is lacking. This must be supplied by ordinary people, from all walks of life, through creative, dramatic action and mass mobilization, to demand the political and economic transformation we so desperately need.

The usually mild-mannered Secretary-General Guterres made it clear that "street heat" will be key to saving humanity. "The climate action army — led by young people — is unstoppable," he told world leaders in Glasgow. "They are larger. They are louder. And, I assure you, they are not going away."

More Salon coverage of the greatest existential threat to our planet's survival: