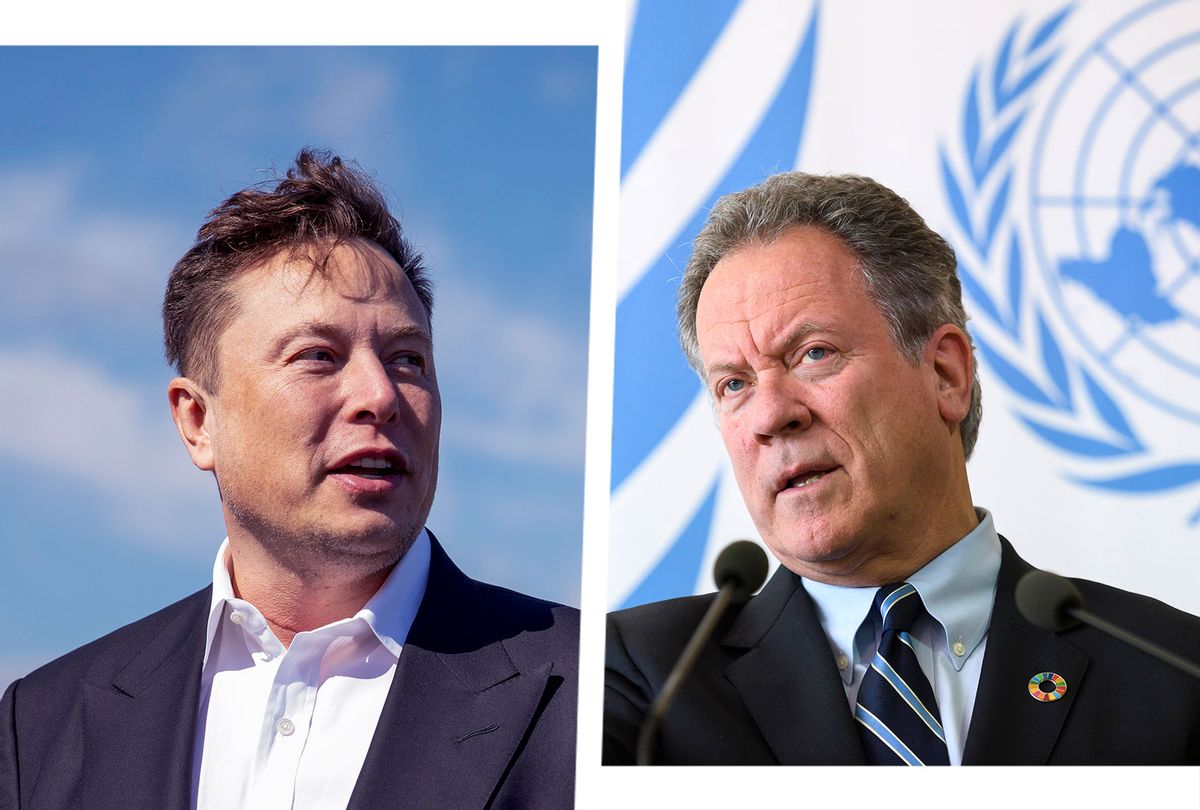 Last Sunday on Twitter, the head of the world's biggest relief organization asked the world's richest man for $6 billion. Forty-two million lives were at stake. It was Halloween night.

Musk was responding to David Beasley, the former South Carolina governor who runs the UN World Food Programme (WFP), which won the Nobel Peace Prize under his leadership. It's hard to imagine a better public image.

But while assuring Musk of transparency, Beasley didn't mention the role he has played outside the public eye as a leader inside The Family, a purposely opaque organization with a history of smuggling evangelical Protestantism, including homophobia and misogyny, in charitable packages. The Family also serves as a networking hub for right-wing activists working to roll back LGBTQ and reproductive rights.

In fact, as recently as a few months prior to joining the WFP, Beasley was said to be actively involved in building international movements of right-wing evangelicals. The men involved in these movements overseas also have ties to The Family.

Internal documents from the National Prayer Breakfast, which is run by The Family, show that Beasley, a Family board member from 2011 through 2013, submitted on his own, or with others, the names of 52 people to attend in 2016. Only five individuals got to invite more guests. Several of Beasley's guests were anti-LGBTQ leaders.

Although Beasley assured Musk that WFP has "systems in place for transparency," the WFP is not transparent about Beasley's past and current work on The Family's behalf. For months, the WFP has not responded to multiple questions from TYT concerning Beasley, including new ones emailed to WFP officials Monday afternoon. (Tesla also did not immediately respond to a request for comment.)

Family documents — and some public records — do shed some light on Beasley's activities and associations in The Family's orbit.

Beasley himself has a history of activity adjacent to anti-LGBTQ organizations. And although he handed off his Family duties after President Trump named him to run the WFP, his personal ties to The Family remain intact. He still participates in the National Prayer Breakfast and related events, and his daughter has worked on projects connected to The Family.

Beasley also has a history of participating in events involving the European Christian Political Movement (ECPM). This summer, the European Parliamentary Forum on Sexual and Reproductive Rights warned that ECPM is part of a broader right-wing movement funded by American conservatives including evangelical leader Franklin Graham, the only financial donor supporting the National Prayer Breakfast.

ECPM has been involved with prayer breakfasts and the annual "Gathering" throughout Europe, including events attended by Beasley.

Most recently, Beasley was listed in congressional travel disclosure forms as attending the May 2021 Southeast European Prayer Gathering. It's not clear whether Beasley was there in a personal capacity, but the list describes him as "WFP Exec. Director." The forms don't say so, but almost all the U.S. guests have ties to The Family. The politicians among them — whose travel has often been funded by The Family — are consistently anti-LGBTQ.

Last month, TYT reported that the Ukrainian National Prayer Breakfast — and its delegation to the 2016 breakfast in Washington — included numerous anti-LGBTQ guests. Although members of Congress, including Democrats, ostensibly invited the Ukrainians, it was actually Beasley and other Family insiders. Beasley has also attended the Ukrainian breakfast.

RELATED: What was Rep. Juan Vargas, an LGBTQ ally at home, doing at an anti-gay Christian event in Ukraine?

Two LGBTQ advocacy groups and one secular organization have warned this year that anti-LGBTQ leaders are using prayer breakfasts to network and to mainstream their positions. (TYT was able to identify only one Beasley invitee to the 2016 breakfast who was not from the right: AFL-CIO chief Richard Trumka, who died earlier this year.)

One LGBTQ group said a Democrat who attended the Ukraine event this year was "misled." Two Democrats who lent their names to the U.S. breakfast in 2016 denied knowledge of who was on the guest list.

Beasley's international work has gone beyond individual anti-LGBTQ breakfast hosts or guests. In a 2015 video produced by a religious group tied to The Family, Beasley talks about helping to start a Guatemalan version of the National Prayer Breakfast. He praises its diversity, but in reality, the Guatemalans involved are, like The Family, disproportionately socially conservative evangelicals.

In Germany, less than a year before Beasley took charge at the WFP, parliamentary member Axel Knoerig described Beasley as working to create an international network. Knoerig doesn't explain what kind of network Beasley is building, but Knoerig is an opponent of same-sex marriage and says that he and Beasley "share common Christian values."

Knoerig said in October 2020 that he and Beasley had met multiple times, including at last year's National Prayer Breakfast. It's not clear what became of their discussions about network-building after Beasley joined WFP.

Despite holding no public office at the time, in 2015 Beasley traveled to the Philippines. His host, Francisco Ashley Acedillo, was at the time an elected official there — who has supported prison time for adultery. In his post about the meeting, Acedillo thanks "our NPB International friends for their generosity." (The Family also goes by the name the International Foundation.)

Joining Acedillo and Beasley for their 2015 meeting was a Pennsylvania real-estate developer named Todd Hendricks, who is one of The Family's key men in the Philippines. He was also an early figure in The Family's radicalization of MyPillow CEO Mike Lindell.

(Lindell's nonprofits ended up paying at least two Family insiders to work for them, while shifting their philanthropic focus from addicts and veterans to evangelical causes.)

Two other Family insiders, a Texas couple, were also at Beasley's Philippines meeting. As TYT has reported, Jonathan Frank has been publicly quoted in Philippines media as a breakfast spokesperson. His wife Margie, a prodigious GOP donor, teamed up with Hendricks to support evangelical actor Stephen Baldwin in his mission work.

One year later, in 2016, Beasley was a Trump supporter, vocally if not prominently. He invited only two residents of South Carolina, the state he formerly governed, to the National Prayer Breakfast. Both had ties to then-Gov. Nikki Haley.

One of Beasley's guests was Kersey, Haley's pastor. The other was a conservative Christian businessman who had given $2,000 to Haley's campaign.

The next year, after Trump made Haley his ambassador to the UN, she sidelined the White House and State Department in landing Beasley the job of running the WFP. His résumé lacked the typical experience for the post, but his peripatetic work — carrying The Family's portfolio — had made him a lot of international friends, a helpful thing for a global relief leader.

Beasley had also spent the previous five years ministering to members of Congress on Capitol Hill. And, after Trump was elected, Beasley's Center for Global Strategies began listing humanitarian work alongside its trade initiatives.

Reportedly, though, Beasley's main draw as WFP candidate was America's wallet. Top UN officials told Foreign Policy they feared that giving WFP to anyone but Trump's choice would prompt Republicans to slash the $2 billion in U.S. funding.

Not long after Beasley took over, critics began to note a lax approach to firewalling his charitable work from his religious beliefs. And Beasley brought at least two staffers with ties to The Family into the WFP: a former Family employee and the husband of a Family associate.

The Family has a history of mixing its faith with its charitable work; seeing Jesus as the answer to worldly problems means Jesus is part of the solutions they offer. So schools and relief programs feed their beneficiaries a steady diet of scripture along with material aid. That can include proselytizing against abortion, contraception, LGBTQ rights and more; subtly or openly, depending on the cultural space.

When Family insiders support orphanages, for instance, it's typically those that rebuff potential LGBTQ adoptive families. Beasley's Center for Global Strategies promotes the "first and only pro-life crisis pregnancy center in Macedonia."

Nonprofit cash has also been an issue for Family-affiliated politicians.

Former Rep. Mark Siljander, R-Mich., went to prison for funneling alleged terrorist money through The Family (Trump pardoned him). TYT recently reported that Rep. Jeff Fortenberry, R-Neb., tried to conceal Family connections to a charity involved in illegally funding his campaign — and to conceal just how central that charity was to the scheme.

The Family's operational style is explicitly relational. Its influence stems from the friendships its people make. And Beasley is pushing to meet Elon Musk personally. On Sunday, he told Musk, "I can be on the next flight to you."

A source close to The Family said Beasley's entreaty didn't necessarily have anything to do with The Family. "That's just David's personality."

Instead, Beasley on Monday followed up with another tweet, saying, "We can meet anywhere — Earth or space." Beasley promised that if Musk would meet, he would provide full transparency on WFP's plan to feed 42 million hungry people, saying, "I will bring the plan, and open books." As of Wednesday, Musk had not responded.

More from TYT on "The Family" and the National Prayer Breakfast: