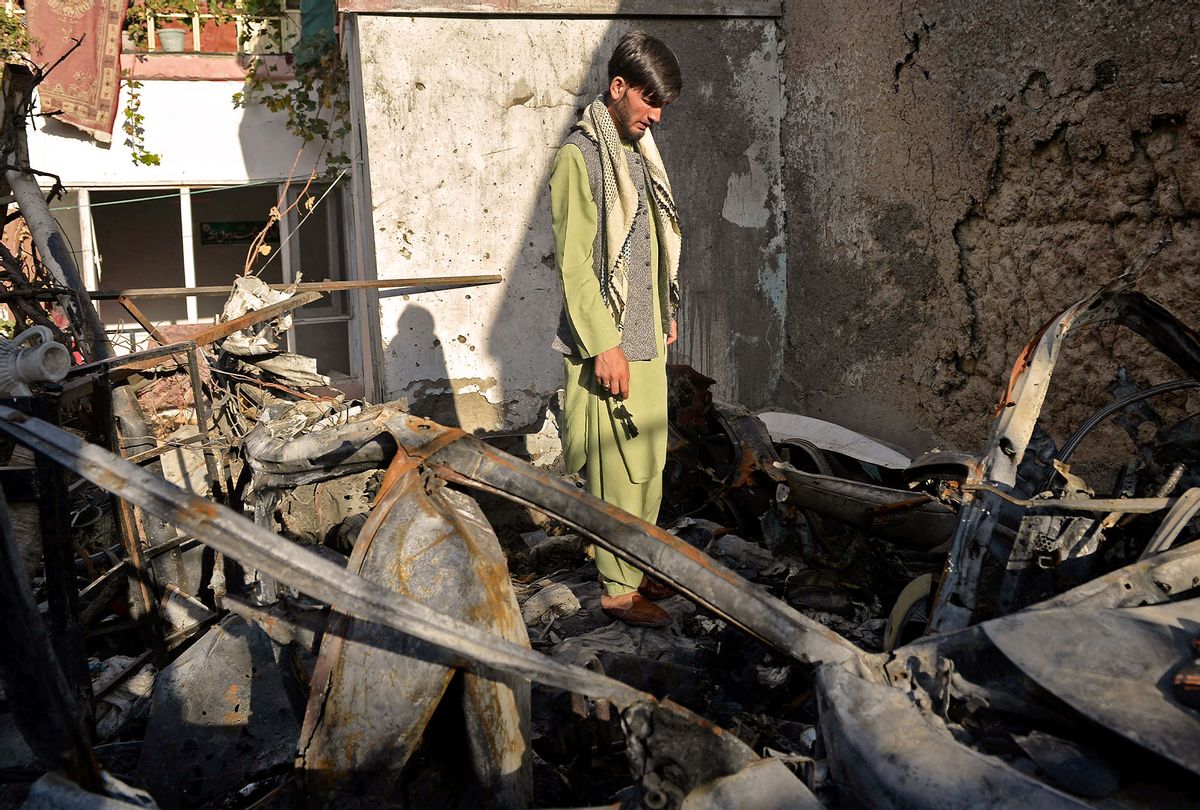 A neighbour of Ezmarai Ahmadi, stands amid the debris of Ahmadi's house that was damaged in a US drone strike in the Kwaja Burga neighbourhood of Kabul on September 18, 2021. (HOSHANG HASHIMI/AFP via Getty Images)
--

An internal review conducted by Pentagon officials found that the agency held no responsibility for mistakenly executing a "regrettable" drone strike that killed three adult civilians and seven children in Afghanistan.

The attack was originally carried out on Aug. 29 in Kabul, where the U.S. was carrying out mass evacuations of Afghan refugees in the wake of the Taliban's sudden takeover of the country's capital. The strike came just three days after a terrorist bombing at Hamid Karzai International Airport, which led to the deaths of 170 Afghan civilians and 13 members of the U.S. military, putting Pentagon officials on high alert for another bombing.

In the days leading up to what the Defense Department called a "righteous strike," top generals mistakenly identified an aid worker they thought to be an Islamic State operative living a few kilometers from the airport. According to The Washington Post, the worker was hauling cans of water – thought to be explosives – to his family.

In the immediate aftermath of the strike, Pentagon officials steadfastly claimed that no civilians had been harmed, noting that a "secondary explosion" confirmed the apparent presence of bombs on the target. After investigations by The New York Times and the Post, the Pentagon admitted there was no secondary explosion and that "the strike was a tragic mistake."

"You have to put yourself into the conditions that existed at the time," Said said. "So you can imagine the stress on the force is high and the risk to force is high, and not appreciating [the incident] through that lens, I think would be inappropriate."

"Individuals involved in this strike interviewed during this investigation truly believed at the time that they were targeting an imminent threat to U.S. forces on [the airport]," the general added, suggesting that there was no negligence anywhere in the chain of command.

Pentagon investigators consequently found that no one involved in the operation should be held criminally accountable.

"I found, given the information they have, and the analysis that they did, I understand they reached the wrong conclusions," Said said. "Was it reasonable to conclude what they concluded based on what they had? It was not unreasonable, it just turned out to be incorrect."

Though Said's report did not hold any one individual accountable for the mistake, the general noted that commanders have this discretion.

This week, the Defense Department admitted to having video evidence that there was a child in the area of the attack some two minutes before launch was executed. Said claimed that the child was, however, easy to miss in the footage.

"Two independent reviews that I conducted, the physical evidence of a child was apparent at the 2-minute point," he said. "But it is 100 percent not obvious; you have to be looking for it."

The U.S. has vowed to make "ex gratia condolence payments" to the families of those killed in the strike.