In face of mountainous evidence that Trump incited an insurrection, the attorney general faces growing pressure 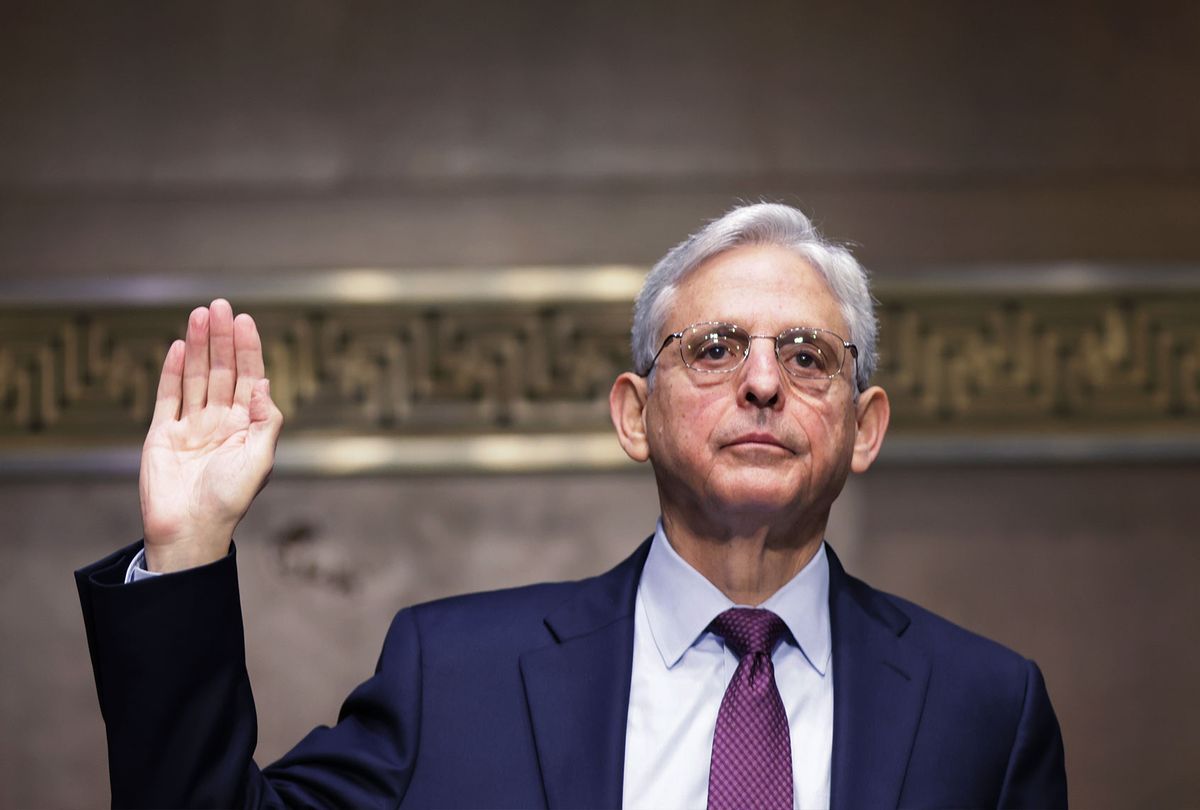 U.S. Attorney General Merrick Garland is sworn in at a Senate Judiciary Committee hearing about oversight of the Department of Justice on October 27, 2021 in Washington, DC. (Tasos Katopodis-Pool/Getty Images)
--

A nonpartisan nonprofit is calling on Attorney General Merrick Garland to resign over his apparent failure to "hold accountable former president Donald Trump and his co-conspirators for attempting to overthrow the government," suggesting that the Biden appointee is "the wrong person for this job at this time."

The group, Free Speech For People (FSFP) – started back in 2010 to combat the rise of "corporate personhood" in politics – outlined in a Thursday statement a smattering of ways in which the attorney general has allegedly abdicated his duties.

Back in January, the group urged Garland in an op-ed to assemble a specialized task force to independently investigate Trump's role in inciting the Capitol riot, for which he was later impeached. But Garland, they said, never took heed of their advice.

"If Garland had created a framework for credible, impartial criminal investigations of a former president of the United States, DOJ would have affirmed that no one—not even a former president—is above the law," the group wrote. "Yet while DOJ has charged the low-level insurrectionists who broke into the Capitol, it has not moved against the highly-placed leaders of the insurrection, including Trump himself."

Much of Trump's criminal improprieties took place in the leadup to the Capitol riot, when the former president stoked baseless outrage over a presidential election "stolen" by President Biden, the group added.

Back in January, roughly two months after his election loss, Trump made a private call to Georgia Secretary of State Brad Raffensberger asking the state official to effectively "find 11,780" votes in his favor. Furthermore, Trump and his allies put together an official plan – now known as the Eastman memo – outlining a step-by-step process by which they would illegally overturn the election by having former Vice President Mike Pence replace state electors with officials sympathetic to Trump's conspiracies of voter fraud.

"Their actions, no less than those of the individual rioters, may constitute conspiracy to impede or disrupt the orderly conduct of government business, insurrection, seditious conspiracy, and advocating the overthrow of the government," FSFP argued.

Late late month, Rolling Stone reported that several members of congress – including Reps. Paul Gosar, R-Ariz., Lauren Boebert, R-Colo., and Madison Cawthorn, R-N.C. – actively conspired with multiple organizers of the Capitol riot, convening meetings with the organizers during the leadup to the insurrection. Despite sitting on clear evidence of criminality, Garland has so far "failed to investigate" any of these lawmakers, FSFP said.

RELATED: GOP congressman says he would be "proud" to learn his staff helped plan "Stop the Steal" rally

"For all these reasons, Garland is no longer fit to serve as Attorney General," the group wrote. "But as long as Trump and his co-conspirators walk free, American democracy is in danger. We need an Attorney General who understands that danger and is willing to take action to protect democracy and the rule of law."