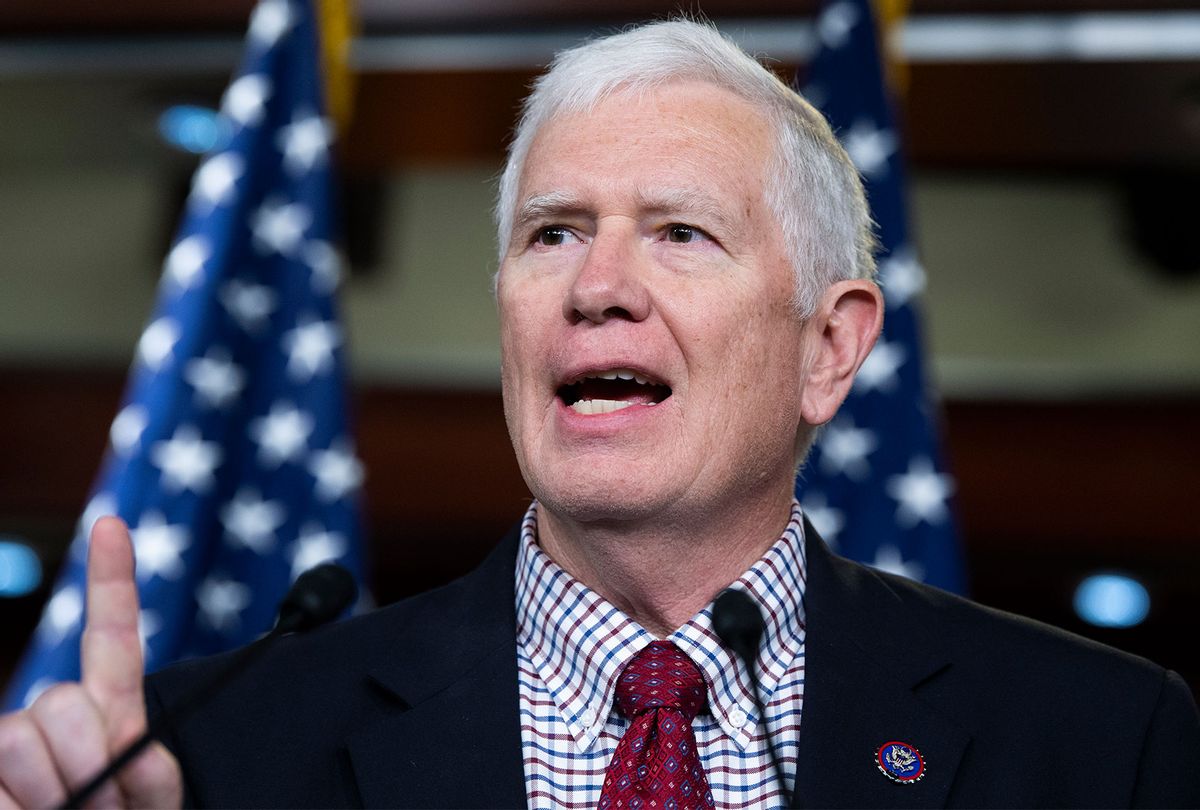 Rep. Mo Brooks, R-Ala., appeared to shift blame to his staff while also heaping praise on them following a report that he and other Trump-friendly lawmakers had meetings with organizers of the Capitol riot.

"I don't know if my staff did," Brooks told CNN when asked if he played any part in planning the "Stop the Steal" rally in Washington, D.C. on Jan. 6. "But if they did I'd be proud of them for helping to put together a rally lawful under the First Amendment at the ellipse to protest voter fraud & election theft."

In a recent report from Rolling Stone, two right-wing organizers of the "Stop the Steal" rally alleged that Reps. Marjorie Taylor Greene, R-Ga., Paul Gosar, R-Ariz., Lauren Boebert, R-Colo., Madison Cawthorn, R-N.C., Andy Biggs, R-Ariz., and Louie Gohmert, R-Texas, corresponded with them ahead of the demonstration on January 6. The sources reportedly described "dozens" of briefings with these lawmakers and were at one point offered "blanket immunity" in another investigation to sweeten the deal.

Brooks, the first member of Congress to formally object to President Biden's win in the 2020 election, spoke at the rally beforehand.

"Today is the day American patriots start taking down names and kicking ass," he said during his speech, during which he wore body armor.

Shortly after the insurrection, Brooks was sued by Rep. Eric Swalwell, D-Calif., who alleged that the Republican – along with Donald Trump, Donald Trump Jr., and ex-Trump attorney Rudy Giuliani – were responsible for the civil damages incurred by the riot. Brooks has sought immunity from the suit, claiming the speech was part of his official duties, but the Department of Justice has refused to defend him. Brooks reportedly spent a week dodging private investigators hired by Swalwell in order to avoid being served the papers for the suit.

In a July court filing, Brooks attempted to bat away the lawsuit by ostensibly putting the blame on Trump, saying that he "only gave the Ellipse Speech because the White House asked him to, in his capacity as a United States Congressman."

According to a Washington Post report, Ali Alexander, a far-right activist who helped organize the "Stop the Steal" rally, fingered Brooks as one of the three chief lawmakers that came up with the idea for the demonstration.

"We four schemed up of putting maximum pressure on Congress while they were voting," Alexander said in a since-deleted video. Brooks denied the allegation, with his staff even claiming that the Alabama lawmaker "has no recollection of ever communicating in any way with whoever Ali Alexander is."

In August, Brooks expressed sympathy with a man who threatened to bomb the library of Congress.

"Sadly, threats of violence targeting America's political institutions are far too common," Brooks said after the man's arrest. "Although this terrorist's motivation is not yet publicly known, and generally speaking, I understand citizenry anger directed at dictatorial Socialism and its threat to liberty, freedom and the very fabric of the very fabric of American society. The way to stop Socialism's march is for patriotic Americans to fight back in the 2022 and 2024 election."