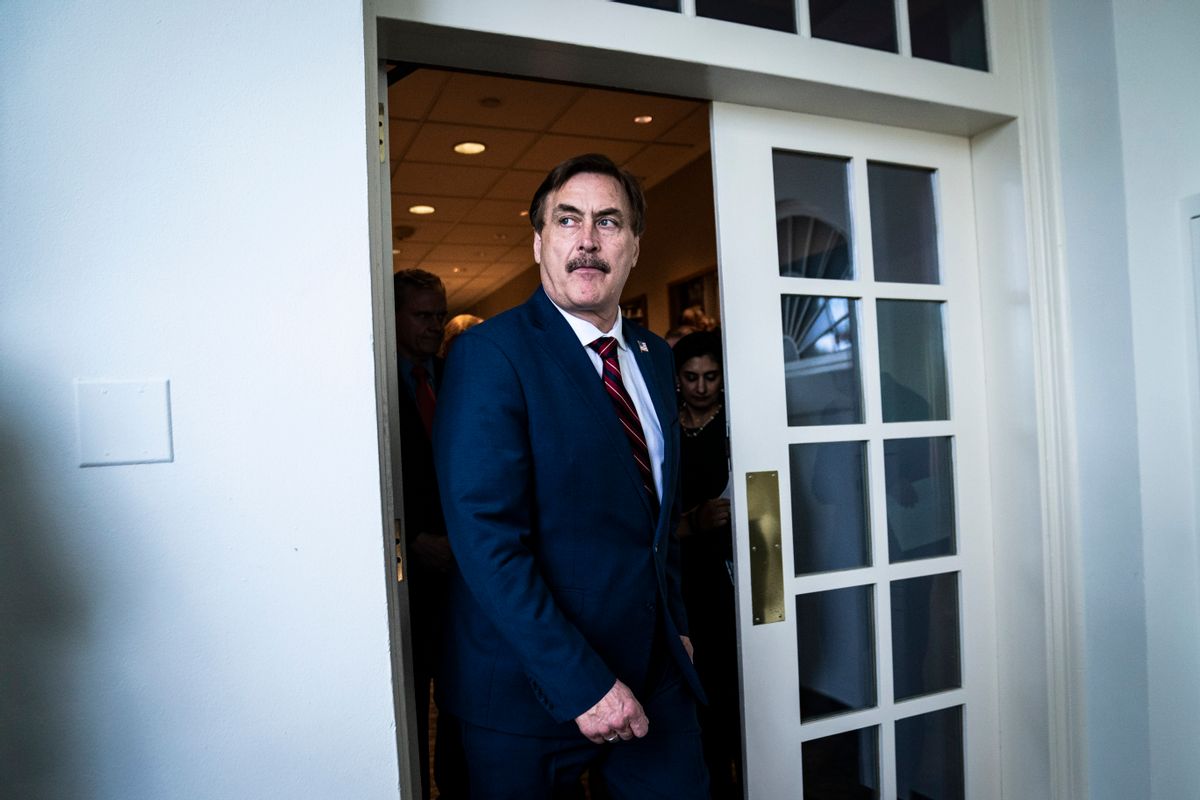 Pillow merchandiser turned 2020 election denier Mike Lindell neither endorsed nor rejected the prospect of a military coup if the Supreme Court refuses to accept his long-awaited case on purported election fraud, which he plans to make public just before Thanksgiving.

Lindell's still-hypothetical case, assembled by a team of pro-Trump lawyers, will apparently argue that the Chinese government or its agents rigged the outcome of the 2020 presidential election, perhaps through the now-infamous machines made by Dominion Voting Systems. Presumably he will ask the court to overturn or set aside the election results as certified by Congress, something it has no legal or constitutional power to do.

On Monday night, the pillow king opened up the phone lines during "The Lindell Report," which streams nightly on Frank: The Voice of Free Speech, a site plagued with continual technical glitches. One caller eagerly asked Lindell if he thought the military might stage a coup if the Supreme Court refused to accept his pre-Thanksgiving offering: "Any chance the military might take over if the Supreme Court doesn't come through?"

Lindell didn't take the bait but didn't exactly reject it either. "Well, I'm going to tell you right now that Supreme Court on ... we're dropping it on Nov. 23," he said, before pivoting to a familiar villain: "Our biggest battle is with the media."

RELATED: Mike Lindell moves the "reinstatement" goalposts again — now Trump will be back by Thanksgiving

The bedding tycoon warmed slightly to the possibility of military rule as he went on, observing that the United States was in "uncharted territory." He explained: "We have never had a country attack us without firing a shot. Take our whole country down. This fast!"

Finally Lindell admitted, "As far as the military, I have no clue," which seemed some distance short of ruling the idea out completely. Co-host Brannon Howse had prompted callers to ask Lindell questions he could then share with Donald Trump at their supposed upcoming meeting. Lindell speculated that he could ask the former president about a potential military takeover, but then appeared to backtrack. "I don't know if that could even be a question for him," Lindell said. "This is on God's timing!"

Lindell seems to have adjusted his expectations again, without quite saying so: He presumably understands that a case dropped on the Supreme Court on Nov. 23 will not result in Trump's "reinstatement" as president by Thanksgiving, which is two days later. Last week, even Steve Bannon — who has displayed fervent pro-Trump loyalty since receiving his presidential pardon — urged the pillow tycoon to "be realistic" about his goal of overturning the 2020 election by way of the high court.

RELATED: Steve Bannon has enough of Mike Lindell's election "fantasy," pleads with him to "be realistic"

Lindell told Bannon on the latter's "War Room: Pandemic" podcast that he hoped to get "a minimum of 20" state attorneys general to sign on to his still-invisible lawsuit. "I'd like to get all 50 attorneys generals [sic], because every one of them should be worried," he continued. That was when Bannon gently pleaded with Lindell to "be realistic" about the probable outcome of his crusade.

For the moment, Lindell's optimism seems unshaken, even as another self-imposed deadline approaches. He says he will once again give up sleep and host a three-day marathon online event ahead of the holiday to bring attention to his cause, running for 72 hours straight on the Frank site.

Neither Lindell nor his legal team responded to Salon's request for comment.

More from Salon's coverage of Mike Lindell's war on democracy (and/or tireless crusade for truth):