The concert left eight dead and hundreds injured, and Scott is ... touting a brand partnership? 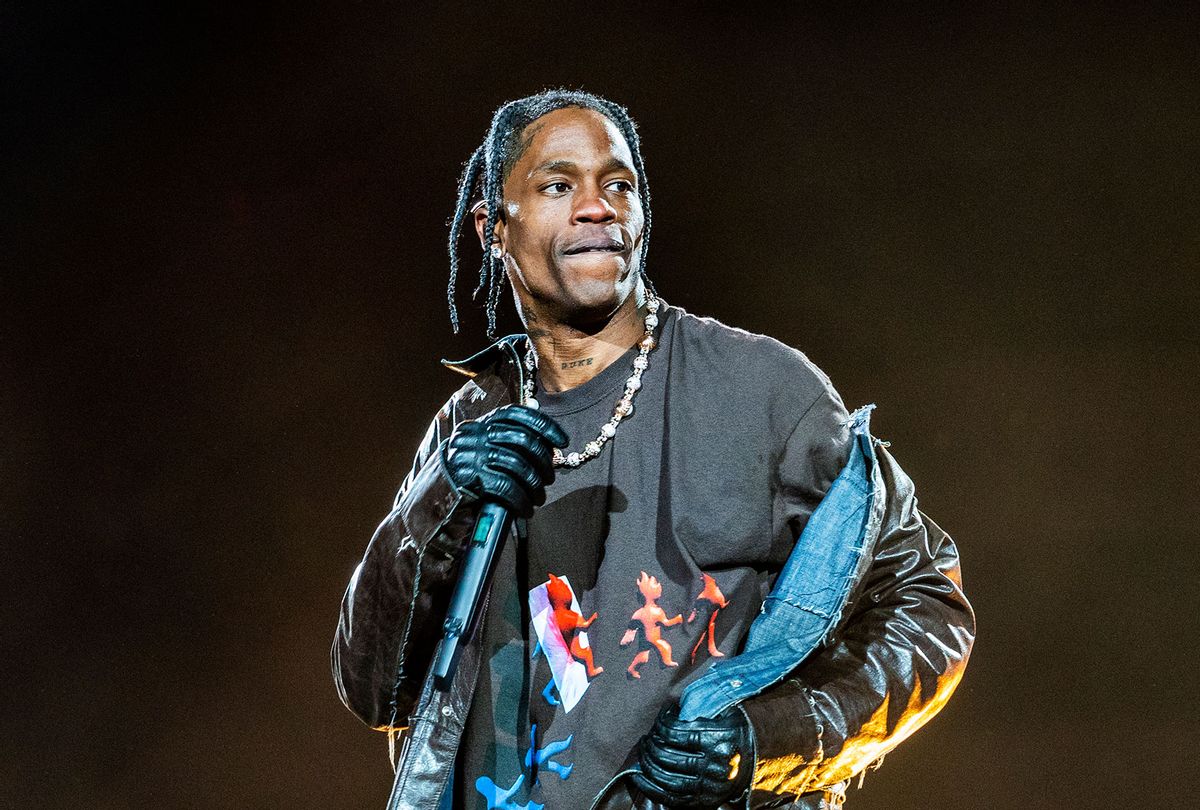 On Friday in Houston, rapper Travis Scott's concert during his annual Astroworld festival resulted in hundreds of injuries, dozens hospitalized, and eight dead, including a 14-year-old. Festival-goers were hurt when the crowd surged and stampeded, causing several attendees to be suffocated and trampled.

Scott, who's built his brand around "raging" and stoking crazy, even violent behaviors among his fans and concert attendees, has been widely criticized for the devastating mass casualty event, and not just because it happened at his festival. Nearly 40 minutes after Houston police identified his concert as a mass casualty event, Scott continued performing his set on stage, Houston Chronicle has reported. He played on even as ambulances tried to make their ways through the crowd and concert-goers screamed for him to stop. Videos show Scott appearing to witness people in the crowd in severe medical distress.

Now, in the aftermath of the deadly tragedy, Scott's crisis communications team is scrambling. Granted, there's virtually nothing that can be said or done to even come close to remedying a situation that involves eight dead, hundreds injured, and thousands traumatized. But Scott's sanitized, almost empty Saturday statement about being "devastated," and his black-and-white filtered, emotionless Instagram story video of himself notably not apologizing, don't come anywhere close.

RELATED: The booming business of music festivals has a problem only gun control can solve

Since the weekend, Scott has backed out of his scheduled performance at the Day N Vegas festival this coming weekend, pledged to cover the funeral costs of the victims, will refund all who bought Astroworld tickets, and as of Monday, has announced a "partnership" with the therapy app BetterHelp to provide one month of free online therapy to all Astroworld attendees. You'll forgive us for being a bit cynical about this.

Eight people are dead, and — obviously, to protect himself legally — Scott has yet to so much as apologize for the poor planning and conditions at his festival that led to these deaths, not to mention his refusal to stop performing and shut things down when it was clear what was happening. (As TikTok detectives have shown, Scott has previously stopped a concert when an audience member tried to steal his shoe, but couldn't be made to stop last week while audience members were dying.)

Now, Scott has rolled out what appears to be a brand partnership with a digital therapy app, and a relatively controversial one, at that. As Slate points out, unlike other therapy apps, BetterHelp doesn't accept insurance from customers. The presentation of this resource as a "partnership" between Scott and the app feels almost self-promotional, and particularly eyebrow-raising with — again — eight people dead. It's not even clear whether the free month of app-based therapy is coming directly out of Scott's pocket, nor is it clear what options will be left for those still in distress from surviving the near-death-experience of Astroworld Fest 2021 after that one-month free trial expires.

All of that said, it's easy to point out everything Scott is getting wrong — eight people died at one of his festivals. But in truth, it's hard to say what the "right" response from him would be; as upsetting as Scott's lack of apology is, an apology for his part in a mass casualty event would do little to nothing for those who are mourning deceased loved ones, or traumatized by the hellish sea of bodies they survived.

In other words, there's no form of apology, compensation, or (temporarily) free therapy program that can substitute for loss of life from fatally poor festival planning and conditions. As Houston police continue to investigate Astroworld, it's clear that the deaths could have been preventable, most notably with proper crowd control, or selling a more limited number of tickets instead of prioritizing profits over safety. Let's not forget that we're still in a pandemic, and it seems unlikely that every member of the 50,000-person crowd at Astroworld was fully vaccinated. Festival-goers have also alleged that some of the severely understaffed medics working the festival were shockingly inexperienced and unprepared, including some who couldn't even perform CPR and had to seek out CPR-trained audience members.

Scott can't travel back in time to change the devastating conditions that led to these deaths, by, say, implementing common-sense safety measures, or capping ticket sales, or, hey, maybe not performing when he saw an ambulance trying to move through the crowd. But he can speak out and demonstrate an understanding of what went wrong, and work to meaningfully change the conditions at nearly all major festivals that put lives in danger.

No compensation will ever be enough for the lives lost and the traumas Scott's festival has inflicted on his own fans. But in addition to doing everything he can to financially support the loved ones of those lost, and others who were harmed and victimized, he should be speaking clearly and specifically about what he'll do to ensure nothing like this ever happens again.

The Astroworld tragedy isn't the first concert that's become a mass casualty event. In 1979, a concert by British rock band The Who performed in Cincinnati, Ohio led to 11 dead following a rush of concert-goers outside the totally packed venue. The band faced a class action lawsuit, and wound up paying what would today be valued at $389,800 to the families of the deceased. And while Astroworld isn't the first music festival-turned-deadly-tragedy, it probably won't be the last either, if festival sales, understaffing, and other conditions continue as they are.

If Travis Scott wants to do something to begin to correct for the lives lost at his festival, he can't keep protecting himself by not accepting responsibility. He has to publicly recognize all that went wrong, his part in it, and prove that he's doing the work to ensure these conditions are never replicated at any festival again.