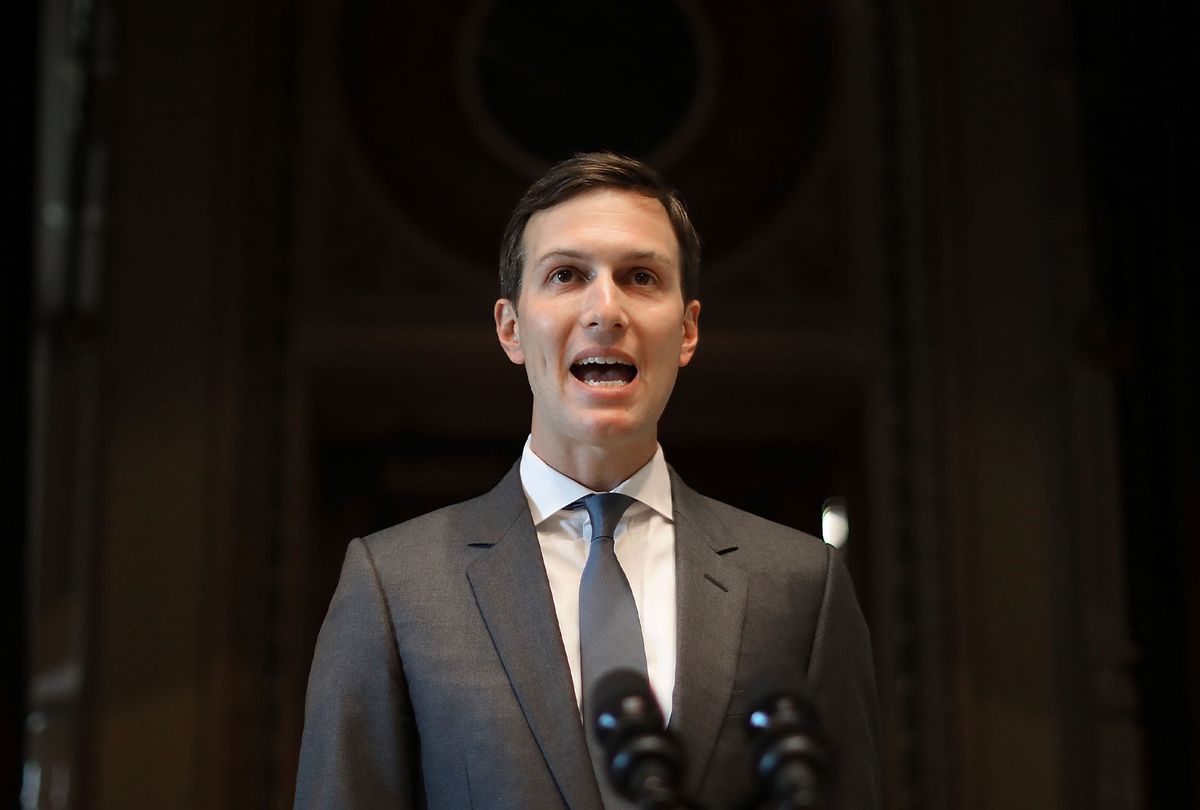 A federal agency that was led by a longtime friend of Jared Kushner, Donald Trump's son-in-law, received $100 million in Pentagon funds to help with the nation's COVID response — but has yet to spend any of the money, according to a government watchdog.

The Trump administration last year tapped the International Development Finance Corporation (DFC), an independent government agency that funds private development projects, to distribute $100 million in loans funded by the Pentagon through the CARES Act to "finance the domestic production of strategic resources needed to respond to the COVID-19 outbreak, and to strengthen any relevant domestic medical supply chains."

Dozens of companies sought those loans to help increase the country's supply of PPE, ventilators, vaccines and testing supplies after then-President Trump invoked the Defense Production Act under pressure from Congress. But to this day, DFC has not doled out a single dollar from the program despite receiving 178 applications, according to a new Government Accountability Office report, although the agency did spend more than $1 million just going through the applications. The agency has since put its application portal on ice and its authority to lend funds under the program will expire in March 2022.

DFC was created by Congress in 2018 to help fund private development projects overseas. Trump tapped Adam Boehler, who was Kushner's college roommate and later invested in his brother's health startup, as the agency's first CEO in 2019. Boehler, a former health care entrepreneur who had been appointed by Trump for a Health and Human Services position, was one of a group of Kushner friends — dubbed within the administration the "slim suit crowd" — who were tasked with rescuing Trump's floundering COVID response, albeit without much success. The agency hasn't had any success doling out the loans since President Biden took office either.

Despite starting the program in June 2020, DFC has struggled to figure out how to review loan applications and still "doesn't have a plan to evaluate the program's overall effectiveness," the GAO report said. DFC officials told the GAO that the process included "more applications and more complex interagency involvement" than the agency expected. The GAO recommended that DFC "develop a plan" to evaluate the effectiveness of the program and complete its methodologies for accounting for program costs. DFC officials "did not concur" with that recommendation, according to the report.

Chelsa Kenney, the author of the report, told NBC News that the failure to provide any loans had created an "expectations gap" in the agency's performance. She said the agency had "whittled" nearly 200 applications down to eight but has yet to distribute any funds.

"While we appreciate the work GAO has allocated to this audit, it inaccurately portrays DFC's particular role given the program includes management and close participation from multiple agencies across the government," spokesperson Pooja Jhunjhunwala told NBC. "DFC is neither the lead agency nor provides the loan disbursements to companies."

In its official response to the GAO report, DFC sought to cast blame on other government agencies.

"While this report is correct in conveying that the DFC CEO has authority over some key operational, administrative and program decision making functions, it must be noted that the most key programmatic authorities, including budget authority over transactions and administrative costs and approval on project eligibility and technical requirements, reside with the interagency partners for this program: DOD and HHS," acting CEO Dev Jagadesan wrote, according to the NBC report.

Jagadesan took over as the agency's acting head after it stirred controversy during Boehler's tenure. Boehler acted as a key liaison between Kushner and HHS Secretary Alex Azar in the early days of the pandemic, playing a major role in the administration's failed strategy to contain the spread of the virus. He was even on the White House shortlist as Azar's potential replacement after the secretary was forced to resign.

Boehler helped assemble an ad hoc task force, led by Kushner, which included other young entrepreneur types who drew "resentment" among senior officials who labeled the group a "frat party" that "descended from a UFO and invaded the federal government," The New York Times reported last year. The group "added another layer of confusion" to the administration's bungled response while "taking credit for changes already in progress and failing to deliver on promised improvements," officials complained last spring.

Boehler downplayed the need for the administration to invoke the Defense Production Act to help increase the supply of life-saving equipment last year. Trump ultimately relented under pressure from Congress and put Boehler in charge of distributing the government contracts.

Boehler's first announcement under the executive order last summer was a plan to loan Eastman Kodak $765 million to turn the longtime photography company into a pharmaceutical manufacturer. That was after a Kodak executive offered to help boost supplies of hydroxychloroquine, an anti-malarial drug touted by Trump as a COVID miracle cure but that many studies have found is ineffective and potentially harmful. The deal ultimately fell apart over the company's lack of experience in drug manufacturing. Though a government watchdog ultimately found no evidence of wrongdoing by DFC, New York Attorney General Letitia James has accused the company of insider trading after its CEO bought more than 46,000 shares of Kodak stock while negotiating the contract, and before the share price soared on the news of the deal.

DFC also awarded hundreds of millions in loans to a Connecticut company called ApiJect Systems, which promised to produce more than 100 million prefilled vaccine syringes by the end of 2020 and more than 500 million in 2021. But NBC News reported in the spring, after more than half of adults had already received a vaccine, that the company had not had not produced a single syringe and had not even built its promised plant to produce them. The company told NBC that it had not yet received approval from the FDA to use the syringes with COVID vaccines, and needs to raise nearly another $200 million to secure the $590 million loan it was awarded under the Defense Production Act. A spokesman for Pfizer told NBC that even if the company gets all of its necessary approvals, it "would not have any impact on our output or process."