Regretsy: "Exceedingly remorseful" you took part in that insurrection? There's an app for that

Were you "caught up in the moment" that time you stormed the U.S. Capitol? Forgiveness might be just clicks away! 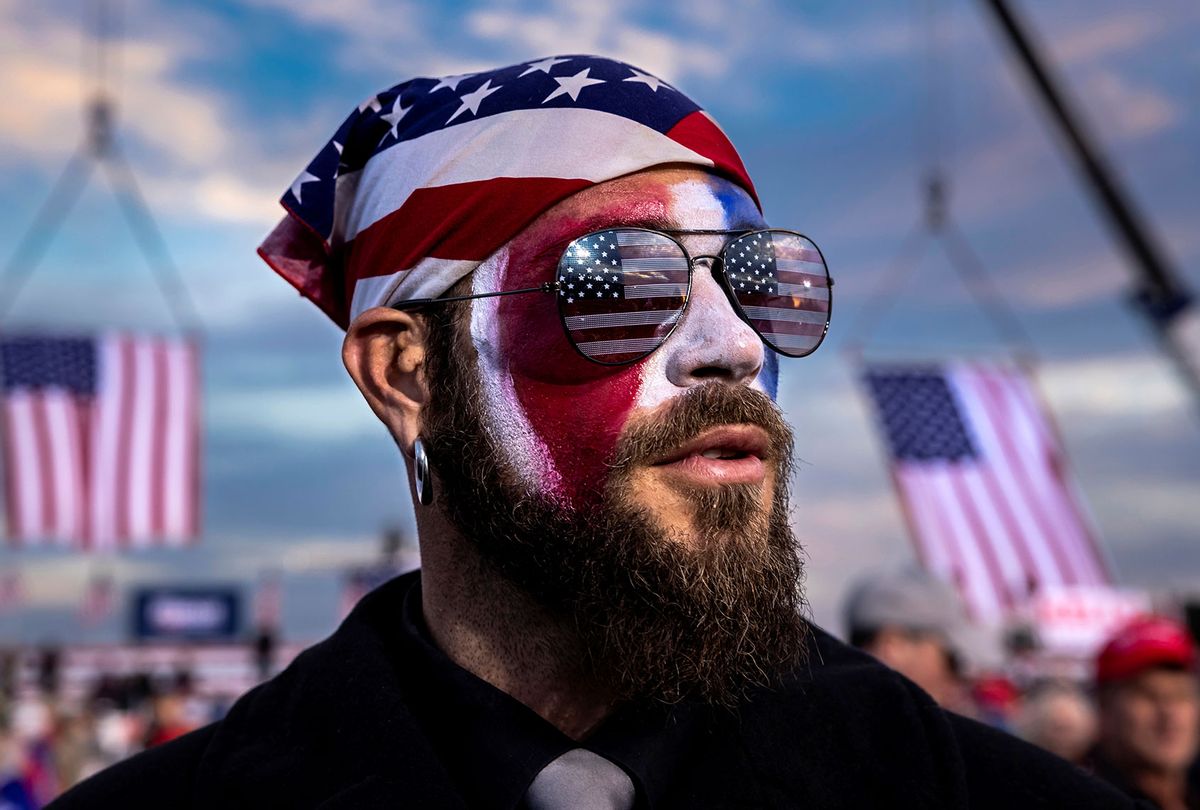 QAnon Shaman, Jacob Chansley at a Trump rally in Dalton, Georgia on the 4th of January. He attended the Capitol riots on the 6th of January in Washington, DC. (Brent Stirton/Getty Images)
--

Both defendants in separate hearings said … that they were "caught up in the moment" Jan. 6. That was part of their argument as they sought leniency. …The judge said that one of the reasons (the defendant) was getting the sentencing of 45 days was that he seemed "exceedingly remorseful."

Were you caught up in the moment of attempting to overthrow a democracy? Do you now feel, with cause, that you made a really bad choice? Are family members, friends and bosses still justifiably angry? You are not alone. If you wish people would forget about when you scaled the walls of the United States Capitol, that's a tough ask. But if you could rappel back to Earth for a minute and apologize? They might forgive you. Bring a gift. Or three.

Luckily, there's an app for that. Regretsy provides a marketplace of apology wares for those you've alienated by attempting a coup. From artwork to technology, it's never been easier to say "I'm exceedingly remorseful."

Send a funeral-sized bouquet with silk sash proclaiming, "I'm sorry I told you to f**k your feelings." Carnations, assorted colors, with fresh greenery. $79.99

Turn your pre-sentencing motion into a 100% organic cotton tapestry. Highlight your comparatively minor charges by showcasing what you did not do on Jan. 6. Sample: "He did not enter any offices; did not enter the House or Senate floor; he did not take any 'souvenirs;' did not contemplate defecating on anyone's desk; did not yell, 'We have the police surrounded!'; did not carry a pickaxe; did not yell, 'Traitors gonna hang!'; did not yell, 'Go, go, go!' when police lines were breached. He also was not affiliated with any organized or extremist group. He did mill about the Capitol building taking pictures and left when told to do so." $59.99 — available in jute, moss, and rose

RELATED: Nothing sacred: From Jefferson to Jan. 6, America's toxic mythologies are destroying us

Cross-stitch makes an artful present, and you can craft while contemplating your actions. Our RemorseFull Heart kits come in a variety of patterns and sayings. Top sellers: The Capitol dome/I'm sorry I broke in, milled about and took pictures; Hearts and flowers/Feel Your Feelings; and Uncle Sam/When you point a finger, three point back at you. $11.99 each — thread, cloth, needle and hoop included

Fashion your apology with patches, silk-screened T-shirts, trucker caps and more. Keep it simple with premade looks: "I Regret My Actions 1/06/21" and "#ExceedinglyRemorsefulInsurrectionist." Or make a statement with a personal design: "Not Proud I Pooped in a Potted Plant in the U.S. Capitol." $29.99

Video apologies from celebrities provide solace, as they can be rewatched by your spouse and kids when you're in government custody. Select from a variety of former Trump administration spokespersons-for-hire to record your apology. If you pay it, they will say it. Even the words "I was wrong. I'm sorry," which they will attempt with sincerity. Listen, it is what it is. A thing you can buy. Starting at $99.99

Help fund development of Regretsy's new partner app, Forgetsy, with exclusive time-machine access to Jan. 5, 2021. Our physicists are close to completing the portal! Have you ever wanted a do-over — to go back to being an everyday hater who was not attempting to destroy the democratic republic of the United States of America? Who was not threatening the lives and well-being of elected officials? Who was not participating in a deadly riot where a Capitol police officer was killed? Followed by four more officers who died by suicide after experiencing trauma?

Channel your excessive remorse for good. Sign the waiver. Wire the money. Purchase the mandatory Flesh Compression Suit for time travel. And when you return to Jan. 5, wondering what you're doing in a hotel room so far from your home, remember: Here's your chance to change the outcome. Not the outcome of a free and fair election, but of your own actions.

More on the activities of Jan. 6 some participants may have regretted:

Sarah Layden's work has appeared in Newsweek, the Washington Post, McSweeney's Internet Tendency, Salon and elsewhere. She is the author of a novel, "Trip Through Your Wires," and a flash fiction chapbook, "The Story I Tell Myself About Myself," winner of the Sonder Press Chapbook Competition. She is an assistant professor of creative writing at Indiana University-Purdue University Indianapolis.