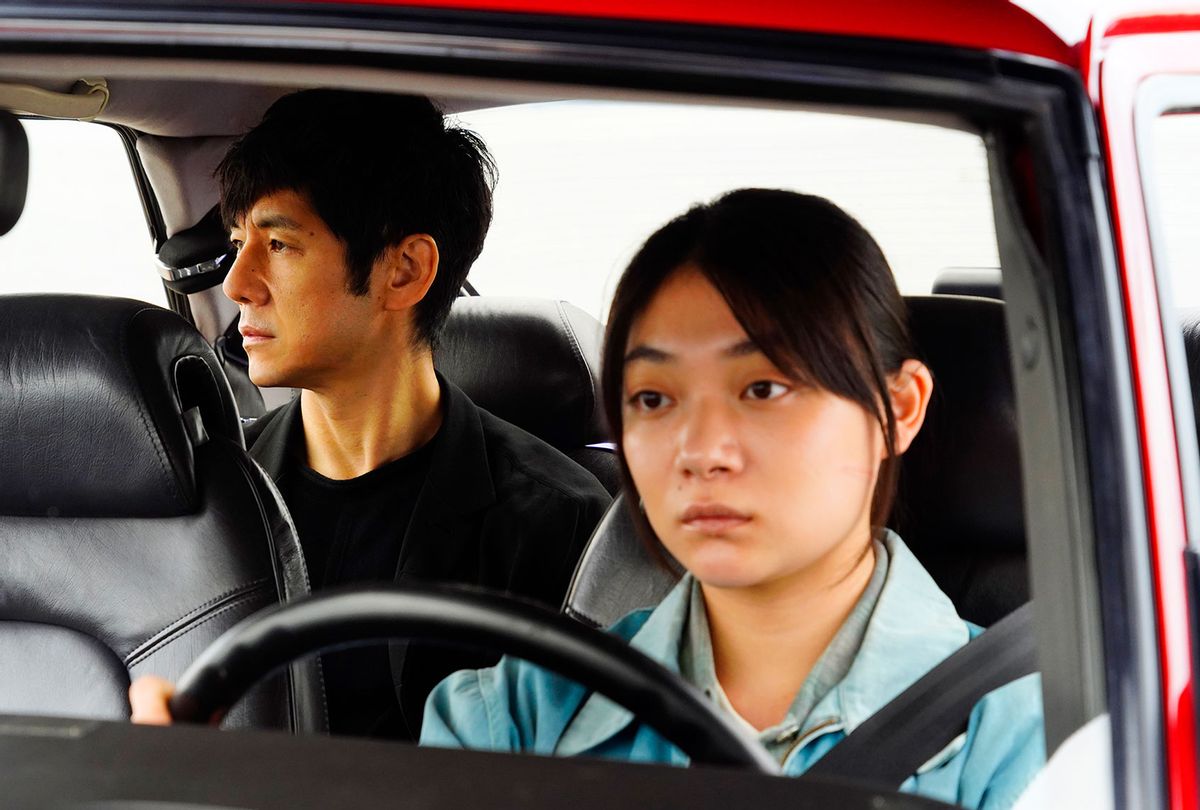 Directed and cowritten by Ryûsuke Hamaguchi, the exquisite, moving drama, "Drive My Car" is an adaptation of Haruki Murakami's eponymous short story from his collection, "Men Without Women."

Yûsuke Kafuku (Hidetoshi Nishijima) is a theatre director and actor whose wife Oto (Reika Kirishima) works in television. Their lives and relationship are shown in scenes that include a car accident that befalls Yûsuke, to the couple grieving over their child who died years ago, to Oto's affair with Kôji Takatsuki (Masaki Okada), a young actor. However, after an unexpected event, Yûsuke finds himself alone.

Cut to two years later when Yûsuke is doing a theatre residency in Hiroshima. Yûsuke is assigned a young driver, Misaki (Tôko Miura), whom he resists at first, but eventually befriends. And one of the actors in the production of "Uncle Vanya" is, surprisingly, Kôji Takatsuki.

Hamaguchi slowly builds the drama over three leisurely but compelling hours. The long scenes between Yûsuke and Misaki in the car (a cherry red Saab with a moonroof; not the yellow Saab 900 convertible from Murakami's story) are especially lovely and engrossing as these strangers come to know each other through discussions of their lives and experiences.

In addition, there are many narrative threads that emphasize the power of storytelling, from an idea Oto is creating for television, to multiple productions of "Uncle Vanya," to Misaki's tales about her late mother. As the main characters interact, they discuss fate and guilt, as well as pain and trauma, eventually finding a common humanity. They come to the realization that the best way to learn about yourself is through others.

Hamaguchi spoke with Salon, with the assistance of translator Stacy Smith, about his new film, fate, and his most memorable car trip.

What was it about Murakami's story that resonated with you that you adapted this story?

The biggest reason for me was that a lot of these conversations took place in the car. The main characters have no connection to each other; their relationship is one of driver and passenger, which, on its own, is not a deep relationship. But through them revealing themselves to each other, they end up revealing their deepest selves. I thought this process was interesting and that this took place in the space of a car, a staging ground, where they are just relying on their voices to share things. In a way, it almost makes it easier to reveal parts of yourself in that set up. This is very close to how I think people relate to one another.

At the heart of the film is the idea that the best way to know yourself is through others. Can you talk about that idea?

That line comes from Murakami's story — needing to know others to really know yourself deeply and honestly. I changed many portions from the original, but this is one of the few portions I left unchanged. In terms of knowing yourself and your emotions, this is something you really have to get from your interactions with others. I agree with that. To know yourself, you can only measure that via your reactions to others. Meaning, when someone asks you a question, via your answers, it enables you to see yourself, how you think, and to confirm what kind of person you are.

Yûsuke has a very deliberate approach to the plays he directs. How did you approach storytelling and directing — especially when you have multiple narratives crisscrossing over three hours?

Honestly, my basic stance is focusing on the characters' emotions, and how changes take place over the course of the film. It's also about the relationship among the characters, so I try to find the easiest way for viewers to receive those emotions and feelings. That's really how I approach my storytelling. I am making the story easy to understand by consolidating what I am showing to viewers. I am focusing on the pasts of my characters, and their emotions — what's inside them. This might not always be directly expressed in the film itself, but it is something the actors can convey to the viewers, through my text. It might give hints to the motivation for a character's behavior — even if it is not explicit. I'm not saying my text is supreme or always correct, but it is a vehicle that the performers can use to activate their imagination via the words and in that way convey to the audience the characters and their motivation.

I like that we hear Oto's (disembodied) voice in the car, reading lines from "Uncle Vanya" and the actress in the play uses sign language to communicate. What are your thoughts about the use of sound and voice, silence and talking?

Sound is important for conveying information that is taking place off screen, outside the frame. When you hear a certain sound, you can tell what environment a character is in, and it is also, probably, giving you a sense of the character's behavior as well. Voice is something that is coming across, but it is not a physical thing. But a lot of emotional information is being conveyed from the voice, and that is very honest. It is coming from the actor, who is acting as a character, but the voice is theirs. For them to convey the emotional state of the character, they are not actually becoming the character, but they are coming as close as they can by using their voice as a tool.

There is a line in the film that comes from "Uncle Vanya" that truth isn't frightening, but not knowing it is. Can you talk about this theme of truth in "Drive My Car"?

When we talk about truth, this is something that in actual life, we can live — or we do live — without actually knowing what is true, and what isn't. It's really an issue of what we believe or what we perceive the truth to be. And very often, there are cases where we can't — or don't want to know — what the truth is. In many cases, we are actually believing what is convenient, or best, for one's self. Maybe something that you don't want to notice or don't notice, is something where you have your own version of the truth. But the actual truth is something different, and in many cases, we don't want to recognize this; it involves a recalibration if you actually recognize what this truth is. And depending on where you are in life, this timing is different. I think "Drive My Car" is a story that really addresses this.

The film addresses issues of loss, guilt, and memory. How did you develop these themes in your work?

This came from a short story collection, "Men Without Women." It was "Drive My Car," as well as two other stories, "Kino" and "Scheherazade." They all share this theme of absence, especially in regard to women. Something that was there is no longer there. They had this experience, and now it is a different experience. They keep thinking about the way things had been, and now that that person is not there; it is as if the world is not as it should be. This is a theme found in these stories. This relates back to what we were talking about with truth and having to re-believe or recalibrate what you believe. Once you have this kind of absence, you can't overturn it, it can't be revoked. This absence is still going to be there. What a person has to do is almost remake their own life in light of this absence. This is the process that takes place.

There are also ideas of fate expressed in the film. Do you believe in fate?

What can you say about a car trip you have taken that has had importance in your life?

I have a very clear memory of an influential experience in a car. This is going back a decade, to when Japan got hit with the big earthquake and tsunami. I made my way to this Northern part of Japan to make a documentary film. I was interviewing survivors of the disaster. I was there with a codirector, and we would drive up and down the coast together during our time there. I really felt a lot of words were born in the car. Through my experience of driving with him, this is something I felt deeply. As you are driving, you have a lot of scenery, so you have visual stimulation and there is auditory stimulation — the different sounds, the engine, and other things. And from this, a lot of words are born, at least a conversation. We mentioned this earlier in regard to voice. I think a lot of information is contained within one's voice when you are having these conversations. As a result, you are able to build and deepen your relationship. That was my experience during this time, and this is really reflected in "Drive My Car," and why I have such an affinity for this work.

"Drive My Car" releases in select theaters on Wednesday, Nov. 24 and will expand on Dec. 3. Watch a trailer for it below, via YouTube.