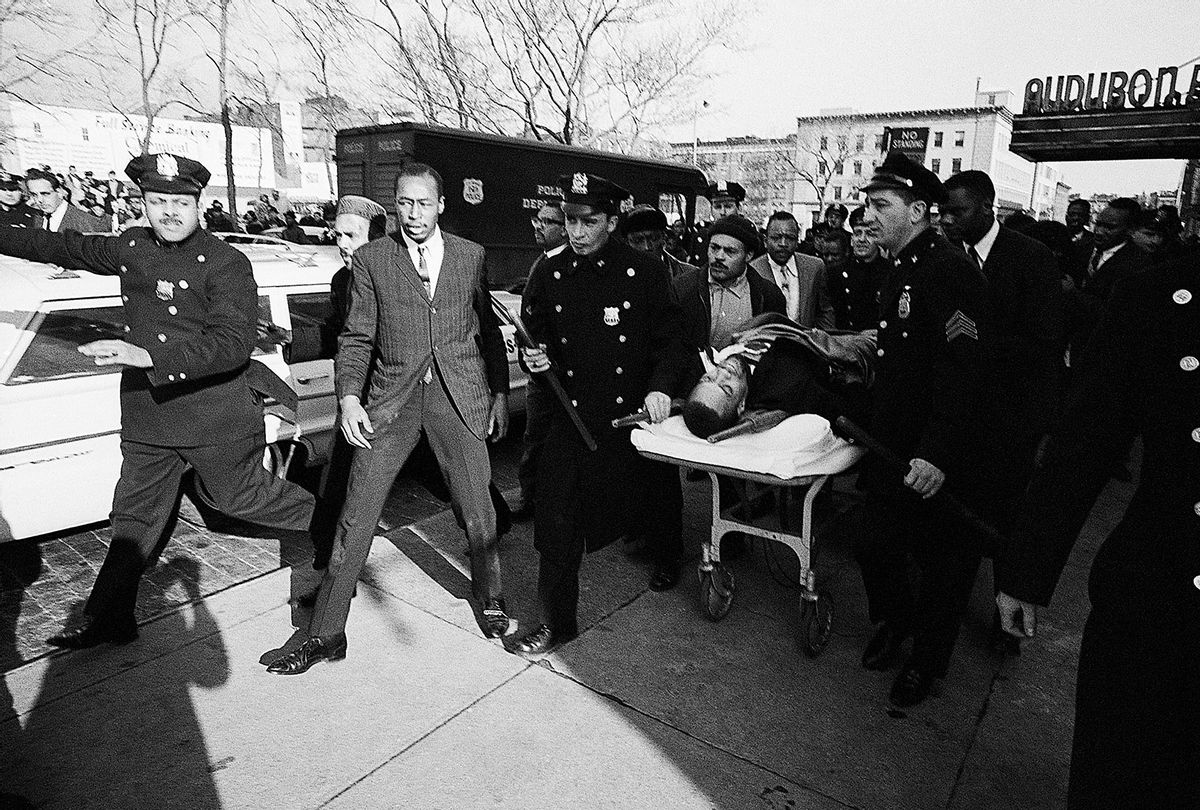 Two policemen carry stretcher bearing Negro nationalist leader Malcolm X after he was downed by an assassin's bullets at a rally on February 21st. The 39-year-old Malcolm was pronounced dead at the hospital when he was taken for treatment. The assassination of the one-time Muslim official came one week after the bombing of his home on February 13th. (Getty Images / Bettmann / Contributor)
--

Just a few days before the City of New York removed the oversized statue of Thomas Jefferson from the City Council chamber, Manhattan District Attorney Cyrus Vance asked a state court judge to vacate the convictions of two men who were wrongfully convicted for the murder of civil rights visionary Malcolm X in 1965 at the Audubon Ballroom in Harlem.

While moving the statue may seem heavy lifting, it's nothing compared to the inner fortitude required to revisit the ongoing race-based injustices that victimize people of color, who are living now and continue to feel the lash of punitive, racist and often corrupt law enforcement.

Exonerations of wrongfully convicted Black men now come with such frequency that they show up at the end of the newscast, just before the weather and the stock quotes. There can be no greater validation of "critical race theory" than regularly tracking these cases in all their gory detail.

Vance, who is in his final days in his office, told the court that Muhammad Abdul Aziz (who is still living, at age 83) and Khalil Islam (who died in 2009), had been the victims of "unacceptable violations of the law and the public trust" on a massive scale that easily crossed over the line into something far more sinister than your run-of-the-mill racial profiling.

"But what we have obtained now in this reinvestigation, are numerous materials that my office tragically did not have in 1965 and thus did not turn over to the defense," Vance told the court. "Most critically, we have obtained dozens and dozens of reports, from the FBI and the NYPD's Bureau of Special Services and Investigations. … And, significantly, we now have reports revealing that, on orders from Director J. Edgar Hoover himself, the FBI ordered multiple witnesses not to tell police or prosecutors that they were, in fact, FBI informants."

RELATED: Moderate Democrats are celebrating MLK. He was disgusted by them

Vance continued: "Many of those documents were exculpatory. None of them were disclosed to the defense. Without these files, it is clear these men did not receive a fair trial, and their convictions must be vacated. Moreover, under the unique circumstances presented by a 55-year-old case, there can be no retrial on any of the charges contained in the indictment. Therefore, the People believe the indictment against Mr. Aziz and Mr. Islam should be dismissed."

Both men had maintained their innocence throughout their trial and incarceration. They ended up serving 20 years in prison and were paroled in the 1980s.

Vance went on to apologize to Aziz and his family, to the family of Islam and to the family of Malcolm X "on behalf of our nation's law enforcement for this decades-long injustice, which has eroded public faith in institutions that are designed to guarantee the equal protection of the law. We can't restore what was taken from these men and their families, but by correcting the record, perhaps we can begin to restore that faith."

There was no physical evidence to connect Aziz and Islam to the murder scene, and both insisted they were home at the time of the murder, which occurred in broad daylight, beginning with a shotgun blast from one shooter and then additional rounds from two other perpetrators with handguns.

By contrast, there was considerable physical evidence to implicate Mujahid Abdul Halim (known at the time as Talmadge Hayer), the third man originally convicted along with Aziz and Islam. Halim, who was shot in the leg by a member of Malcom X's security detail, was apprehended by the crowd outside the Audubon Ballroom.

Halim originally denied at trial that he was involved in Malcolm X's murder, but had a change of heart after speaking to Aziz and Islam while they were in lockup together. He testified that he was one of the shooters, but that Aziz and Islam had nothing to do with the murder, saying that three or four other men had been involved in the shooting and that he knew who they were, but refusing to identify them.

Thanks to a Greek chorus of a dozen eyewitnesses — some or all of them FBI informants — who testified they saw Aziz and Islam on the scene, they were convicted. What we have here is an obvious frame-up that implicates the NYPD and the FBI.

Consider the role of one of the of the enthusiastic "eyewitnesses" who, according to Vance's motion, picked up the .45 caliber semiautomatic pistol used by Halim after he dropped it, "brought it back to his home in Brooklyn, and disassembled it" and then, hours later, "contacted the New York Office of the FBI and arranged to give them the gun. The FBI turned over the gun to the NYPD."

The New York Times reports that Vance's review was undertaken after "an explosive documentary" on Netflix about the assassination "and a new biography renewed interest in the case, [but] did not identify who prosecutors now believe really killed Malcolm X. Those who were previously implicated but never arrested are dead."

The Times article continues: "Nor did it uncover a police or government conspiracy to murder him. It also left unanswered questions about how and why the police and the federal government failed to prevent the assassination by at least one member of a New Jersey chapter of the Nation of Islam."

What's missing from both Vance's filings and the subsequent news coverage is any effort to put these latest developments into the historical context of COINTELPRO, the evil brainchild of J. Edgar Hoover that was aimed at discrediting and neutralizing important civil rights activists and change agents, including Malcolm X, Martin Luther King Jr., leading figures in the Black Panthers and so many others.

Earlier this year, the family of Malcolm X and attorney Ben Crump released a letter written by a former New York police officer, which they claimed showed that "the NYPD and the FBI were behind the 1965 assassination of the famed Black leader," according to the Washington Post.

"The 2011 letter by the now-dead officer, Raymond A. Wood, stated that Wood had been compelled by his supervisors at the New York Police Department to coax two members of Malcolm X's security team into committing crimes, leading to their arrests just a few days before the assassination," reported the newspaper. "They were then unable to secure the entry to New York's Audubon Ballroom, where Malcolm X had been speaking when he was killed."

According to the FBI's account on the agency's own website, COINTELPRO, "short for Counterintelligence Program," was launched in 1956 "to disrupt the activities of the Communist Party of the United States" and was expanded in the 1960s to "include a number of other domestic groups, such as the Ku Klux Klan, the Socialist Workers Party, and the Black Panther Party."

All this ended, the Bureau assures us, in 1971. The FBI's rather anodyne description goes on to say it was "limited in scope (about two-tenths of one percent of the FBI's workload over a 15-year period)," and "was later rightfully criticized by Congress and the American people for abridging first amendment rights and for other reasons."

That is a partial accounting, at best. Context and timeline are immensely important here.

Consider that in the summer of 1964, when Fannie Lou Hamer and the Mississippi Freedom Democratic Party came to the Democratic National Convention in Atlantic City to protest the seating of the white supremacists who controlled the state party apparatus, President Lyndon Johnson directed Hoover to conduct covert surveillance of Hamer and her fellow activists.

Hamer's televised first-hand account before the Credentials Committee at that convention, describing how local and state police in Mississippi had beat her savagely for trying to register to vote, riveted the nation.

Hamer was born in 1917 and was one of 20 children in a family of Mississippi sharecroppers who worked corn and cotton. At age 44, with just a grade-school education, she started attending meetings of the Student Nonviolent Coordinating Committee, which was organizing voter registration drives.

The FBI was already conducting illegal wiretaps on Dr. King. After Atlantic City, Hamer was a featured speaker at engagements with Malcolm X in the months that followed. What likely caught Hoover's attention was the fact that Hamer and Malcolm X's joint appearances represented a powerful convergence of forces within Black activism.

In an interview on my program on WBAI, New York civil rights and criminal defense attorney Ron Kuby recalled that his former mentor and friend Bill Kunstler attempted in the 1970s to "do exactly the same thing" that Vance did, relying on an affidavit from the confessed killer of Malcolm X.

"That motion went to court and was vigorously opposed by District Attorney Robert Morgenthau," Kuby recalled. Ultimately Judge Harold Rothwax, whom Kuby described as one of the worst on the New York bench, "denied the motion and these men stayed in prison for another decade or so, until they were paroled."

Kuby agreed it was a good thing that justice had finally been done in this case — but had more to say. "I have to say, this business of exonerating dead innocent Black people is a good thing," he said, "but a little more time should be spent a) exonerating living innocent Black people who are behind bars and b) trying to prevent more people from going to jail for crimes they either didn't commit or they were so over-criminalized there's no explanation for their incarceration except structural racism."

Statues are indeed easier to lift. This lost history behind the Malcolm X killing is much heavier.

More on history, racial justice and the surveillance state: