After a U.S.-sponsored coup in 2009 and a likely stolen election in 2017, observers urge continued vigilance 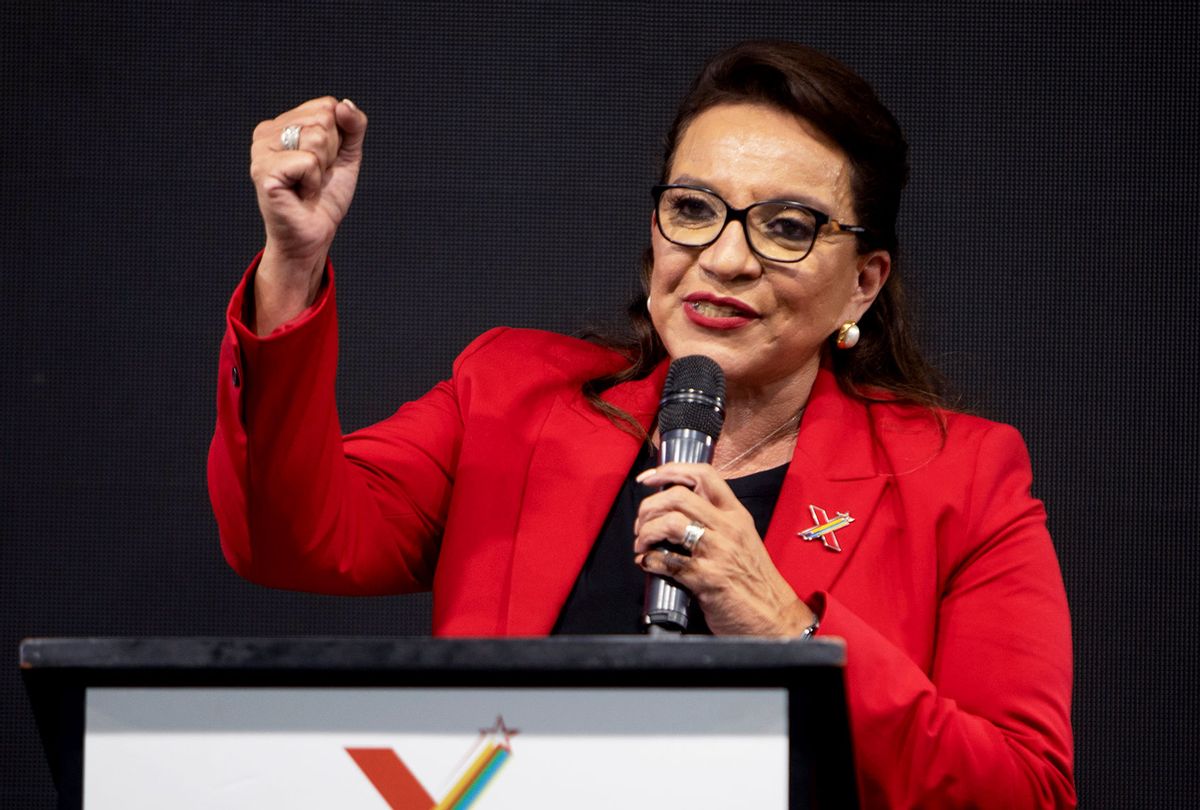 Xiomara Castro, Presidential Candidate of the Libertad y Refundacion (Libre) Party, speaks at a press conference on November 28, 2021 in Tegucigalpa, Honduras. According to the National Electoral Council, Castro received 53,44% of the votes and the candidate of the ruling National Party, Nasry Asfura received 33.8% with over 16% of the votes counted. (Inti Ocon/Getty Images)
--

Leftist presidential candidate Xiomara Castro took a decisive lead in Honduras' election on Sunday, setting her up to defeat the right-wing incumbent party's candidate — though progressive observers stressed the need to remain vigilant as ballots continue to be counted and reactionary forces ramp up misinformation following an apparently unsuccessful attempt to suppress voting.

A victory by Castro would represent a repudiation of U.S. intervention in Central America. Honduras' potential next president is the wife of Manuel Zelaya, the country's former progressive president who was deposed in a Washington-backed coup in 2009 — after which narco-violence surged under the watch of an authoritarian neoliberal regime installed by the Obama administration and supported by subsequent administrations.

If she wins, Castro would be the first Honduran president to be democratically elected on a socialist platform, as well as the first woman to lead the country. With just over half of ballots processed, the Libre Party's Castro had garnered 53.6% of the vote, compared with 34% for Nasry Asfura, the candidate from the right-wing National Party, which has ruled the country for the past dozen years.

Castro "hopes to restore diplomatic relations with China, legalize abortion and same-sex marriage, and defend the interests of the poor and working class," according to Telesur.

Calling the 62-year-old democratic socialist's solid performance a "triumph for democracy over corruption and election irregularities," Mark Weisbrot, co-director of the Center for Economic and Policy Research, said in a statement that "Xiomara Castro's likely victory is a testament to the will of the Honduran people to have their voices heard and their votes counted."

"Democracy remains very fragile in Honduras," Weisbrot warned. "This is a country that saw the military kidnap the president at gunpoint and fly him out of the country just 12 years ago, and there was very strong evidence that the elections of four years ago were stolen" by the ruling National Party.

Progressive International (PI), whose new observatory to protect democracy sent delegates to Honduras to monitor the electoral process, drew attention to reports that the ruling National Party was attempting to buy votes.

On Sunday morning, Salvador Nasralla — a former presidential candidate who led Honduras' 2017 election by five percentage points with 57% of votes counted before a 30-hour delay and other "technical failures" ultimately resulted in a National Party victory — said that the website of the National Electoral Council (CNE) had been "intentionally taken down" and that right-wing officials were giving voters inaccurate information about polling places.

Hours later, CNE announced that its server had been attacked, which PI said "has prevented voters from locating their polling station," causing long lines to form.

With polls still open and before a single ballot had been counted, the incumbent right-wing government said on Sunday afternoon that Asfura had won — in violation, Telesur reported, of "national electoral law prohibiting the premature claiming of victory before the competent authorities release their preliminary results ... which the CNE did just after 8:00 pm local time."

Journalist Denis Rogatyuk warned that "the party that turned Honduras into a narco-state will be unlikely to relinquish power peacefully."

The ruling National Party's alleged vote-buying and premature victory claims, along with the yet-to-be-resolved attacks on the CNE's website, weren't enough to deter hundreds of thousands of Honduran voters from casting ballots for the opposition Libre Party. Turnout was over 60%.

"Hondurans flocked to the polls in near-record numbers to decide the successor of the deeply unpopular current president, Juan Orlando Hernández," the New York Times reported. "Hernández's presence was palpable at the polls after his government spent the past eight years dismantling the country's democratic institutions and allowing corruption and organized crime to permeate the highest levels of power."

As the election progressed, Castro also declared victory. Once the preliminary tally showed Asfura falling behind by a significant margin, she told "jubilant supporters at her campaign headquarters on Sunday night that she would begin forming a government of national reconciliation starting on Monday," the Times reported.

"We have turned back authoritarianism," Castro told the crowd in the capital city of Tegucigalpa. "Out with corruption, out with drug trafficking, out with organized crime."

Although Castro has taken a commanding lead, it could take days for results to be finalized. In the meantime, electoral observers have emphasized the need to remain vigilant in the coming hours.

Earlier this morning, for instance, a Honduran newspaper shared a misleading graph that suggests Asfura is winning even as he trails Castro by roughly 20 percentage points. Jumping at the chance to use a pun, PI general coordinator David Adler described the chart as an example of "graphic violence."

While Castro's advantage is much larger than the opposition's early lead in 2017, making it more difficult for right-wing forces to subvert the election, The Guardian noted that a close outcome four years ago "led to a contested result and deadly protests after widespread allegations of irregularities."

According to Telesur, "Fears of the military and business elite repeating a similar scenario to the one from 2017 in which electoral fraud and manipulation stole the presidency from liberal candidate Salvador Nasralla (who has backed Castro) and gave it to the right-wing narco-dictator Juan Orlando Hernández have, until now, not materialized, with Hondurans proving ready to fight for the integrity of their democratic process in the streets and with their life, if necessary, as recent history has shown."

As Weisbrot noted, "The U.S. government supported the 2009 military coup in various ways, and so it will be good if members of Congress who favor democracy will make sure that the executive branch here respects democracy in Honduras more than they have in the past."

"On the positive side," said Weisbrot, "members of the Congressional Progressive Caucus have taken steps to hold the OAS accountable for its role in the 2019 military coup in Bolivia, so there are pro-democracy forces in Congress."

"The international community," he added, "should be on guard and ready to defend Honduras' democratic institutions, and the will of its people, against any extra-legal efforts to destabilize or overthrow the new government."

More from Salon on international relations and the comeback of socialism: