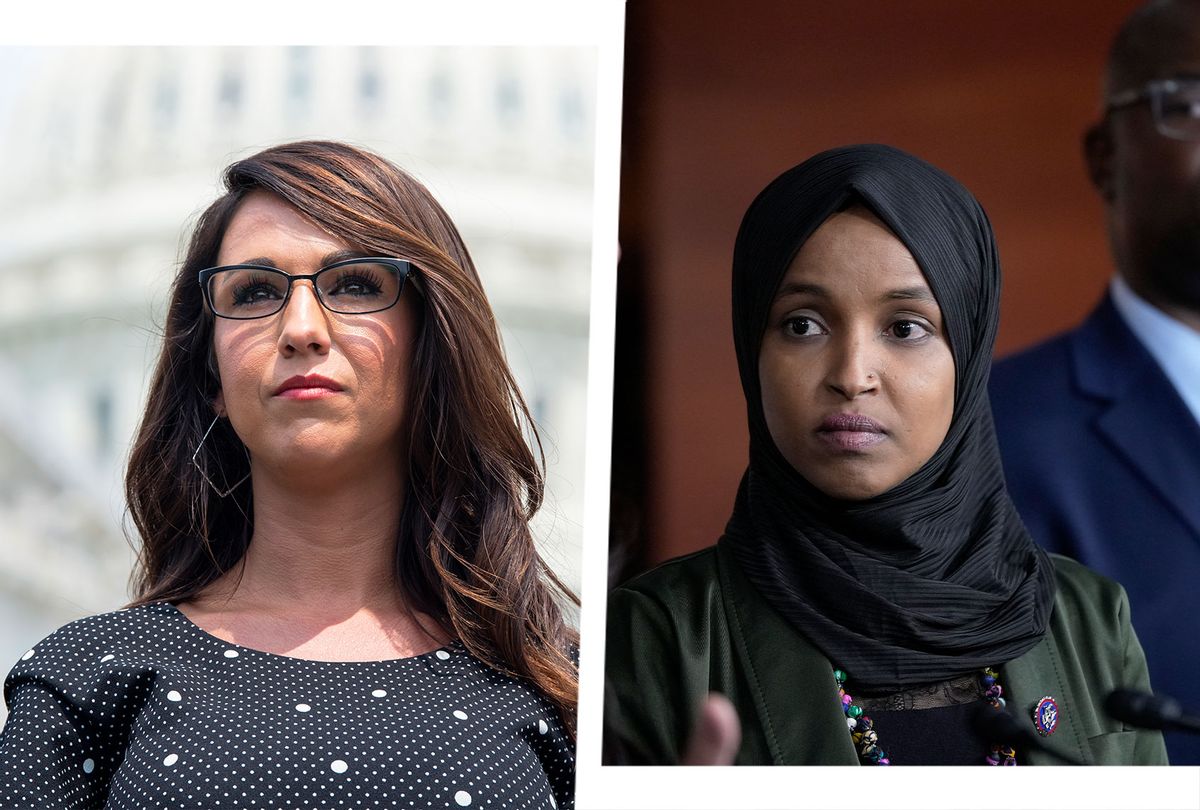 After a second video was released of Rep. Lauren Boebert, R-Colo., suggesting to a crowd that Rep. Ilhan Omar, D-Minn., was a "black-hearted" terrorist was unveiled on Tuesday, Democrats are now rallying to condemn the GOP.

The video, first reported by CNN, comes just a week after the conservative lawmaker made an anti-Muslim at joke at Omar's expense to a Colorado crowd during Thanksgiving break. In the September video – originally published that month – Boebert is seen making remarks at a Staten Island Conservative Party dinner referring to both Omar and Rep. Rashida Tlaib, D-Mich., as "black-hearted evil women." Later in the video, Boebert alleges that she had felt comfortable riding an elevator with Omar, a Muslim, because she wasn't wearing a backpack.

"One of my staffers, on his first day with me, got into an elevator in the Capitol, and in that elevator we were joined by Ilhan Omar," Boebert said in the video. "It was just us three in there and I looked over and I said, 'Well, looky there, it's the Jihad Squad.'"

"She doesn't have a backpack," Beobert continued, with audible laughter from the crowd. "She wasn't dropping it and running so we're good."

The video bears strong resemblance to another one published last week in which Beobert repeats a similar story – with minor tweaks – to a crowd in her home state. In the more recent iteration, Boebert describes making the same joke about Omar police officer in an elevator, ending with a similar punchline: "Well, she doesn't have a backpack, we should be fine."

In both instances, Boebert alleges that she told Omar that she is a member of the "Jihad Squad."

But Omar has called the entire account a "fabrication," tweeting this week that the ​​Colorado conservative "looks down when she sees me at the Capitol, this whole story is made up. Sad she thinks bigotry gets her clout." Omar said she has since received death threats.

"People truly don't understand the scale, intensity, & volume of threats targeting [Omar]," Ocasio-Cortez said in a tweet posted Wednesday morning. "Kevin McCarthy is so desperate to be speaker that he is working with his Ku Klux Klan caucus to look aside & allow violent targeting of woc members of Congress."

House Speaker Nancy Pelosi said to the House Democratic caucus Wednesday that "these people do not respect the House that they serve in. We have to make sure that the public understands that we do." According to ABC News, House leadership is considering a possible resolution condemning Islamophobia.

On Monday, Boebert revealed that she and Omar had set up a private call to tide things over. "I never want anything I say to offend someone's religion, so I told her that," Boebert alleged over Instagram, summarizing the details of the call.

But Omar has claimed that Boebert refused to apologize during the call. "Instead of apologizing for her Islamophobic comments and fabricated lies, Rep. Boebert refused to publicly acknowledge her hurtful and dangerous comments," the progressive said. "She instead doubled down on her rhetoric and I decided to end the unproductive call."

Multiple Democrats have meanwhile called on House Minority Leader Kevin McCarthy, R-Calif., to condemn Beobert's remarks, but the California conservative has repeatedly refrained from doing so.

"She has apologized for what she said and has reached out to Congresswoman Omar to meet next week," McCarthy said in a statement to CNN.