Does Israel want war? It's determined to sabotage a new nuclear deal with Iran

At least the U.S. and its allies are negotiating with Iran again — but Israel seems to be ramping up for war 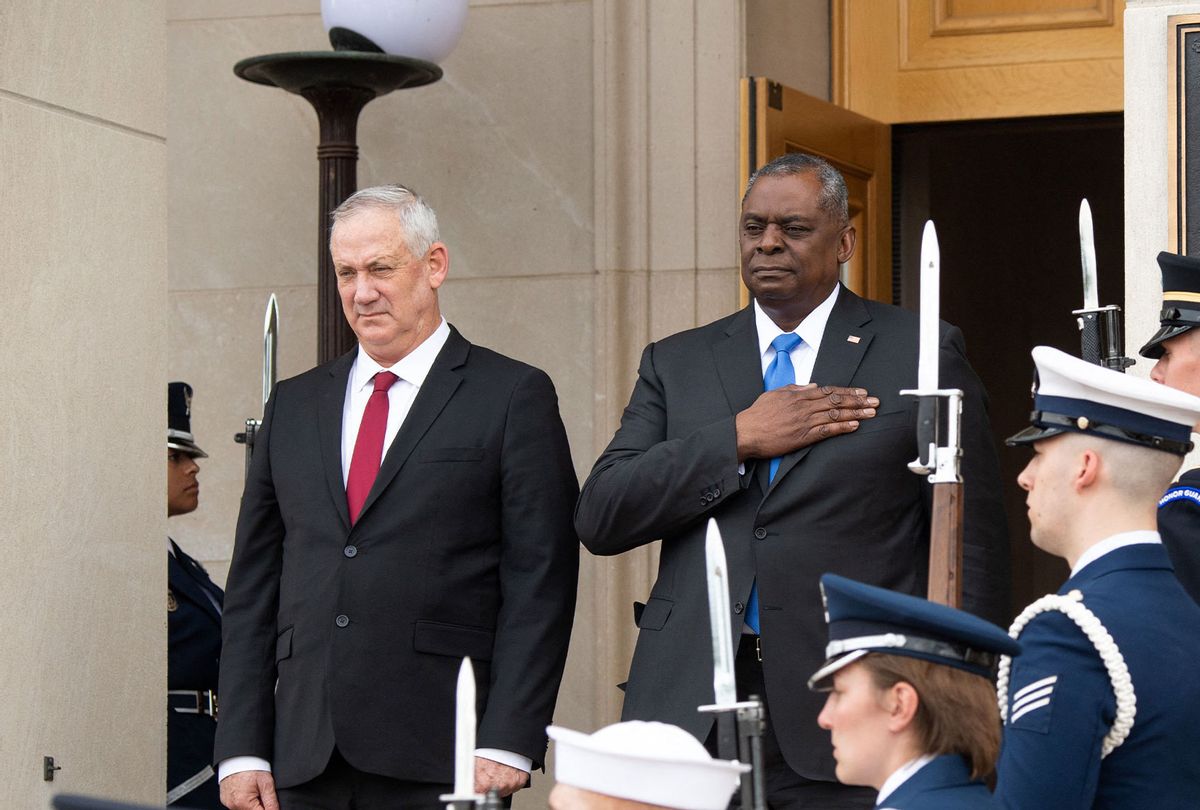 US Secretary of Defense Lloyd Austin (R) and Israeli Minister of Defense Benjamin "Benny" Gantz (L) stand for their countries national anthems prior to a meeting at the Pentagon in Washington, DC, June 3, 2021. (SAUL LOEB/AFP via Getty Images)
--

This article originally appeared at Jacobin. Used by permission.

After a five-month hiatus, indirect negotiations between the U.S. and Iran resumed recently in Vienna in an attempt to revise the 2015 Iran nuclear deal, formally known as the Joint Comprehensive Plan of Action, or JCPOA. The outlook isn't good.

Less than a week into negotiations, Britain, France and Germany accused Iran of "walking back almost all of the difficult compromises" achieved during the first round of negotiations before Iran's new president, Ebrahim Raisi, was sworn into office. While such actions by Iran certainly aren't helping the negotiations succeed, there is another country — one not even a party to the agreement that was ripped up in 2018 by Donald Trump — whose hardline position is creating obstacles to successful negotiations: Israel.

On Sunday, amid reports that the talks might collapse, Israeli Prime Minister Naftali Bennett called on the countries in Vienna to "take a strong line" against Iran. According to Channel 12 news in Israel, Israeli officials are urging the U.S. to take military action against Iran, either by striking Iran directly or by hitting an Iranian base in Yemen. Regardless of the outcome of the negotiations, Israel says it reserves the right to take military action against Iran.

In April 2021, as diplomatic efforts were underway between the Biden administration and Iran, sabotage attributed to Israel caused a blackout at the Natanz facility. Iran described the action as "nuclear terrorism."

In what has been ironically described as Iran's Build Back Better plan, after each Israeli sabotage actions the Iranians have quickly gotten their nuclear facilities back online, even installing newer equipment to more rapidly enrich uranium. As a result, U.S. officials recently warned their Israeli counterparts that the attacks on Iranian nuclear facilities are counterproductive. But Israel replied that it has no intention of letting up.

As the clock runs out to reseal the JCPOA, Israel is sending its top-level officials out to make its case. Israeli Foreign Minister Yair Lapid was in London and Paris not long ago, asking the British and French governments not to support the stated U.S. intention to return to the deal. Last week, Israeli Defense Minister Benny Gantz and Mossad chief David Barnea were in Washington for meetings with Defense Secretary Lloyd Austin, Secretary of State Antony Blinken and CIA officials. According to the Israeli Yedioth Ahronoth newspaper, Barnea brought "updated intelligence on Tehran's efforts" to become a nuclear power.

Along with verbal appeals, Israel is preparing militarily. Its government has reportedly allocated $1.5 billion for a potential strike against Iran. Throughout October and November, Israel conducted large-scale military exercises in preparation for strikes against Iran and this spring the Israeli military plans to hold one of its largest strike simulation drills ever, using dozens of aircraft, including Lockheed Martin's F-35 fighter jet.

The U.S. is also readying for the possibility of violence. A week prior to the negotiations resuming in Vienna, the top U.S. commander in the Middle East, Marine Gen. Kenneth McKenzie, announced that his forces were on standby for potential military actions should the negotiations collapse. Last week, it was reported that Gantz's meeting with Austin in Washington would include discussing possible joint U.S.-Israeli military drills simulating the destruction of Iran's nuclear facilities.

Stakes are high for the Vienna talks to succeed. The International Atomic Energy Agency (IAEA) confirmed this month that Iran is now enriching uranium up to 20% purity at its underground facility at Fordo, a site where the JCPOA forbids enrichment. According to the IAEA, since Trump pulled the U.S. out of the deal, Iran has furthered its uranium enrichment to 60% purity (compared with 3.67% under the deal), steadily moving closer to the 90% needed to build a nuclear weapon. In September, the Institute for Science and International Security reported that, under what it described as the "worst-case breakout estimate," within a month Iran could produce enough fissile material for a nuclear weapon.

The U.S. exit from the JCPOA has not only led to the nightmarish prospect of another Middle East country becoming a nuclear state (Israel reportedly has between 80 and 400 nuclear weapons, although their existence officially remains secret), but has already inflicted enormous damage on the Iranian people. The "maximum pressure" sanctions campaign — originally Trump's but now under the ownership of Joe Biden — has plagued Iranians with runaway inflation, skyrocketing food, rent, and medicine prices and a crippled health care sector. Even before the COVID-19 pandemic hit, U.S. sanctions were preventing Iran from importing necessary medicines to treat such illnesses as leukemia and epilepsy. In January 2021, the UN released a report stating that U.S. sanctions on Iran were contributing to an "inadequate and opaque" response to COVID-19. With more than 130,000 officially registered deaths so far, Iran has the highest number of recorded coronavirus deaths in the Middle East — and the real numbers, according to observers, are likely even higher.

If the U.S. and Iran are not able to reach an agreement, the worst-case scenario will be a new U.S. war in the Middle East. Reflecting on the abject failures and destruction wreaked by the Iraq and Afghanistan wars, a war with Iran would be catastrophic. One would think that Israel, which receives $3.8 billion annually from the U.S., would feel obligated not to drag the American people, or their own, into such a disaster. But that doesn't seem to be the case.

Though teetering on the brink of collapse, talks resumed again last week. Iran, now under a hard-line government that U.S. sanctions helped bring into power, has shown that it will not be an acquiescent negotiator, and Israel is hell-bent on sabotaging the talks. That means it will take bold diplomacy and a willingness to compromise from the Biden administration to get the deal resealed. Let's hope Biden and his negotiators have the will and courage to do exactly that.