Donald Trump loved every second of the Capitol assault. But his Fox News toadies — and his own son! — wussed out 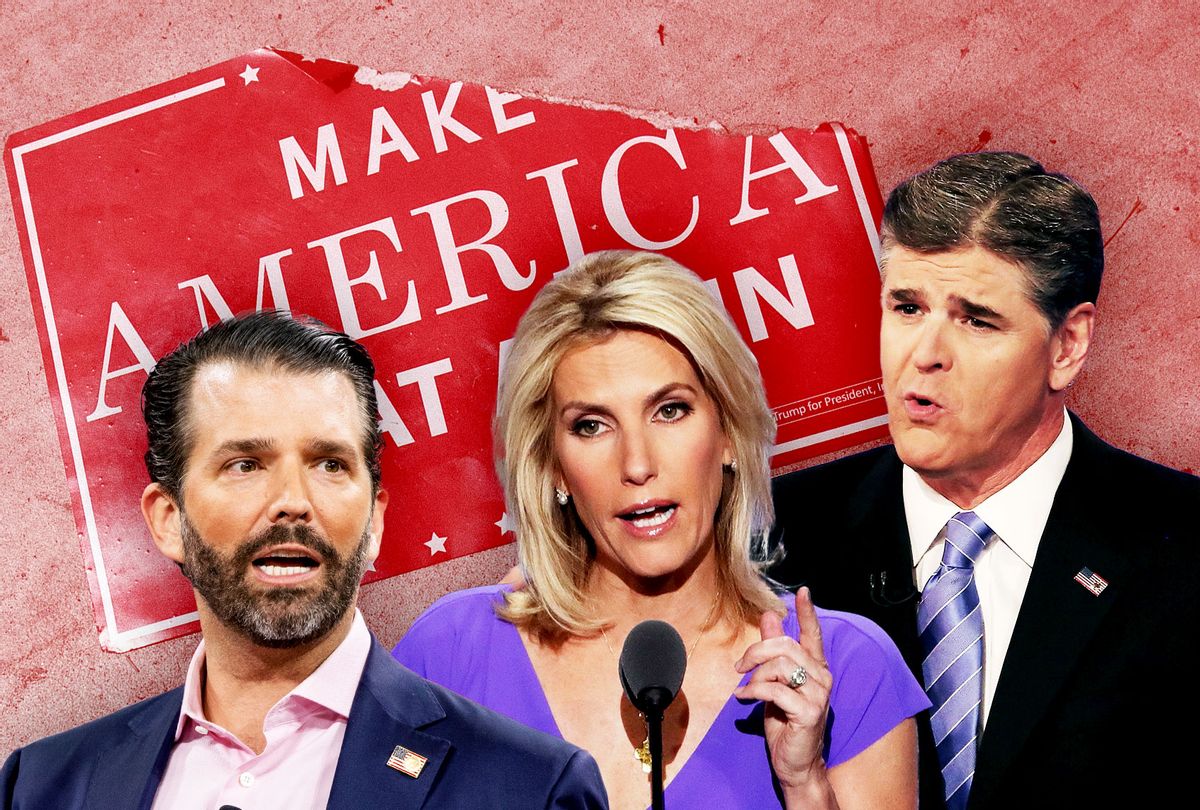 What happened last Jan. 6 in Washington created a momentary rupture in what we might call the fascist narrative of 21st-century America — that is, the dismal collective dream state, fueled by paranoia and self-loathing, in which Donald Trump and his allies hoped (and still hope) to envelop the entire nation.

You almost certainly remember that feeling, even if you don't want to think about it now: For about the 217th time in the Trump presidency, it seemed as if we were all going to wake up, blinking and startled, like TV characters returning from an especially dire alternate universe at the end of the episode. Things would begin to return to "normal," whatever we variously (and hilariously) believed that was. Republicans would feel at least a little ashamed about their five-year Burning Man festival on the blasted plains of Mordor, and would revert to their familiar routines of sanctimonious hypocrisy, dog-whistle racism and blatantly disastrous economic policy. It was morning in America!

We were young and innocent then, weren't we? No, I'm not mocking anyone for believing that Jan. 6 was a turning point. I believed it too. Several Republican senators, including Mitch McConnell and Lindsey Graham, clearly felt — perhaps for as long as 48 hours! — that a mob assault on the U.S. Capitol, incited by the president before whom they had shamelessly prostrated themselves, was going too far. A second impeachment seemed inevitable, but this time conviction felt not just possible but likely (which might, or might not, have barred the soon-to-be-former president from running again).

It even seemed conceivable — and here was our laughable mistake, oh gentle, coddled reader — that the horror and outrage expressed on TV by the Jake Tappers and Anderson Coopers of the world might transmit itself to the general public, and that a significant proportion of people who had voted for Trump but were not otherwise profoundly psychotic might shake their heads and say, Jeez, you know what? Enough with this guy!

Trigger warning: It didn't work out that way.

As we have learned this week, even purported true believers like the Fox News hosts Sean Hannity and Laura Ingraham, and even the not-yet-defrocked president's feckless eldest son, Donald Jr., were at least temporarily swayed by the prospect of a return to the realm of previously-existing political reality. While roving bands of Proud Boys and Three Percenters and Kekistanis and random rootless yahoos ransacked the Capitol, crapped in the potted plants and half-heartedly hunted for Mike Pence, Ingraham lamented (in a text to White House chief of staff Mark Meadows) that Trump was "destroying his legacy."

Why, Laura, that's positively adorable — but in which beautiful, bell-shaped flower filled with dew were you born yesterday? He was creating his legacy, girlfriend — and along the way creating another sadistic test to figure out who's utterly, cravenly loyal to him and who isn't. How do you think you did?

Once again completely justifying his father's withering contempt (and addressing him through an intermediary) Donald Trump Jr. told Meadows that Pop had "to condemn this shit ASAP" with "an Oval Office address. … It has gone too far and gotten out of hand." It's difficult to parse Junior's thought process here, using that term loosely, but the implication seems to be that overturning the election via quasi-constitutional chicanery and exploiting the loopholes in vague 18th-century laws was one thing, while a violent insurrection staged by cosplaying losers with zip ties and bear spray was quite another. Perhaps his father has since instructed him, with exactly as much sarcasm as the occasion demanded, that going "too far" and getting "out of hand" was precisely the point, and would yield benefits for their family dynasty long into the future.

Because you know who never bought any of this "sobering return to reality" crap, not even for one second? You know who never believed that the magic spell had been broken, and that Cinderella's Chick-fil-A-branded MAGAmobile — pulled by the enchanted cows of Devin Nunes — was about to turn back into an empty can of pumpkin pie filling? Donald J. Trump, that's who.

Donald Trump never believed that America would return to "normal" after his presidency because he clearly understood — with the distinctive stupid-brilliant insight that is uniquely his — that America hadn't been normal for a long time. He never believed that "reality" would reassert itself after Jan. 6, or at any other time, because he doesn't believe reality exists at all (or at least not independent of him). For him, reality is always contingent, always manufactured; it's the story you convince yourself to believe about yourself, built to appeal to the weaknesses and hidden desires of others and make them believe it too.

Whatever squeaky noises Mark Meadows may have made in the White House on Jan. 6, it was immediately clear that Trump was thoroughly delighted with what happened at the Capitol, and exceedingly reluctant to say or do anything to dissuade his followers from carrying their re-enactment of the storming of the Bastille all the way to its logical conclusion. When Trump finally began to issue public utterances that day, it was hours later, when police and National Guard troops had largely regained control of the Capitol. There wasn't the slightest hint of regret or admonition, only the already-familiar litany of grievance and injury, couched in his inimitable pseudo-declamatory prose: "These are the things and events that happen when a sacred landslide election victory is so unceremoniously & viciously stripped away."

Whether anything resembling a coherent plan to delay or prevent the electoral-vote certification was in play on Jan. 6 is not clear. That's certainly a matter of legal and historical interest, but in terms of Donald Trump's world-building enterprise, it's somewhat beside the point. Trump both believed in the righteousness of his cause — since his only cause is his own glorification — and understood that the art of the long con (or the creation of an alternate universe, which is much the same thing) has a few simple rules. Never break character or let down your guard; never admit doubt or regret or uncertainty.

If Trump had any private doubts about the way his public would understand the events of Jan. 6, he certainly didn't express them — and I don't even think the concept of "private doubt" makes sense with this person. He was confident his followers would accept whatever alternative facts he installed in his alternative universe: The insurrectionists were heroes and patriots and martyrs, showering the cops with kisses, or they were a bunch of antifa false-flag provocateurs, funded by George Soros. Or — somehow — both were true at once! "Reality," for the MAGA faithful, is first and foremost whatever Trump says it is, and is secondarily the fanfics they create for themselves. (Trump certainly did not create QAnon, and might have been telling the truth when he initially claimed he didn't know what it was.)

As for the grifters and weasels and toadies of Fox News, and as for his own first-begotten son, Trump now knows what he has always suspected: They sucked up to him for all the usual reasons — money, power, fame and other personal advantage — but were never true believers. How sharper than a serpent's tooth! Fundamentally, those whiny MAGA hangers-on and wannabes were still tethered to the world of Jake Tapper and Anderson Cooper, where there were still norms and standards and a shared sense of bottom-line reality, where it was still possible to go "too far" and where the horrified reactions of polite and normal people in the coastal cities still mattered. They can never possibly eat enough crow — or enough of something else, also a word of four letters — to fully make up for this betrayal.

Donald Trump always thought that world was bullshit — a long con executed by people who read books and went to Harvard — and now he thinks he can replace it with his own. He might have been right about the first part. I guess we'll find out about the second.