Anti-vaxxers have co-opted the pro-choice slogan “My Body, My Choice." Does that even make sense? 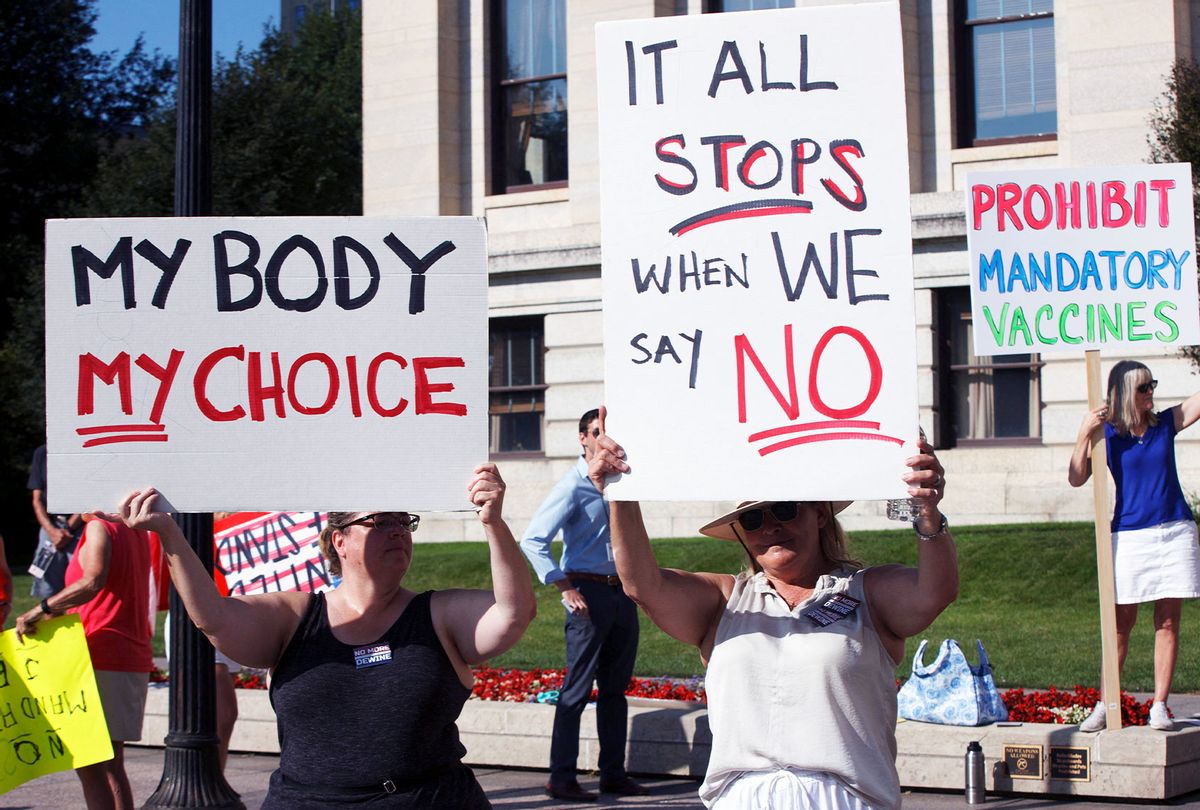 Anti-vaccine mandate protesters demonstrate, on August 24, 2021, outside of the Ohio Statehouse in Columbus, to support the Vaccine Choice and Anti-Discrimination Act, a bill that would prohibit mandatory vaccinations, and vaccination status disclosures. (STEPHEN ZENNER/AFP via Getty Images)
--

The phrase "My Body, My Choice" is mostly known as a slogan used to justify abortion choice — encapsulating the idea that, if women have autonomy over their bodies, they can choose to get an abortion (or not) if they wish. Yet since the arrival of COVID-19, the phrase has taken on a new meaning, and in new circles: first, as a rationale for not wearing masks in public settings; and later, as a rationale for not getting vaccinated.

Ironically, anti-vaxxers who most vocally appeal to the phrase tend to be conservatives who firmly reject the logic of "My Body, My Choice" when applied to abortion. Some liberals – often crunchy types – are both pro-choice and anti-vaxx, though they tend to be quieter.

As a philosophy professor who teaches logic and critical thinking, I have been following this evolution of the use of the "My Body, My Choice" slogan with great interest.

Liberal anti-vaxxers similarly argue that since society should acknowledge that women have the right to be free to decide to no longer be pregnant, we should affirm the liberty to make our own decisions about masks and vaccinations.

These arguments, however, fail to see the relevant differences between abortion and anti-vaccine / anti-mask COVID responses. Meanwhile, both liberal and conservative commentators tend to miss the most important differences. Noticing these differences might help get more people vaccinated and willing to do what needs to be done to more quickly move past this pandemic. And it might even help with protecting abortion rights too.

To begin, let's notice that everyone agrees that the message of "My Body, My Choice" is sometimes appropriate.

Suppose it's a sunny day and someone insists that you wear some sunblock so you don't get sunburnt. Or imagine someone demands you try some new cream that they believe will make your skin look better.

But you don't want to. If you respond, "My Body, My Choice," that is a legitimate appeal to the phrase. In general, we shouldn't be forced to do things to our own bodies that we don't want to do, especially in cases where nobody else is harmed by what we are doing.

Pro-choice people often appeal to this idea to justify abortion. While they might not put it in these words, they believe that embryos and at least beginning fetuses aren't really harmed by abortions: they can't feel anything or have any perspective on the world. They are killed, yes, but they aren't harmed, at least not in the ways born people are harmed if killed.

That is a plausible view, although it does depend upon an abstract, but not uncommon, sense of what harm is and knowing what embryos and beginning fetuses are like.

Some pro-choice people also assert "My Body, My Choice" since they believe that we shouldn't be forced to do things with our bodies if nobody has a right to demand that we do those things.

The idea behind this response is that, even if fetuses are persons with the right to life and would be harmed by abortion, abortions are nevertheless permissible, since we aren't always obligated to save or preserve other people's lives and we shouldn't be forced to do that: women's rights to their own bodies, even when their bodies are needed by others to live, can justify abortion. So "My Body, My Choice" is justified by the right to one's own body and the fact that others do not have rights to other people's bodies.

Abortion critics deny both these pro-choice applications of "My Body, My Choice" to abortion. They might say that, unlike one's choice to wear sunscreen or skin cream, that with abortion it's not just your body! In other words, they might say that it's not OK to make choices that negatively affect others' bodies, especially if that results in them being killed. And we often really should help other people, especially children, whether they have a right to that help or not: talk of rights can distract from basic concerns about doing good for others.

At first glance, this reasoning – when applied to abortion – may seem plausible, at least to some: after all, fetuses are alive, and human (at least in a biological sense), and all the people we know of are human. (This can lead people to mistakenly believe that being human and being a person are the same thing). And it is normal to feel like we really should help others. Moreover, many people have seen what appear to be gruesome pictures of abortions and conclude that all or most abortions are like what they've seen in those pictures and so wrong, according to what they think are basic and obvious moral standards.

The case against abortion isn't ridiculous: abortion critics have claims and observations that need to be seriously engaged with. Doing this successfully, however, requires thinking about what rights are and why anyone has them, skills in navigating potential moral conflicts, and understanding what embryos and fetuses and most abortions are actually like. Many people simply dismiss, without engaging, the case against abortion, and this strategy does not seem to be working well.

This is because, rarely, if ever, does not wearing a mask or not getting vaccinated directly and intentionally cause the death of anyone else. People who object to abortion do so for that exact reason – they claim abortion is wrong because it intentionally kills an innocent person – and that reason just doesn't apply to mask-wearing and vaccination.

So in that way, they can sensibly deny that "My Body, My Choice" justifies abortion, but affirm that it justifies their non-compliance concerning wearing masks and getting vaccinated against COVID. They can claim that abortion is direct, intentional killing which is wrong, and that not wearing a mask or getting vaccinated is not that.

This, however, is where things might end, in terms of things making sense. This is because there are more ways to do wrong than intentional killing — and human actions can sensibly be prohibited by the government, even if they don't constitute something as egregious as intentional killing.

People not wearing masks (in many public, indoor places: none of this applies to hermits and people in literally isolated communes) and/or not getting vaccinated, does create some risk of others being seriously harmed, such as dying, even though that harm is not intentionally inflicted: that a virus passes airborne from someone to someone else is usually not a matter of what anyone intentionally does; although it sometimes is — for example, when horribly rude, disrespectful and gross people intentionally cough and sneeze on others.

Certainly, at a collective level, that risk is high: the fact that too many people are not wearing masks and getting vaccinated is contributing to — perhaps in a sense creating — our present problems with COVID. In nearly all cases, nobody is better off for not getting vaccinated: not that individual, the people around them or society as a whole.

Many (pro-choice) people think that people who call themselves "pro-life" would care about others' lives in these ways and be willing to put in the minimal effort to minimize risks here. This expectation is understandable, given the "pro-life" label. But it's important to understand that the typical anti-abortion argument, which appeals only to the wrongness of intentional killing, does not imply its corollary: that in being pro- "life" in the general sense, masking and vaccinations should be required so as to perpetuate all of us living longer.

Nevertheless, these easy efforts to try to reduce harm and risks of harm to others are required not by any sense of being "pro" life, but rather by basic moral decency: while we really should be Good Samaritans to other people, here we only need to be Minimally-Decent Samaritans, since doing what's right here is easy, of minimal risk to ourselves and we ourselves might benefit from doing so. Wearing masks and vaccinating does that better than refusal does.

But there is one more group that appeals to the "My Body, My Choice" proposition in a way that might seem more consistent. What about pro-choicers who refuse to mask and vaccinate?

But this pro-choice case in favor of abortion does not extend to refusing masking and vaccinations. Even if fetuses are not persons, COVID-avoidant people are, well, people. And people have the right to demand that, if you are going to be around them and so be a potential danger, you must do what will make your body safer to everyone else's body: it's not just your body! This is not anyone claiming a right to your body: again, if you want to stay home and not interact with COVID-avoidant people, that's your right.

It's a consequence of our own rights to our bodies that we can legitimately tell others that, unless they are going to make an adequate effort to be safe, they can't be around us. Insofar as the government is supposed to protect individuals' rights to their lives and liberty, government intervention is appropriate, especially if people won't willingly respect others on their own free will.

"My Body, My Choice" is about freedom and liberty, but for all who have it. When our choices restrict others' freedom, we cannot make those choices. This is part of why abortion is generally OK: a beginning fetus lacks any will or desires necessary for having or lacking any type of freedom or autonomy. And for people who don't want to get COVID, their liberty should be respected: for them, we should be vaccinated and wear masks, if we aren't doing so already. It's our bodies, and so our choice to not be around bodies that choose to not respect our bodies.