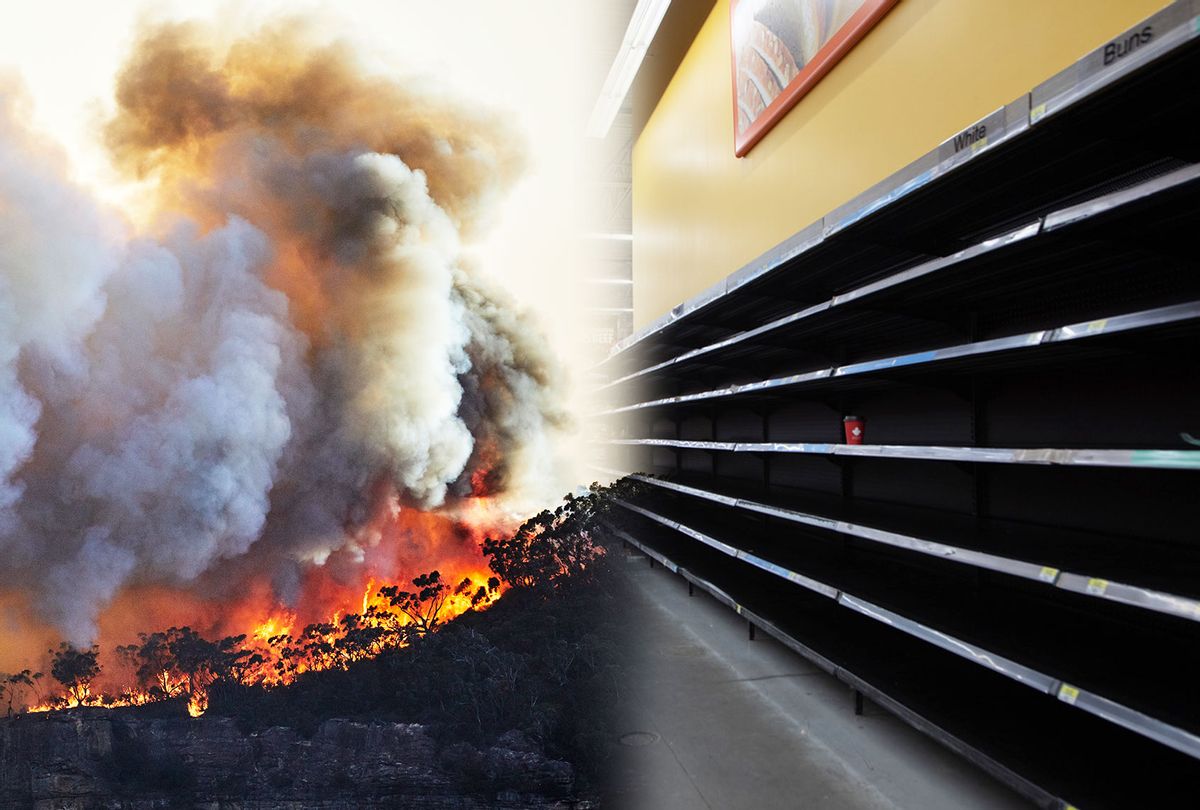 Out of control fire on Narrow Neck Plateau, Katoomba, Blue Mountains, Australia. Climate change is causing extreme weather, prolonged droughts and increasing bushfires | Empty store shelves are seen in a supermarket as people has been stocking up for food and other essential items fearing the supply shortages (Photo illustration by Salon/Getty Images)
--

Before the days of antiseptic supermarkets, with their fluorescent lights and linoleum floors, food was sold in very different types of markets, most of which would not pass muster to a modern health inspector. Take Medieval Europe: Even the sturdiest contemporary carnivore might have felt a bit queasy at the sight of animals being slaughtered, which would happen not far from where the cuts of meat were ultimately sold (if they were cut up at all). Farmers would wheel in their produce from plots of land within walking distance of their homes, or at most a short horse ride away. By contrast, citizens of the early 21st century are used to their food coming to them in the same way as their cars, their clothes and their household appliances — through sprawling international supply chains.

Unfortunately, just like a chain is only as strong as its weakest leak, a supply chain can become inefficient or fall apart if there is even a slight hiccup. This is especially so when the supply chains overlap in so many ways that it's more of a "supply labyrinth" or "supply knot" than a supply chain.

Consumers may already be starting to feel that the more disparaging terms are more appropriate. Retailers are reporting rising costs for holiday-returns, and the Federal Trade Commission (FTC) has launched an inquiry into a number of supermarket chains, retailers and food corporations to get to the bottom of the seemingly endless product shortages.

Based on this reporter's own journey to a pair of local retail outlets, including Walmart and Target, it was noted that customer complaints seemed to fall into three major categories: Electronics (like video game consoles or VR headsets), frozen food items (like chicken wings and pizzas) and sanitary products like (you guessed it) toilet paper. Each of those items has a series of interconnected supply chains, from the foods themselves to the added ingredients and the packaging, not to mention (in the case of frozen items) extra care taken for transportation and storage.

It is literally impossible to map the origin of every single item used in every single one, much less plug all of that data into one central database for reference. This means that, when a major disruptive event occurs across the planet, this delicate and interconnected web of chains can be easily disrupted in countless untraceable ways.

The COVID-19 pandemic was just such a worldwide disruptive event.

"The global economy is a complex system of national and local economies," Christa Court, an assistant professor of regional economics at the University of Florida, told Salon by email. The pandemic brought about an abrupt halt to major economic sectors across the planet, which in and of itself had ripple effects on countless smaller business transactions. Not all of these could simply wind back up once the lockdowns were reversed. Even then, those reversals often did not immediately allow a full restoration of economic activity, and many times were applied so erratically that they wound up being integrated into the business environment.

"By now, we are all familiar with the term 'pandemic-induced supply chain disruptions,' whereby the evolution of the pandemic itself (trends in cases and deaths) as well as the policy responses to the pandemic ('shutdowns,' stay-at-home orders, vaccine or mask mandates, etc.) have resulted in massive shifts in supply and/or demand for many products and sectors," Court pointed out.

When it comes to food-based supply chains, climate change is another major culprit, albeit one that is very difficult to quantify. Unlike other economic sectors, where there can disruptions from the demand end as well as the supply end, people never decide they have had enough of food. (They may, of course, alter their dietary preferences.) When there are supply chain issues, it is usually because some unwanted outside variable has made it more difficult for those who produce food to do their job. Climate change causes many of those unwanted outside variables: Warming temperatures harmed American corn yields in 2010 and 2012, as well as $220 million in losses for Michigan cherries in 2012. As weather continues to warm, crops that depend on precise temperatures at specific times will be thrown off kilter or possibly wiped out. While moderate warming and carbon dioxide increases will help some plants grow faster, even they will ultimately be harmed by the droughts and floods that will harm so many other crops.

"A major drought in California or freezing temperatures in Florida can throw a wrench into this market," Dr. Ariel Ortiz-Bobea, an associate professor of applied economics at Cornell University, told Salon in August. "Those events can drastically reduce the supply of oranges from those regions. While oranges can be produced in other areas (e.g. Brazil), acquiring them is much more expensive especially if the supply chains are not already established and prepared to larger volumes."

In addition to climate change, there is also the built-in structural problem of capitalism itself: Concentration of power, and the fact that supply chain disruptions also exist because the global economic system is built around what individual powerful corporations have decided will maximize their profits. A system that prioritizes profitability over everything else will make choices about who gets what first based on how they can make the most money, not on who needs it most or what will be most efficient. That means that supply chain disruptions, though not ideal, are also not viewed as a company's absolute worst case scenario.

"To analyze supply chain disruptions as if they were exceptional is a mistake," Dr. Richard Wolff, emeritus professor of economics at the University of Massachusetts Amherst, told Salon by email. "They are regularly recurring products of capitalist decision-making. It is only because of capitalists' buck-passing that their media focus us on the conditions (forever changing) and away from the profit-maximizing strategies of capitalists' responses to those changing conditions."

If there is one silver lining to the supply chain crises, it is that an increasing number of those companies are deciding  that it makes more sense to "re-shore" jobs than it does to have sprawling, worldwide supply chains. The term "re-shore" is a play on "offshore," which refers to moving jobs overseas. "Reshoring" means those jobs would be brought back to the United States.