Decades of work are riding on the James Webb Space Telescope. What happens if it fails?

As one of the most expensive space missions in history, there's a lot on the line for launch 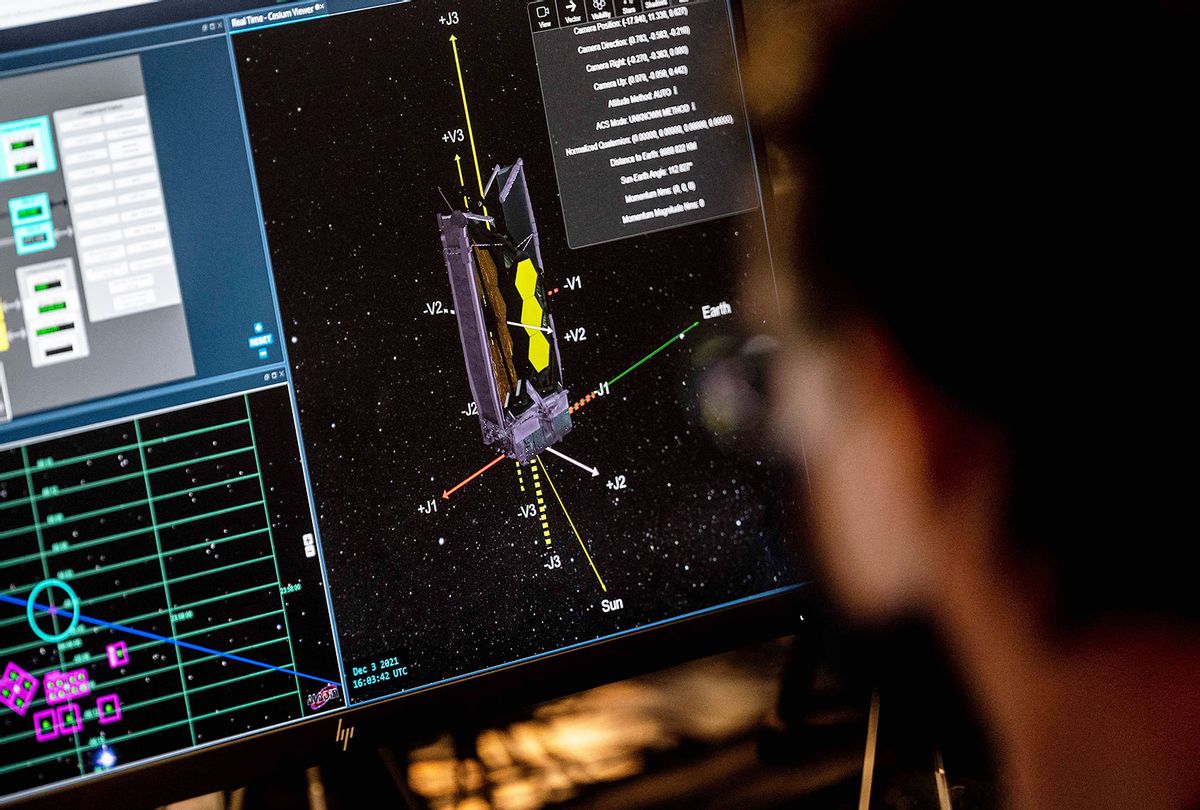 A technical drawing is seen on screen as Systems Engineers Christopher Murray (R) works at his console at the Webb Mission Office ahead of the James Web Space Telescopes launch at the Space Telescope Science Institute (STScI) in Baltimore, Maryland, on December 3, 2021. (JIM WATSON/AFP via Getty Images)
--

On Tuesday, NASA engineers announced that the much-anticipated launch of the James Webb Space Telescope (JWST) has been delayed "​​to no earlier than the 24th" of December. (The mission was previously scheduled to blast off Dec. 22 of this year.)

It isn't the first time in 2021 that the stunningly complicated telescope's launch has been pushed back — in fact, it's the fourth. This time the delay was due to a "communications issue between the observatory and the launch vehicle system," according to a brief statement by the space agency.

For those who don't follow space news, JWST is a once-in-a-generation space observatory poised to usher in a new chapter for astronomy. It's also one of the most expensive space missions (roughly $9.7 billion) in history. As the Hubble Space Telescope's successor, JWST will be launched on top of the nose of an Ariane 5 rocket and moved to a position nearly one million miles from the surface of the Earth. Once it arrives at its final destination, in about six months' time, JWST will peer into distant corners of the universe, survey the atmospheres of Earth-like exoplanets, and more.

In short, the James Webb Space Telescope will undoubtedly make discoveries that will change humanity's understanding of the universe — but first, it has to make it to its final destination. And if anything goes wrong, there are no guarantees that scientists here on Earth can fix what's wrong with it. That's very different than the Hubble Space Telescope, which, by virtue of its low-Earth orbit, was serviced by NASA astronauts five separate times between 1993 and 2009.

Yet because of the necessity for nothing to go wrong, scientists and engineers have spent two decades on extensive safeguard testing to anticipate anything and everything that could possibly go wrong.

"When something is identified that is seen as a risk, there is a process that starts to either assess that the risk is acceptable — meaning it wouldn't be too bad if the thing one is worried about happens — but if it's not acceptable the risk is mitigated or eliminated," said Massimo Stiavelli, Head of the Webb Mission Office, in an interview with Salon. "So almost by definition, when a project like this launches, there are no serious risks left, because you want to address them all before launching."

Hence, the most recent delay.

[Related: Hubble's enormous, ambitious successor is poised to change our understanding of the universe]

Of course, all those safeguards aren't a surety, because there is no testing ground quite like reality — and unlike in, say, sports, engineers don't get any practice runs.

The launch of the JWST is bound to be fraught. First, there's the launch itself. On a date, currently no later than December 24, the Ariane rocket will launch with the JWST attached to its nose. There will be lots and lots of shaking for the eighteen 46-pound mirrors that comprise the observatory. Of course, the ability of these mirrors to withstand shaking has been tested extensively, Stiavelli said, adding nearly 20 years of preparation have gone into making sure this launch goes smoothly.

"The observatory has been tested to be able to survive the vibrations and sound waves associated with launch," Stiavelli said. "We know it can survive, but it's still an exciting moment."

Another "exciting," moment, Stiavelli said, will be the sunshield deployment two and half days after the launch.

"Unlike some of the other tests that we have done, the sunshield, of course, will be deployed in zero gravity," Stiavelli said. "And it's hard to add zero gravity on the ground, so we had to use computer models to test that. To the best of our knowledge, it will work, but it will be nice to see it deploy."

After the initial set of major deployments, which will take an estimated six days to complete, Stiavelli said he will be "personally happy."

"But I'm sure the people who developed the instruments will not be happy until they see their instruments fully working six months after the launch," Stiavelli said.

Avi Loeb, the former chair of the astronomy department at Harvard University and author of "Extraterrestrial: The First Sign of Intelligent Life Beyond Earth," tells Salon that humans on Earth won't know if anything is wrong with the instruments on JWST until it actually starts to observe the sky — which could be a bit problematic.

"Unfortunately, its location at the second Lagrange point at four times the distance to the Moon will not allow us to serve it as we did with the Hubble Space Telescope — which is 2,600 times closer," Loeb said. "The response will depend on the mode of failure; some problems can be partially solved remotely."

Indeed, Stiavelli said, the JWST team has practiced routine blind drills — meaning that engineers on Earth don't know what problem they have to solve until the drill — to figure out workarounds for potential issues that could arise.

Stiavelli described these "rehearsals" as the process of "injecting anomalies," then watching the team react to them and try to fix them in real time. "The team is very well trained for these kinds of events," he said. "In case of a big disaster or something that goes wrong and is not recoverable in the way I described — then we would be in bad shape."

For example, if JWST was hit by a massive asteroid or blew up during launch, there isn't an immediate replacement for the observatory. And it would be hard to get the funding again to build another one. Plus, space observatories like JWST don't have an insurance policy.

"It would be very expensive to build another one; some of the equipment that was used is no longer available, so it wouldn't be easy. I'm not qualified to answer exactly how expensive a duplicate would be, but I'm sure it would be very expensive," Stiavelli said. "And another factor is that in something like this that took a long time to develop, a lot of the people that may have worked on a particular component may have retired."

"If the problem is more serious [than what can be fixed remotely], the astronomy community together with NASA will have to decide whether to invest the necessary funds to build another one," Loeb said.