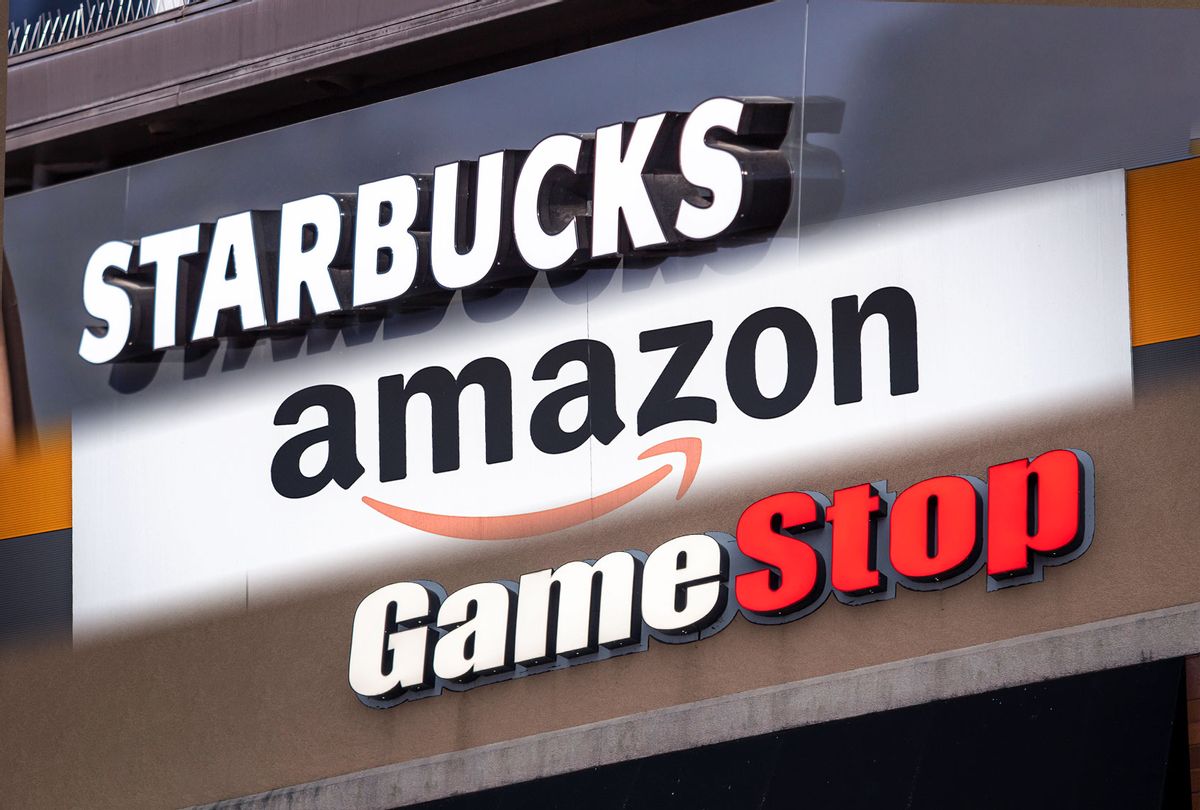 Much was made of the "death" of political comedy during the Trump years. Satire and parody, many argued, need foils of real-world respectability. And Donald Trump, the GOP's new lodestar, has pretty much dispensed with the conventions of political decorum. But while postured propriety may have lost its luster in the political realm, it remains alive and well in the private sector, making Corporate America's blunders all the more visible.

2021 saw endless gaffes and gaucheries from powerful American corporations. Some were caught red-handed in embarrassing and nefarious schemes never meant for the public eye. Others waged embarrassing public relations offensives that earned unintended blowback. To critical onlookers, all of the failed contrivances stand together as one big comedy of terrors.

Here are the private sector's top ten fuck-ups of 2021:

In February, executives from Ozy, a digital media company whose financial practices have been widely scrutinized, were closing in on a $40 billion cash injection from Goldman Sachs when they held a videoconference to hammer out the details of the deal. As The New York Times' Ben Smith would later go on to describe, the Feb. 2 meeting was a bizarre mix of technical difficulties and deception.

During the meeting, Alex Piper, the head of unscripted programming for YouTube Originals, was supposedly having technical difficulties on Zoom, so all parties switched over to teleconference. Once the switch was made, Goldman's executives heard from a man, apparently impersonating Piper, who gave a rapturous review of Ozy's management. After circling back with YouTube, Goldman quickly realized that the man they'd heard from was Samir Rao, the co-founder and chief operating officer of Ozy itself.

Tech bros are notorious for their professed love of "free speech" – but the managers at Basecamp didn't even bother to pretend.

In April, the web software company's leadership formally prohibited any and all "societal and political discussions" in internal company chat rooms, calling such communications "a major distraction" from productivity in the workplace. CEO Jason Fried and co-founder David Heinemeier Hansson reportedly announced the policy in a blog post, according to The Verge, and later held an hours-long all-hands meeting that left several employees "in tears" over the company's decision.

The conflict reportedly arose in part from a "long-standing company practice of maintaining a list of 'funny' customer names," some of which include those of Asian and African descent. Additionally, the company's longtime head of strategy reportedly questioned the existence of white supremacy.

Hours after the company's ban was announced at least 20 employees – over a third of Basecamp's entire workforce – resigned in protest.

In May, as Los Angeles was struggling to contain a 1,200-acre fire in the Pacific Palisades neighborhood, Citizen, the "public safety" app that gives users real-time crime alerts, thought it might help out. Early into the containment effort, investigators had ruled the fire an arson. So Citizen put out a $30,000 bounty to help locate the suspect, offering cash payments to any user with information about who might've started the fire.

According to VICE, Citizen CEO Andrew Frame led a "citywide, app-fueled manhunt," directing his employees to continue upping the ante on the bounty as users struggled to identify the arsonist. "FIND THIS F*CK," Frame told his employees over Slack. "LETS GET THIS GUY BEFORE MIDNIGHT HES GOING DOWN."

After Citizen identified Devin Hilton, a homeless man, as the suspected arsonist, circulating Hilton's photo to roughly 861,000 users, law enforcement authorities shortly arrested Hilton, and later found they had scant evidence to charge him with anything.

After Hilton was eventually released, Citizen apologized: "Once we realized this error, we immediately retracted the photo and reward offer. We are actively working to improve our internal processes to ensure this does not occur again. This was a mistake we are taking very seriously."

Earlier this year, things at online mortgage originator Better.com seemed to be going well – at least on paper. The company had significantly raised its profile after announcing back in May that it would go public via an SPAC merger. And last month, Better revealed that it would be receiving a $750 million cash injection from investment management company SoftBank.

But on December 8, CEO Vishal Garg did something that, according to reports, few employees expected. Citing issues with "the market" and "productivity," Garg laid off 9% of his entire workforce just before the holidays, in the middle of the COVID-19 pandemic, over Zoom.

Facing a maelstrom of criticism from employees, who were given a month's pay and three months of benefits, the executive only felt inclined to apologize for the way he handled things.

"I failed to show the appropriate amount of respect and appreciation for the individuals who were affected and for their contributions to Better," Garg said.

"I blundered the execution."

AT&T, the world's largest telecommunications company, has apparently been central to the success of one of the most corrosive news channels in America.

In October, a Reuters investigation found that AT&T has been the financial life force of One America News Network (OANN), a far-right news channel known for peddling baseless – and downright dangerous – conspiracies theories about the pandemic and the 2020 election.

According to OANN founder Robert Herring Sr., the far-right network was originally inspired by AT&T executives, who wanted to monetize a conservative news network. AT&T has also reportedly disbursed roughly $57 million in monthly fees to OANN since 2013 and at one point sought to buy the channel for $250 million.

Shortly after the report, AT&T said it's "never had a financial interest in OAN's success and does not 'fund' OAN." (And we should probably trust AT&T on this point since the company is squeaky clean otherwise.)

In November, as Starbucks employees in Buffalo, New York were organizing to hold a historic union vote, management threw out a series of Hail Marys in a bid to squash the effort. One of these counter-offensives came in the form of an appearance from billionaire Howard Schultz, Starbucks' former chairman, who sallied over to Buffalo to vaguely dissuade pro-union workers from unionizing.

In front of hundreds of baristas, Shultz expressed that Starbucks is "not a perfect company," saying: "We listen. We learn. We get better together." Schultz, a Jew, then thought it wise to invoke a Holocaust metaphor by recounting a story once told to him by a rabbi.

Referencing blankets shared by prisoners at Nazi concentration camps, Schultz said, "So much of that story is threaded into what we've tried to do at Starbucks – is share our blanket."

4. Amazon executive claims company is "the Bernie Sanders of employers"

Starbucks isn't the only company that sufficiently embarrassed itself during a union effort. Back in March, Amazon was also in the midst of waging a comprehensive – and ultimately successful – campaign to defang a union effort led by warehouse workers in Bessemer, Alabama.

At the time, Sen. Bernie Sanders of Vermont, long a crusader of labor rights, announced that he'd be speaking in Birmingham to offer support for the union drive. But Dave Clark, the CEO of the company's worldwide consumer vertical, found Sanders' impending presence a tweetable offense.

The very next day, stories of Amazon workers having to pee in bottles to meet efficiency demands began making the rounds online. Amazon immediately denied any reports of this happening, and later apologized for denying them.

It isn't often that you get to see a corporate lobbyist caught with their pants down. But this year, thanks to Greenpeace, we saw just that.

Back in July, Unearthed, an environmental news team run by Greenpeace UK, led an undercover "sting" operation against two Exxon lobbyists to gain better insight into the dark art of oil lobbying. Posing as corporate headhunters, Unearthed ensnared Keith McCoy (a senior director for federal relations at Exxon) and Dan Easley (a former Exxon White House lobbyist), asking them questions about their experiences laundering the company's interests through the federal government.

McCoy and Easley soberly remarked on the many ways in which Exxon has effectively shut down meaningful climate action, even describing oil industry trade groups like the American Petroleum Institute as the company's "whipping boys."

"Did we join some of these 'shadow groups' to work against some of the early efforts [at regulation]? Yes, that's true," McCoy said during his interview. "But there's nothing illegal about that. You know, we were looking out for our shareholders."

After the report, Exxon CEO Darren Woods claimed that McCoy and Easley's remarks were  "entirely inconsistent with the way we expect our people to conduct themselves." (And he's not entirely wrong; if you're trying to hide the fact that your business depends on the earth's destruction, you'd want your lobbyists to be a bit more discreet about it.)

Back in January of this year, GameStop – a video game retailer that had been struggling financially years before the pandemic – was facing certain death. Major institutional investors on Wall Street, like Melvin Capital, had put down massive short positions on the stock, and so the company's downfall seemed like a self-fulfilling prophecy. That is until a brigade of Reddit investors entered the picture.

Seeing that Wall Street was shorting the company, Reddit users from an amateur retail investing forum known as "r/wallstreetbets" led an offensive against the institutional bigwigs, collectively pouring millions of dollars into GameStop. The effort caused GameStop's stock to skyrocket by over 2,000%, trapping Melvin in a shortsqueeze. (This means that Melvin was forced to buy GameStop's stock to cover its losses – a move that caused the stock to rise even more.)

Things got so chaotic that billionaire investor Leon Cooperman went on CNBC to deliver an unhinged screed about Reddit's "attack" on wealthy people, saying that "fair share is a bullshit concept. It's just a way of attacking wealthy people. It's inappropriate and we all gotta work together and pull together."

In the end, Melvin lost around 53% of its assets ($4.5 billion) as a result of the affair and had to be bailed out by another asset manager.

1. Facebook changes its name amid a devastating whistleblower scandal

This year, Yahoo Finance selected Facebook as the "Worst Company of the Year" – and for good reason.

In September, with help of The Wall Street Journal, ex-Facebook employee Frances Haugen began leaking a trove of damning internal documents, which reveal that Facebook is both aware of its harmful impacts on Americans and has done next to nothing to mitigate them.

Thousands of documents leaked by Haugen show that the company systematically prioritizes profit over combating hate and misinformation, a lapse that directly fomented the Capitol riot, according to The Washington Post and has led to genocidal violence abroad. In an interview with "60 Minutes," Haugen claimed that Facebook established a program known as Civic Integrity, designed to combat misinformation. However, this program was dissolved ahead of the 2020 election, which she said was a "betrayal of democracy."

By the end of October, Facebook, facing perhaps more public scrutiny than any company in modern history, changed its name to "Meta" to reflect its sudden interest in developing the Metaverse, a hypothetical 3-D version of the Internet. Coincidence? I think not.