Democracy vs. fascism, part 1: What do those words mean — and do they describe this moment?

Joan Didion would tell us we're avoiding obvious facts: "Democracy" is failing, and its opponents are nothing new 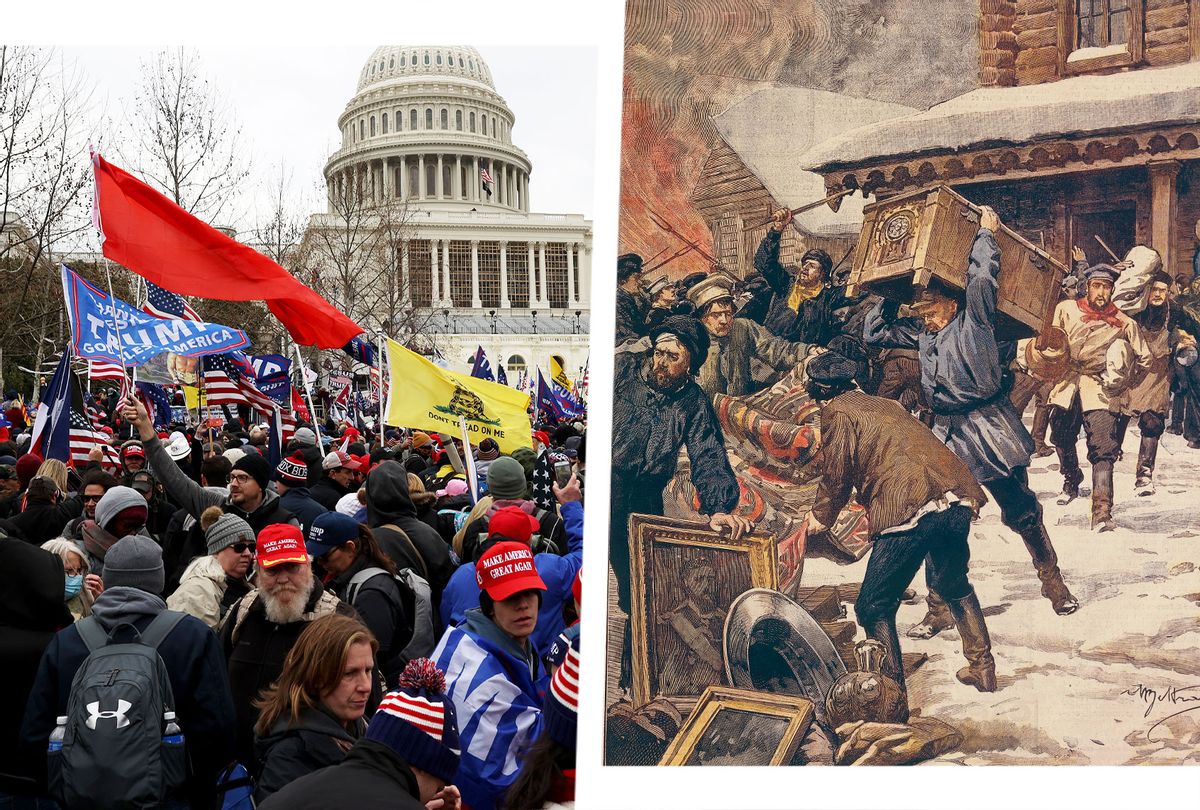 Protesters gather outside the U.S. Capitol Building on January 06, 2021 in Washington, DC. | The Russian Revolution: Peasants plundering the properties of the rural rich (Photo illustration by Salon/Getty Images)
--

There's considerable talk about "democracy" and "fascism" these days, as the poles between which our society is supposedly suspended. But what do those words actually mean? If we admit, as I think we must, that in both cases what it says on the box is not exactly what's inside — that those are approximations or generalizations or terms of art — do they really help us understand the reality of this dark and puzzling historical moment, or are they just getting in the way?

Joan Didion would have tried to ask those questions, and to answer them. We should all lament that she will not wage that struggle, in full awareness that we might not have enjoyed the results. Didion understood, above all, that imprecision of language reveals imprecision of thought, and that the failure to "observe the observable" — her famous dictum for journalists — leads reporters and writers away from a genuine effort to tell the truth (however conditional and uncomfortable that may be) and into the self-flattering realms of fantasy, propaganda and myth.

RELATED: Golden State of hypocrisy: An interview with Joan Didion

Which is where we are, I'm afraid, with "democracy" versus "fascism." The democracy that Americans have been taught to venerate, and that many of us now seek to defend, is a limited and specific historical phenomenon, which has been on a downward trajectory of slow decay and creeping paralysis for at least 30 years. One core problem that the Democratic Party and many people in the political and media castes have been unwilling to confront directly is that defending institutions that patently do not work is a position of pathetic weakness, not to mention near-certain defeat.

As for the homegrown authoritarian movement some of us designate as fascism, it is rather like an opportunistic infection. The Trumpist insurgency did not cause the crisis of democratic legitimacy, and could not have taken hold or spread so rapidly in an actually functioning democracy. While it certainly bears some hallmarks of classic 20th-century fascism — hazy notions of racial, tribal or religious purity, and a fantasy of a lost golden age — it lacks many others, and in any case Hitler and Mussolini did not invent those phenomena. This particular populist uprising is both something new in American politics — in that sense a telltale sign of a world power in terminal decline — and something very old, the residue of deeper conflicts that long predate the concepts of democracy and fascism, or for that matter America.

It was Joan Didion who told us — decades ago, in essays so far ahead of their time they were understood as flights of literary fancy — that it was more accurate to say that politics was a subset of show business than the other way around, and that American political conventions had become scripted spectacles of pseudo-democracy, formally and structurally akin to the sham elections held in the Soviet Union. She made those observations while covering the presidential campaign — in 1988.

Didion never wrote anything about Donald Trump and his so-called movement, so I won't presume to know what she thought. Her declining health in recent years was only part of the reason; according to her nephew, the filmmaker Griffin Dunne, who directed the 2017 Netflix documentary "Joan Didion: The Center Will Not Hold," she simply didn't find Trump all that interesting:

I haven't talked to her in great detail about this, but I think that someone like Trump is just a less interesting figure for her to weigh in on because there's really no subtext. He's so impulsive and everything comes out of his forehead; what she specialized in, when writing about politics, was the message that politicians were trying to send and what the message really was. There's no there, there with Trump, and he's not even consistent.

Every remotely honest journalist, and a great many civilians as well, can relate to that: The absence of subtext, of coded or hidden meanings, is exactly what made the Trump presidency so addictive and/or so infuriating, depending on your perspective, and why he remains the focus of media fascination nearly a year after leaving the White House. (This is hardly a trade secret, but even on Salon stories about Trump tend to attract more readers than stories about Joe Biden, and that's clearly not based on political preferences.)

But seeking to decode the supposed binary (or perhaps the dialectic) of "democracy" versus "fascism," in hopes of uncovering what those terms conceal or what they reveal, is unmistakably a Didion-like project. What we call "democracy," in the context of the Trump movement's efforts to overthrow it, is structured by antiquated representational rules, an ungainly federal system and an entrenched partisan duopoly, which in practice have led to increasingly undemocratic or anti-democratic outcomes.

In the interests of observing the observable, I am compelled to point out that roughly half the American population — overwhelmingly among the poor and the working class — typically does not vote, and most of those people either view the political system with cynical detachment or ignore it altogether.

None of the dogmas shared by liberals infuriates me quite as much as the sanctimonious tendency to blame non-voters for Democratic defeats. This is inevitably framed in terms of an imaginary cadre of white middle-class radicals who were too puritanical to vote for Hillary Clinton or Al Gore (or whomever) but ought to have known better. To the extent that group exists, it is inconsequential, whereas the set of lower-income and poor people who never vote — which crosses all possible racial and regional boundaries — is enormous, and to a large extent constitutes the defining characteristic of American "democracy." Hand-wringing liberals are notably reluctant to discuss that latter group: It would be politically unsavory to blame those people for abstaining, but unacceptable to admit that their refusal to participate in a system that does not represent them is not irrational.

To use the Marxist term — something Joan Didion would likely never have done — our system is a "bourgeois democracy," now facing its inevitable moment of crisis. That is a descriptive term, not an insult: A bourgeois democracy is structured around the primacy of property rights, a "free market" and individual freedoms, all concepts that effectively did not exist before the 18th-century Enlightenment. In the classic Marxist analysis, Democrats and Republicans represent the interests of competing factions within the property-owning middle and upper classes. In the larger context of American political history, that's far too simplistic. But in terms of the last half-century or so, and how we got where we are today, it's also not blatantly wrong.

Another, somewhat subtler article of liberal or progressive dogma — and a far more convincing one, until very recently — is that if poor people were to vote in much greater numbers, Democrats would win every election and Republicans would be forced to face radical change or political doom. That dogma may still be correct in a larger sense; it certainly hasn't been systematically tested. But the great surprise of the 2020 election (echoed on a smaller scale in the 2021 off-year elections in Virginia and New Jersey) was that dramatically higher turnout did not produce a Democratic landslide, but rather a far more muddled political landscape. Joe Biden's victory was much tighter than polls suggested; Democrats expected to win seats in the House but wound up losing 13 — and only "won" a 50-50 Senate (I would argue) thanks to Donald Trump's petulant pot-stirring in the Georgia runoff elections.

RELATED: Can the real lessons of Virginia rescue the Democrats in 2022? It's definitely worth trying

Returning once again to the doctrine of observing the observable, this offers us important clues about two different but closely related phenomena: the current state of the Democratic Party, and the class character of the Trump insurgency. There's a great deal of discussion about the former topic, but the latter has become virtually untouchable (at least on the liberal-progressive "left"), for much the same reason that the non-voting population is viewed as an implacable, undiscussable feature of the landscape. Both questions, if examined too closely, threaten not just to undermine the supposed stability of the supposed democratic system, but to reveal that the stories we tell ourselves about how that democracy works, and even about how it could be improved, are not true.

It is true, of course, that an exclusive or primary focus on class in American politics has sometimes been used to demote or defer the importance of racism and white supremacy. The cadre of mainstream journalists who staged anthropological interventions in heartland diners after the 2016 election, and came away with tales of "economic anxiety" among the white working class, were justly derided for both cluelessness and condescension. Race and class have never been independent variables in American history, or at least not since the early 17th century. There is no way to consider one without the other; the friction and interaction between them, to a significant extent, is the story of American history.

It does not follow that in order to correct for racism we must abandon all considerations of class, although that question has provoked a useless and destructive internal debate within the Democratic Party. It certainly doesn't follow that the role of class conflict in history is irrelevant to understanding the (blatantly racist) MAGA movement, which cannot strictly be defined in terms of its present-tense socioeconomic status or its irrational and alarming beliefs.

In my next article on the vexed relationship between "democracy" and "fascism," I will approach that third-rail issue in American politics, and propose that the class character of the Trump rebellion is baked in more deeply than we can readily perceive. On one hand, we do indeed confront a predominantly white and predominantly rural subset of the working class that has abandoned what we now call "liberalism" (or been abandoned by it). On the other, we confront an entrenched pattern that goes back well beyond the invention of such terms, to the very beginnings of capitalism, when the "peasants" were likely to side with monarchs and aristocrats against the bourgeois revolutionaries who offered them a new vision of "freedom," which they concluded (with some justice) was a trick.