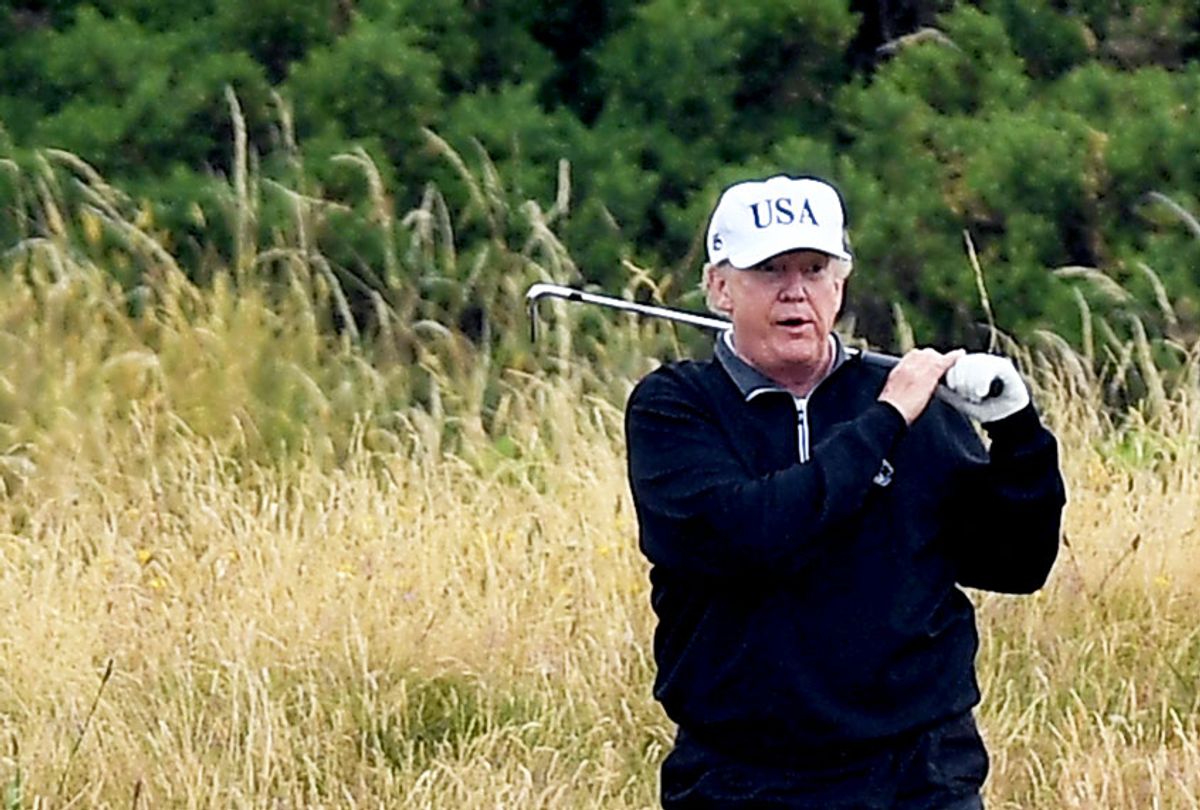 Former President Donald Trump's golf resorts in Scotland claimed nearly $4 million in COVID aid from the British government while he was in office, financial filings in the U.K. show.

The ex-president's struggling resorts, Trump Turnberry in Ayrshire and Trump International Scotland in Aberdeenshire, lost millions last year amid the pandemic (whether counted in dollars or pounds) and received hefty furlough payments after slashing their workforce. The U.S. Constitution's emoluments clause prohibits federal officials from taking payments from foreign governments, although Trump got around that by ostensibly turning over control of his company to his children while he was in office, although he retained his financial interest in his family-owned companies.

The British government provided the payments after the Turnberry and Trump International resorts reported $8.9 million in losses in 2020. The company's filings partially blamed the losses on Brexit — the U.K.'s withdrawal from the European Union, which Trump ardently supported — saying it had disrupted supply chains, the BBC first reported.

"Brexit has also impacted our business as supply chains have been impacted by availability of drivers and staff, reducing deliveries and availability of certain product lines," one filing said, according to The Independent.

The company also blamed the British government's lockdown policies. Even though 273 workers at the two courses were let go, Eric Trump said in one of the filings that government COVID aid was "helpful to retain as many jobs as possible" but that "uncertainty of the duration of support and the pandemic's sustained impact meant that redundancies were required to prepare the business for the long term effects to the hospitality industry."

A review by The Guardian found that the filings show that the two Scottish resorts owe nearly $180 million to Trump personally, even though their combined assets are currently valued only at about $133 million.

Trump opened the Aberdeenshire resort in 2012 after a legal fight with local residents and environmental activists. It has lost money every year since it opened. The Trump Organization bought Turnberry in 2014 for a reported $60 million and said it has spent $150 million to develop it. That resort has similarly failed to post a profit in any year since the Trump purchase.

Those transactions have raised various suspicions over the years. Though Trump has long financed purchases with borrowed money, he ponied up $60 million in cash for the Turnberry property just as he was defaulting on a $640 million loan from Deutsche Bank, and suing the bank claiming an inability to pay. The Avaaz Foundation, a U.S.-based human rights watchdog group, issued a report in 2019 calling on the Scottish government to use its laws against money-laundering to investigate the purchase.

The Avaaz report suggested that Trump had acquired the Turnberry property during a "cash buying spree" and that his transactions had links to "locations highly conducive to money laundering such as Panama and the former Soviet Union." A Scottish lawmaker in February called for an "unexplained wealth order," which would allow authorities to investigate where the purchase funds had come from, but that motion was defeated in the Scottish parliament. (Although still part of the U.K., Scotland has its own legislature and considerable autonomy in internal matters.) Avaaz asked a Scottish court to force lawmakers to investigate but a judge ruled against that request last month, while leaving the door open for the parliament to approve a probe if its members chose to.

"I wish to make it clear that I express no view whatsoever on the question of whether the [criminal law] requirements were or appeared to be met in the case of President Trump," the judge wrote. "Further, for aught yet seen the Scottish Ministers may still make a UWO application in relation to President Trump's Scottish assets."

Lord Advocate Dorothy Bain, Scotland's top prosecutor, will now decide whether to pursue a criminal investigation against Trump or his company.

"The law may have been clarified, but a cloud of suspicion still hangs over Trump's purchase of Turnberry," Nick Flynn, the legal director for Avaaz, said in a statement. "By any measure, the threshold to pursue a UWO to investigate the purchase has easily been crossed. The Lord Advocate should take urgent action in the interest of the rule of law and transparency, and demand a clear explanation of where the $60m used to buy Turnberry came from."

The Trump Organization dismissed the effort as a "ridiculous charade" and "self-indulgent, baseless nonsense."

Trump, who faces a criminal investigation in Manhattan related to his business practices and a separate probe by the New York state attorney general, is also facing a new criminal investigation by the Westchester County district attorney into the Trump National Golf Club in Briarcliff Manor, New York (about 30 miles north of New York City). Prosecutors are looking at whether the company "misled local officials about the property's value to reduce its taxes," according to The New York Times, which is a subject of inquiry for other prosecutors as well, in relation to other Trump businesses.

Former Trump Organization vice president Michael Cohen, who served prison time after pleading guilty to numerous federal charges, testified to Congress in 2019 that it was routine for the company to provide misleading numbers.

"It was my experience that Mr. Trump inflated his total assets when it served his purposes, such as trying to be listed amongst the wealthiest people in Forbes," Cohen told Congress, "and deflated his assets to reduce his real estate taxes."