Despite all the chaos and discord of 2021, Americans still need each other

Republicans actually know that government can do good. But they have to pretend otherwise most of the time 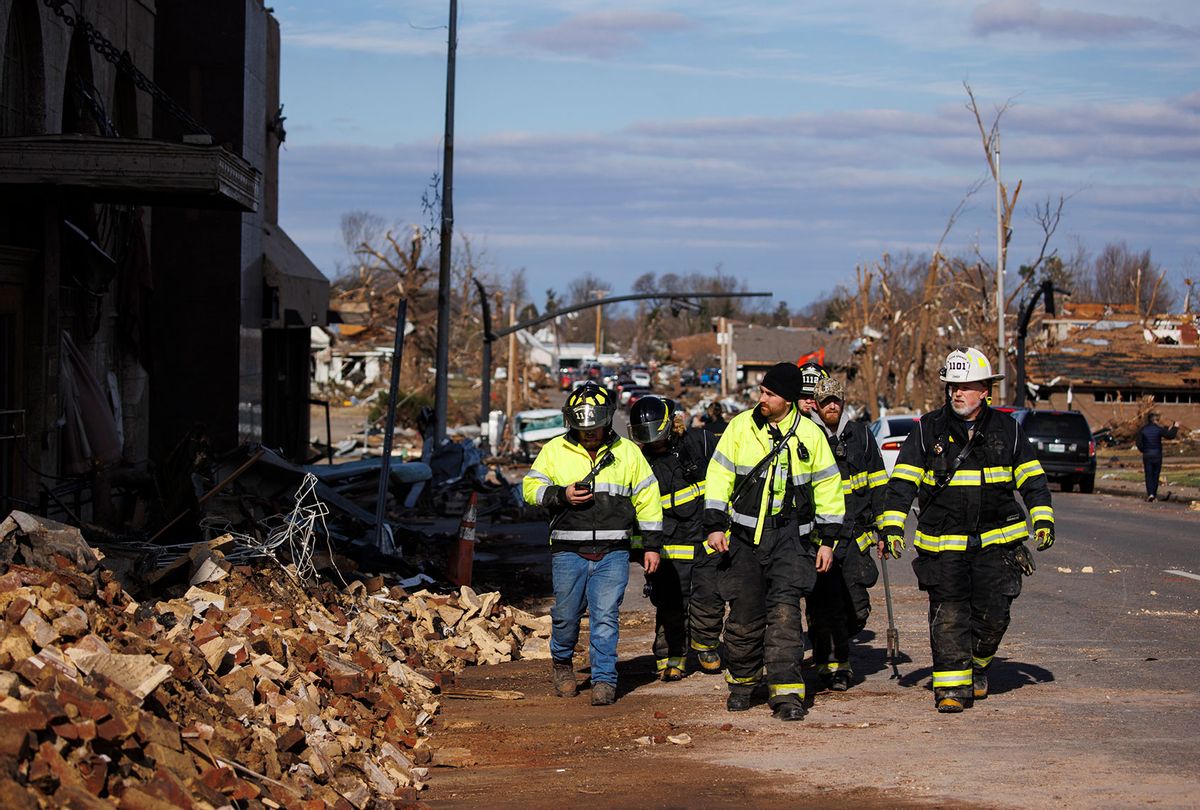 As a number of towns in Kentucky and other communities in the Midwest try to recover from devastating tornadoes, public officials have been lauded, up and down, for praying and getting out and helping.

It's how this thing always goes.

Here's an account from a county judge in Kentucky at a press conference, who stepped up to the microphones after Gov. Andy Beshear, obviously very emotional in the face of the nearly utter devastation and loss of life caused by a tornado that may have stayed on the ground for some 200 miles:

Our local officials right now — you want to know where the heroes are — they're out here in the trenches, trying to find people. That's what they are doing right now. And they don't ask for nothing. They just want to resolve the situation and help somebody.

Fulsome praise, really, for helping in a crisis (when nearly anyone would do so). Americans always step up in a crisis. It may sound harsh, but helping in a crisis is what a public servant does, is paid to do. And public officials are praised most when they are present and seen to be personally involved with rescue efforts.

We have a political crisis in America largely because we have a whole lot of elected officials in one party who have, for a long time now, not considered themselves public servants. Or, after decades of anti-government rhetoric about "starving the beast" and the like, their definition of public servant equates to nothing more than obstructionist. They do the work of the people (the ones who voted for them, anyway) by not doing the work of the people. Yet they are still willing to step up in a weather-related emergency or glom on when the other party votes for infrastructure dollars.

RELATED: Beltway media's moronic coverage of Build Back Better is cheating the nation

We have been shown yet again that whenever there is a tragedy caused by a storm, conservatives ask for prayers and assistance from their fellow citizens (which are already flooding in) and wholeheartedly, even tearfully, praise the response of public officials. Those public officials, Republicans and Democrats alike, don their most official-looking jacket or storm gear and speak of marshaling all the tools of government in the effort to rescue people and to do the hard, years-long work of returning their lives to some level of normalcy.

This ought to remind us we are more alike than we are told to believe. We all believe in rescuing people from a storm; people of a liberal or moderate bent just have a more expansive, more existential definition of what constitutes a storm.

While Republicans believe in less government — unless it supports their political goals, or until they need to profit from it personally or must turn to it during a tragedy — people of liberal and moderate political views (the vast majority of Americans) understand that life is itself a tragedy in slow motion for all of us. We get sick, a job vanishes, a full-time job doesn't pay a living wage or provide benefits, we suffer a disabling injury, we grow old. We find that we need some assistance because (to paraphrase the late Texas Gov. Ann Richards, who most famously said it referring to George H.W. Bush) we were not born on third base, thinking we hit a triple.

As Jill Lepore writes in her superb history of the United States, "These Truths," progressivism actually had its roots not only in Protestantism, encompassing all the ideals of democratic rule, but in late-19th-century populism:

Well, the more things change, the more they stay the same. Progressive thinking exists about social issues among both Democrats and Republicans, as was proved by polling around the Build Back Better plan, with various proposed benefits individually garnering a high degree of support (e.g., adding dental and vision benefits to Medicare, 82% approval; funding for home health care for seniors and people with disabilities, 79%; allowing Medicare to negotiate drug prices, 72%; paid family and medical leave for new parents, 70%; funding for affordable housing, 66%; funding for child care and universal pre-K, 62%).

Although the issue has been thoroughly politicized for decades, many people of both parties believe in the tragedy of environmental degradation and climate change, which directly leads to more superstorms and literal tragedies on the ground.

People of both parties are also well aware of the tragedies in our history — of the enslavement of Black people, the genocide of Native Americans, the Jim Crow era and lynching, the ongoing mistreatment of immigrants, the lengthy period when women endured second-class citizenship — and know we must acknowledge these truths to move forward as a healthy society. Others simply do not like to hear of such things and wish they were not discussed in public. At one time, people with that attitude might blanch or leave the room at such talk; now they scream at school board members and even threaten their lives.

Although the capacity for empathy obviously varies, mostly based on one's upbringing, conservatives in general may not need to be hit by a hurricane or a tornado or an earthquake to recognize the tragedy inherent in all our lives. But conservative politicians seem to recognize the need to display empathy only when it's clear their own voters are in need.

Every time they put on the squall jacket with the governor's seal on the breast and call out the National Guard and marshal the levers of government in the service of their citizens — or, for that matter, when they talk up infrastructure money coming to their state after ostentatiously voting against it — they put the lie to their philosophy that government cannot work for the people. It surely can; outside the context of an obvious disaster (and the condition of our infrastructure more than fits that description), it just depends on which people you're talking about.

Read more on the climate crisis and its ripple effects:

An editor and poet, Kirk Swearingen received his degree in journalism half a lifetime ago from the University of Missouri–Columbia and then took a Greyhound Bus directly into the bowels of early 1980s New York City to study acting. His work has appeared in the Riverfront Times, Delmar, MARGIE, The American Journal of Poetry and Salon. He is currently writing a memoir about his years in New York.