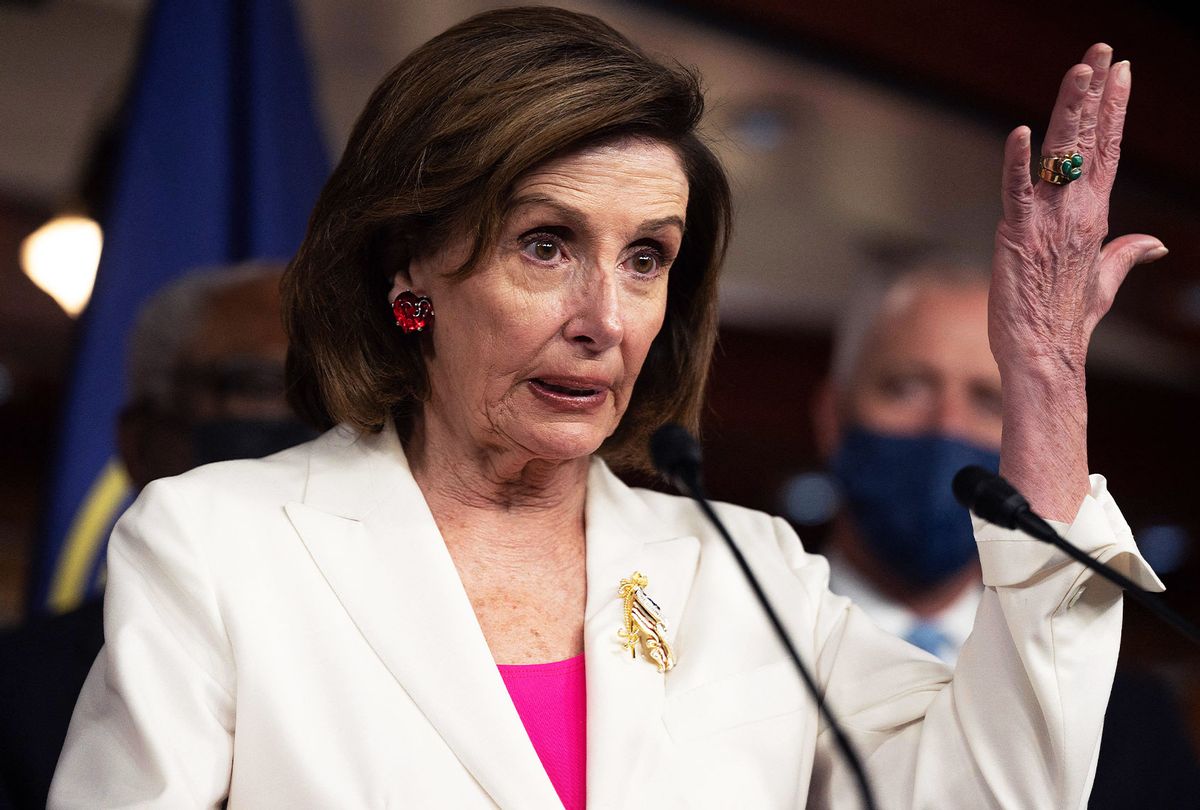 Speaker of the House Nancy Pelosi (C), D-CA, speaks during a news conference with Democratic leaders after the passage of the Build Back Better Act at the US Capitol in Washington, DC, on November 19, 2021. (JIM WATSON/AFP via Getty Images)
--

We're making progress, but it's hard to discern because the reporters covering Washington are so often insular, so inside-the-Beltway, that they have no sense of the historic moment.

There is seismic change all around, yet they're absorbed in the practiced ritual of breathlessly tracking who is up and who is down, because the superficial power tick-tock is what they fixate on. This makes much of our national political reporting disconnected from the rest of the country, which is still in the throes of a pandemic that's on its way to killing a million people, a death toll increased by the government's failed response.

On Friday, several hours after the longest partial lunar eclipse in 580 years, a woman became president of the United States, albeit unofficially and only briefly.

Vice President Kamala Harris' 85-minute reign started when President Biden went under anesthesia for a colonoscopy at 10:10 a.m. and ended at 11:35 a.m. At three hours and 28 minutes, the lunar eclipse lasted longer.

Change often happens in the margins and goes unnoticed.

Right around the time Harris had the launch codes, House Speaker Nancy Pelosi presided over passage in the House of Biden's $1.8 trillion Build Back Better agenda, easily the most significant domestic legislation since the New Deal.

RELATED: Arizona and West Virginia would win big from BBB: Are Manchin and Sinema paying attention?

In hopes of getting the word out, she quickly convened a press conference and was understandably disappointed at how shallow, even moronic, some of the questions were from reporters. At least one of the handful of reporters asking questions appeared more interested in making his colleagues laugh than informing the American people, who have been through an insurrection and a pandemic.

"You used to hold the longest record for the longest floor speech. How do you feel about that being broken?" asked the jokester, referencing the five-hour tirade the night before from Republican Minority Leader Kevin McCarthy.

"That's not what we are here to talk about — this is about serious business," snapped the justifiably agitated speaker, who had just done her part toward delivering universal pre-K, a once-in-a-generation reset on climate change and a realignment of the tax code that uplifts working families by ensuring that the top .01 percent pay their fair share in taxes.

Nobody asked what the legislation would do for the tens of millions of American families that struggle week to week while they perform the essential work that cost tens of thousands their lives.

The questions were either a regurgitation of Republican spin, or inside-baseball tactical queries built around the skeptical spin that House Democrats' efforts would be kneecapped by the Senate.

Speaker Pelosi turned to Rep. Frank Pallone, D-N.J., chair of the powerful Energy and Commerce Committee, to make the Democrats' case and explain just how far along they were toward the finish line.

"The fact of the matter is that over the last few months, particularly in the last few weeks, we have been working with Sens. Manchin and Sinema, but also with the chairs of the committees in the Senate," Pallone said. "We've been basically drilling down by getting Sinema's input, getting Schumer's input — so I do believe the drug pricing provision that you see is it. … I guess there could be some changes, but I don't think they are going to be significant.

"The fact that we have negotiating [prescription drug] pricing and we have savings, as the Congressional Budget Office showed, means this is a provision that saves money and at the same time does a lot in terms of affordability for seniors and others."

"The same would be true with methane — Nancy and I and a group went to Glasgow for the Climate Conference and they were taking international action on methane, so we have very important provisions with regards to methane emissions that was worked on with the senators and worked on with House members over the last few weeks," Pallone said. "This is pretty much it. We are pretty solid at this point and there's no reason this bill could not come back from the Senate with some minor changes."

For months, as the landmark bill was being put together, the only story the media wanted to follow was about the internal drama within the Democratic Party around Manchin and Sinema. In the process, the thread of the story that included exactly what was contained in this historic legislation was lost.

Rep. Bobby Scott, D-Va., chair of the Education and Labor Committee, told reporters he had been working to achieve consensus with his Senate colleagues throughout the process. "We have pretty much agreed with our counterparts in the Senate on child care which will allow parents to go to work," Scott said. "If you are in a low or moderate [income] situation you can't go to work [without it.] Pre-K, which is so valuable for education, is universal."

In the car back from Washington, Rep. Bill Pascrell, D-N.J., was clearly energized despite the marathon session. He said that in many ways the Build Back Better deal marked an improvement over FDR's New Deal, which left out farmworkers and domestic workers of color as part of a deal with Southern Dixiecrats to pass landmark labor protections for everybody else.

Build Back Better will transform jobs in child care and congregate health care settings that have traditionally paid poverty-level wages into living-wage occupations. It provides a pathway of citizenship for the millions of undocumented essential workers who put their health at risk to keep our economy running, making it possible for millions to work from home.

"We know we addressed the inequities here, be they racial or economic — we've learned a lot about ourselves if we listen to what we've learned," Pascrell said. "If we don't, we are going to do the same thing over and over again."

Pascrell believes that how the bill is paid for is every bit as important as what it's paying for, because it shifts the tax burden to the country's highest earners who have seen exponential growth in their wealth during the pandemic. He figures if the government wants workers to return to the workforce, the country's tax policy should make it worth their while.

"In the last 40 years," Pascrell said, the heavy tax lift was on Americans who had to "earn a wage to support their family" while shielding those who own assets. "A fair tax system does not soak the rich — I don't believe in that," he said. "But you certainly have to have the cojones and finally say, 'Pay your way.' Where they have not been paying anything, it's an insult to the system."

But the 12-term New Jersey Democrat says he has no illusions about the headwinds his party faces heading into the 2022 midterms, when traditionally the party that holds the White House loses seats in Congress.

"There's no question in my mind we would lose the election [for the House] if it was tomorrow morning, because of all the gerrymandering that's going on," Pascrell said. "But it's not, and we have a full year to put in place the foundation Joe Biden is trying to build. I am optimistic."

More on the Build Back Better battle and the Biden agenda: