Arizona and West Virginia would win big from BBB: Are Manchin and Sinema paying attention?

Do the two senators who control fate of BBB value “corporations and billionaires" over their own constituents? 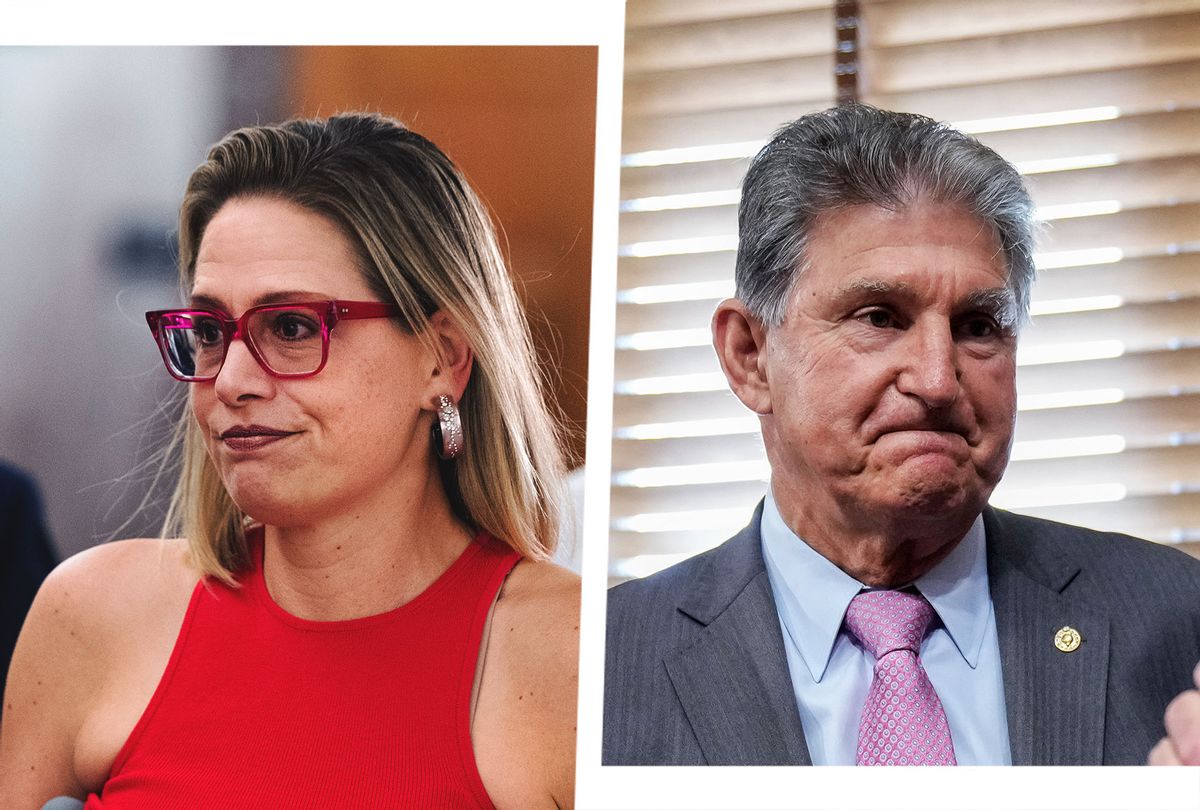 Arizona and West Virginia would stand to gain a great deal from President Biden's Build Back Better package but holdout Sens. Kyrsten Sinema and Joe Manchin — the two "centrist" Democrats who represent those states — still haven't committed to supporting the plan, even after extracting major concessions.

On Friday, the House passed Biden's $1.75 trillion package, including climate measures, health care and affordable housing investments, and child care funding. But the bill still faces major changes in the Senate, where Manchin and Sinema have led the charge to gut Biden's initial $3.5 trillion proposal. Sinema hinted that she still may not be on board with the House version of the bill, telling The Washington Post that it was "not the agreement the president put out in his framework." Manchin has raised "concerns" for months about the size of the bill, the scope of proposed policy changes and the risks of inflation, calling for the party to delay the bill until next year.

Both senators' constituencies have a lot to gain in the bill, according to a new report from the progressive advocacy group Accountable.US. Arizona is home to the largest number of Native Americans of any state in the country, and stands to benefit from more than $5 billion in investments in Native communities in Biden's plan. The plan would also provide more than $4 billion to invest in the country's national parks, a key issue for Sinema. The proposal would also help alleviate West Virginia's growing senior care staff shortages, according to another report from the group. And the paid family and medical leave proposal, which Manchin, opposes would be a boon to the 61% of West Virginia workers who have no access to unpaid leave.

"Sens. Manchin and Sinema may never get this opportunity again to deliver a real chance at a better life and better care for tens of thousands of their constituents," Kyle Herrig, president of Accountable.US, said in a statement to Salon. "It makes no sense to squander this moment to vastly expand access to paid leave and improve child and senior care in their states because of unrelated complaints from a handful of wealthy special interests."

Sinema opposed Biden's initial proposal to invest $3.5 trillion in social programs, health care and measures to combat climate change, pushing to remove proposed tax increases on the wealthy and corporations that would fund much of the plan. Sinema's intervention in the Democrats' proposal to allow Medicare to negotiate drug prices also saved the pharmaceutical industry about $450 billion, at taxpayer expense, while making it more difficult to raise needed revenues. Although Sinema has privately told Democrats that she is "supportive" of the overall plan, according to Politico, she still won't commit to voting for it.

Sinema's constituents have tried to pressure the senator to get on board with the Democrats' agenda as the party tries to hammer out a deal before Thanksgiving. Jonathan Nez, president of the Navajo Nation, the largest Native tribe in the country, urged Congress to pass the BBB, and Diné community leader Lena Fowler wrote an op-ed calling on Sinema to support the plan.

"Some of the Senate chamber's swing votes have said that the cost of the tax and spending package is too high," Fowler wrote, "but the cost is far greater for our communities if we don't act now."

The BBB would invest more than $2.3 billion in Native American health initiatives, including the Indian Health Service, according to Accountable.US. It would provide $1.67 billion for tribal housing, infrastructure and community development, and includes at least $485 million for climate resilience, conservation and drought relief specifically targeting Native communities, $200 million in grants for Native American language educators, and $523 million in other benefits to Native communities.

The BBB also includes over $500 billion to combat climate change, which Sinema herself has called the "most important" part of the package, and billions more for national parks. Arizona has three national parks, including the Grand Canyon, and four national monuments overseen by the Bureau of Land Management. Arizona is the fourth fastest-warming state in the country, according to a recent analysis, and experienced a record number of heat deaths last year. A 2018 study found that temperatures at national parks are increasing at double the national rate. Grand Canyon, one of the most visited national parks in the country, could face water shortages and potential ecosystem collapse due to climate change, according to local researchers. Sinema has said that "Arizona's economy depends on protecting the Grand Canyon and ensuring it remains a safe and stunning part of our state for generations to come."

The National Parks Conservation Association last month called on Congress to pass the BBB to protect public lands from "irrevocable damage due to climate change."

The latest version of the BBB would provide more than $4 billion to the National Park Service and Bureau of Land Management to address nationwide staffing shortages, conservation, habitat restoration, wildfire management and maintenance projects, according to the Accountable.US report.

"National parks and communities are on fire, underwater and inundated by storms. We need climate action now," Chad Lord, the senior director of environmental policy and climate change for the NPCA, said in a statement. "This framework includes historic investments in our clean energy future and climate resilience measures for parks ravaged by flood, fire and drought. It would create jobs and drive investment in communities hit hardest by pollution."

Sinema has largely remained silent in public during BBB negotiations but hit back at critics this week for trying to push her to the left. "No one tells me what to do," she told the Washington Post. In a separate interview with Politico, she criticized Democratic leaders for overpromising on legislation they could not deliver (in part because of Sinema's opposition) but vowed to continue to negotiate in "good faith."

Manchin has also refused to commit to the bill, even though party leaders have acquiesced to many of his demands. In recent weeks he has raised concerns about inflation even though rating agencies say the package would not add to inflationary pressure. But the package includes funding that would be a big help to many people in West Virginia, which is one of the poorest states in the nation and has one of the oldest populations.

West Virginia faces a dire shortage of senior care workers and a "perfect storm" of staffing challenges as a result of worker shortages and burnout, Marty Wright, CEO of the West Virginia Health Care Association, said earlier this month. The COVID pandemic has pushed West Virginia facilities to the "breaking point," he told The Herald-Dispatch last month.

"This historic legislation is the biggest expansion of the social safety net for seniors and their families in five decades," Max Richtman, president of the National Committee to Preserve Social Security and Medicare, said in a statement. "It expands Medicare benefits, lowers prescription drug prices, and adds billions of new dollars for seniors to receive care in their homes and communities — improvements supported by majorities of Americans across party lines.… It is now up to Senate Democrats to get this done."

But the package that passed the House last week could see significant changes in the Senate. The House bill includes four weeks of paid family and medical leave, which Manchin has repeatedly ruled out, saying he supports a paid leave policy but wants it done in a "bipartisan way," rather than in the budget reconciliation bill. "We just can't be spending so much money," he recently argued to paid leave advocates. He has told Democratic colleagues that the bill could hurt small businesses or "invite fraud," The Post reported last month.

West Virginians would greatly benefit from a paid leave program. About 61% of the state's workers are not eligible even for unpaid leave under the Family and Medical Leave Act, according to the West Virginia Center on Budget & Policy, a nonpartisan research organization. The state has a nine-percentage point gap in labor force participation between men and women, in part because of the "lack of family-friendly policies," according to the group. Nationwide, women stand to lose more than $60 billion per year from lower labor force participation and lower work hours due to a lack of family leave protections, according to the National Partnership for Women & Families. This trend could worsen amid the pandemic. West Virginia lost nearly three times as many women to unemployment last year, compared to pre-pandemic levels.

Sen. Kirsten Gillibrand, D-N.Y., and other women senators leading the legislation have continued to lobby Manchin to compromise on the issue, but he has so far refused. Gillibrand is now even reaching out to female Republican senators, such as Susan Collins of Maine and Lisa Murkowski of Alaska, in hopes of securing a bipartisan compromise separate from the BBB as a result of Manchin's refusal, according to Axios.

"It is just the opposite of what a senator from West Virginia ought to be doing right now," Jeffrey Sachs, an economist at Columbia University, said in a news conference earlier this month. "He ought to be championing everything in this legislation and everything that has been cut out because he said that we can't afford it. But he was the one who stopped the way to afford it, which is for rich people to pay something, for heaven's sake.

"Everything is upside down. None of it makes any sense until you remember how big money pays for politics in this country. That's the only thing that enables this to make any sense at all: that money owns our politicians right now."

Manchin and Sinema have both come under fire for their ties to industry groups who have spent millions to kill provisions in the bill. Manchin has taken more than $1.5 million in donations from groups opposed to the BBB, according to an analysis by Accountable.US, while Sinema has taken nearly $1 million.

"Rich corporations and billionaires don't need any more special treatment," Herrig told Salon, "but everyday people in West Virginia and Arizona could benefit tremendously from a more level playing field under Build Back Better — and Manchin and Sinema hold the key."

Read more on Manchin, Sinema, and the Build Back Better battle: