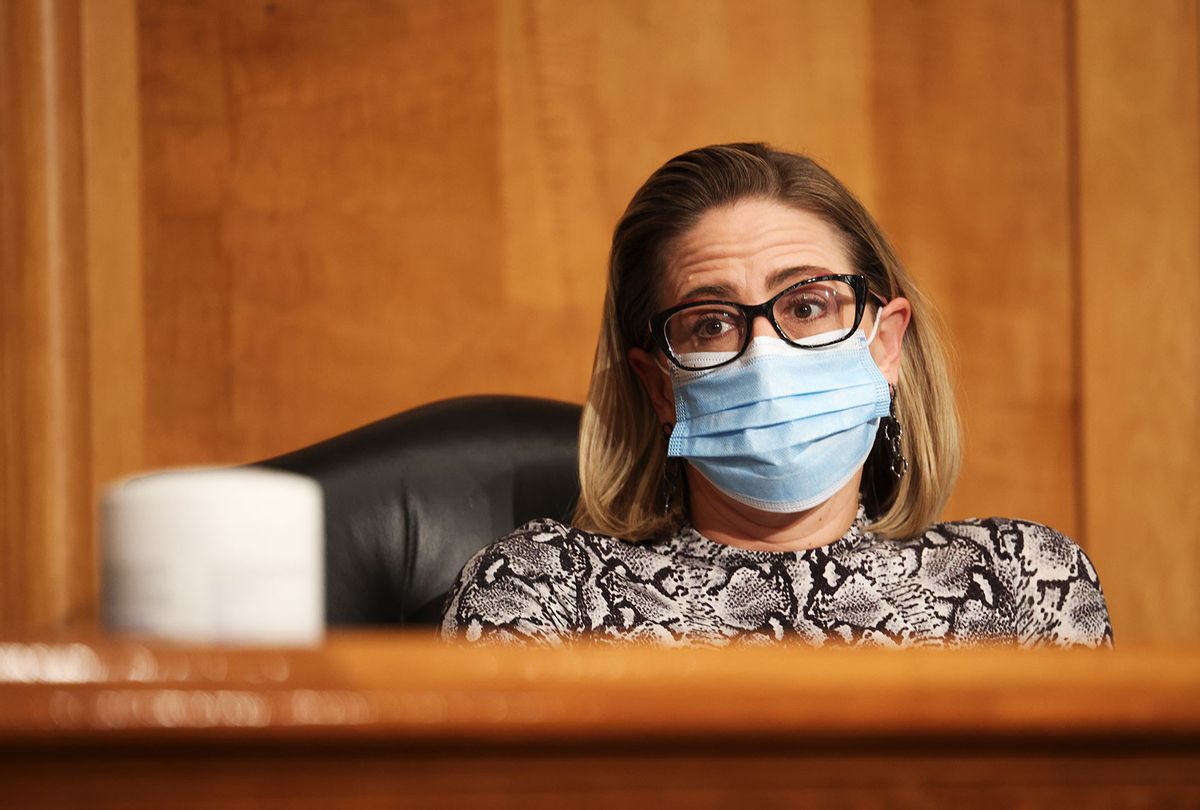 Sen. Kyrsten Sinema, D-Ariz., who has emerged as the biggest single roadblock to President Joe Biden's Build Back Better plan, left Washington this week for a fundraising trip to Europe.

Sinema, who has drawn criticism from Biden and fellow Senate Democrats for being vague about her demands and refusing to budge on her opposition to increased spending and higher taxes, participated in a fundraiser for the Democratic Senatorial Campaign Committee, her spokesman told The New York Times.

A source told the outlet that the fundraiser was in Paris, but it's unclear whether the senator was actually urged to go by party officials. Sinema's office did not say how long she will be away, which countries she is visiting, who is paying for the trip or whether she is also fundraising for her own campaign, though sources told the Times that her team planned to set up meetings in Paris and London. Sen. Gary Peters, D-Mich., the chairman of the DSCC — and like nearly all Democrats, a supporter of Biden's proposal — also traveled to a London fundraiser that charged up to $36,500 per ticket, but Sinema's name did not appear on the invitation for that event.

Lawmakers are barred from raising money from foreign sources, but members of Congress occasionally travel overseas to solicit donations from Americans living abroad, who tend to be affluent and well-connected

Sinema's trip came amid ongoing negotiations over Biden's plan. Sinema and Sen. Joe Manchin, D-W.Va., are the lone Senate holdouts blocking the proposal, which the other 48 Democrats support. (That includes two independents who caucus with Democrats, Angus King of Maine and Bernie Sanders of Vermont.) Sinema spokesman John LaBombard told the Times that she has continued to negotiate.

"So far this week, Senator Sinema has held several calls — including with President Biden, the White House team, Senator Schumer's team, and other Senate and House colleagues — to continue discussions on the proposed budget reconciliation package," he said. "Those conversations are ongoing."

But Biden and Sinema's Senate colleagues have complained that the first-term senator has not done much actual negotiating.

Bernie Sanders, who chairs the Senate Budget Committee, recently criticized Sinema for not telling her colleagues what she would support in the bill.

"Sen. Sinema's position is that she doesn't quote-unquote negotiate publicly," he said last week. "I don't know what that means. We don't know where she's coming from. Tell us what you want."

Other senators have similarly accused Sinema of stonewalling her own party. One unnamed Democratic senator told Politico that Sinema recently said, "I'm not going to share with you or with Schumer or with Pelosi. I have already told the White House what I am willing to do and what I'm not willing to do. I'm not mysterious. It's not that I can't make up my mind. I communicated it to them in detail. They just don't like what they're hearing."

Biden has also been "exasperated" after hours of talks with Sinema and has complained to lawmakers that Sinema doesn't "move" from her position in negotiations and doesn't always "return calls from the White House," according to CNN.

Meanwhile the Arizona senator, who has been a leading recipient of donations from the pharmaceutical industry and corporate groups trying to kill key parts of the bill, has continued to make time to meet with donors.

Last month, Sinema held a fundraiser with five business groups that oppose the bill, charging attendees up to $5,800 to attend a 45-minute event. Earlier this month, Sinema left Washington to go to Arizona, where she attended a ritzy donor "retreat" at a high-end resort and spa, according to the New York Times.

Sinema's refusal to engage members of her own party has extended to her constituents, who have complained that Sinema will not meet with them in her office and has not held a single town hall since her election. Multiple groups have already launched efforts to raise money in support of a Democratic primary challenger in 2024. Tensions have continued to rise after Arizona protesters repeatedly confronted the senator this month, even heckling her during her class at Arizona State University and following her into a campus restroom. The Intercept reported that Sinema teaches an ASU class on fundraising, including topics like how to cultivate "large individual donors," "opportunistic fundraising" and "corporate giving."

Sinema's position has especially perplexed Democrats because her demands are at odds with Manchin's. The West Virginia senator, whose conservative positions are well understood and reasonably consistent, has expressed support for allowing Medicare to negotiate lower prescription drug costs and rolling back at least some of the Trump tax cuts on corporations and the wealthy. Sinema appears to oppose both of those proposals, as do her corporate backers. Democrats view those as crucial elements in funding their key proposals.

"Manchin and Sinema want very different things, both in terms of revenue and programs," a source close to Biden told Politico. "If you just took their currently presented red lines you wouldn't have enough left to get this past progressives in the House and Senate. It wouldn't raise enough money and it wouldn't do enough big programs."

Sinema's poll numbers in Arizona have cratered among Democrats and independents. Although she is still three years away from a possible re-election race, a new poll from Data for Progress on Thursday showed that 70% of prospective primary voters have a negative opinion of Sinema, compared to 85% who have a positive opinion of fellow Sen. Mark Kelly, D-Ariz., who is up for re-election next year. The poll found Sinema trailing all four potential progressive primary challengers included in the survey.

But her position has won over some support among Republican lawmakers, who have praised her for blocking Biden's agenda. Sen. Ted Cruz, R-Texas, this week praised Sinema by name for "standing up to the radical left" by opposing a proposal supported by nearly all congressional Democrats and a strong majority of voters. And Senate Minority Leader Mitch McConnell coordinated his strategy on last week's debt ceiling standoff with Sinema and Manchin, reportedly backing away from his opposition to raising the debt limit in order to take pressure off the two Democrats to vote for filibuster reform.

A group closely tied to McConnell is launching a $10 million ad campaign this week, paid for by undisclosed donors, that attacks Democrats over the $3.5 trillion proposal, according to The Washington Post. The group's Arizona ad targets Kelly, who supports the proposal, and "takes the unusual route of praising … Sinema, a moderate and the favorite Democrat of McConnell."