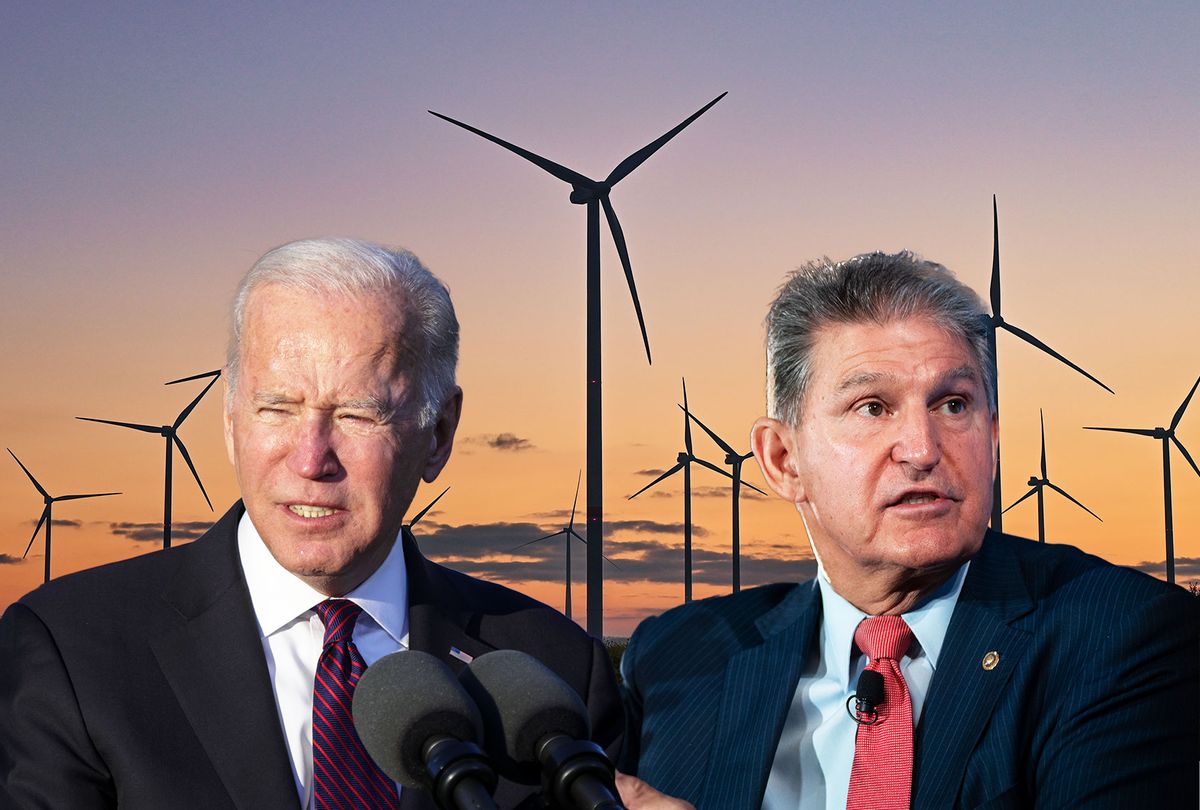 President Joe Biden hadn't even signed the bipartisan infrastructure bill yet when centrist Democratic Sen. Joe Manchin of West Virginia found a new excuse to start reneging on his agreement to vote for the Build Back Better plan. Having already torn up the previous agreement to pass both bills at once, Manchin — whose bad faith is boundless — suddenly discovered a bunch of "concerns" with the social spending bill that he had already forced the White House to cut in half with phony promises that he would support it. His latest excuse to delay until the Build Back Better plan dies completely? Inflation.

"Sen. Joe Manchin III (D-W.Va.) — whose vote, like that of 49 other Senate Democrats, is key to enacting Biden's social spending bill — cited rising inflation as a reason to pause on some parts of the White House's agenda," the Washington Post reported last week. They cited a smarmy statement by Manchin about how from "the grocery store to the gas pump, Americans know the inflation tax is real."

RELATED: What do "centrists" want? Cutting back Biden's agenda isn't moderate — it's reckless

Gas pump? What is it you say about gas pumps, senator? Because yes, it is true that gas pumps are a primary cause of inflation.

Our society is so oil-dependent that a rise in gas prices typically drives up the costs of consumer goods. This was true in the 1970s, when rapidly rising oil prices drove record inflation. And it's true now. On the same day that Manchin was complaining about inflation, the Washington Post also reported that a "main driver of the wave of inflation besetting the country is the price of energy." Gasoline, in particular, is skyrocketing. "Demand for energy — from motorists, truckers, airlines, shipping lines, manufacturers — rebounded from the pandemic slump much more quickly than production has been able to recover."

Too many people competing for a limited supply of oil? Gosh, seems like one way to keep that from happening is to reduce demand for oil — by moving more people towards cleaner forms of energy. This just so happens to be a huge part of the Build Back Better bill! Yes, even the much smaller one that Manchin negotiated and then started to make up excuses not to vote for.

The bill that Manchin supported before he started backpedaling would invest $300 billion on "clean energy investments and deployment, improve energy efficiency, and encourage vehicle electrification," would focus on "high-speed rail projects that would reduce reliance on higher-emission cars and planes; grant programs to integrate low-carbon materials into transportation projects and develop low-emission aviation fuels and technology," and move people to more fuel-efficient or electric cars, while also weatherizing homes and buildings to reduce energy use. All of these measures are primarily meant to reduce carbon emissions, but a nice side benefit is that it reduces consumer demand for fossil fuels — and can help therefore protect against inflation.

"Increasing the share of clean energy in the economy is therefore likely to further moderate, rather than exacerbate, inflationary swings," explains economist Richard Newell in a piece for Barron's. That's because clean energy technologies, such as wind farms or solar panels, "do not rely on traditional fuels of inelastic supply and demand like oil and gas to operate." As Trevor Higgins of Center for American Progress explains, "Indeed, investing in clean energy would directly reduce household energy costs by an average of $500 per year, protect the economy from volatile fossil fuel markets, and slow the pace of climate disruption."

RELATED: "Joe Biden is, frankly, being a coward": A conversation with the White House climate hunger strikers

Economic analysis is great, but there's also common sense here. When people complain about how much it takes to fuel up their cars, shouldn't the immediate answer be that we need fewer people filling up cars in the first place? Everyone knows that fossil fuels are a grotesque addiction Americans would be better off kicking, both for the planet and for their pocketbooks. But every time there's an effort to move towards a more sensible system that does less damage, people like Manchin step in, with their bad faith arguments like "'inflation" and stop the changes.

Manchin likes to pretend it's because he's looking out for his constituents, but they would also benefit from lower and more stable energy costs — and transitioning to green jobs, instead of the slowly collapsing coal industry. No, the sad reality is Manchin's obstinance, like so many obstacles to progress in our society, goes back to old-fashioned corruption.

Manchin is heavily invested in and supported by the fossil fuel industry, and indeed has become quite a wealthy man from dirty fuel. That's no doubt why he doesn't even bother to come up with coherent arguments against even the mildest policy efforts to reduce American reliance on oil and gas. For instance, he's trying to remove a tax incentive from Build Back Better that would reward automakers who produce electric and hybrid cars with union labor. His excuse is, "We shouldn't use everyone's tax dollars to pick winners and losers." This is perhaps a land speed record in both smarm and bad faith.

Manchin absolutely wants to use tax dollars to pick winners and losers. He just wants the winners to be corporate lobbyists, such as those from Toyota, who have been pressuring Manchin to come out against the tax credit. But the American people desperately need to see tax dollars geared towards protecting them — against climate change, against anti-worker policies, and against the vagaries of an oil-dependent economy.

Inflation sucks. There's no use in denying it and Democrats just sound out of touch when they try to wiggle around the issue. But that doesn't mean that Biden and the majority of his party, have to accept this nonsense narrative that Build Back Better would contribute to inflation. (Even inflation hawk Larry Summers admits it wouldn't!) On the contrary, there's a lot in there that could help stabilize the economy. At the top of the list is the clean energy investments. Democrats need to be out front about how fighting climate change and fighting inflation are the same fight, and not let oil-corrupted politicians like Manchin imply otherwise.