What do "centrists" want? Cutting back Biden's agenda isn't moderate — it's reckless 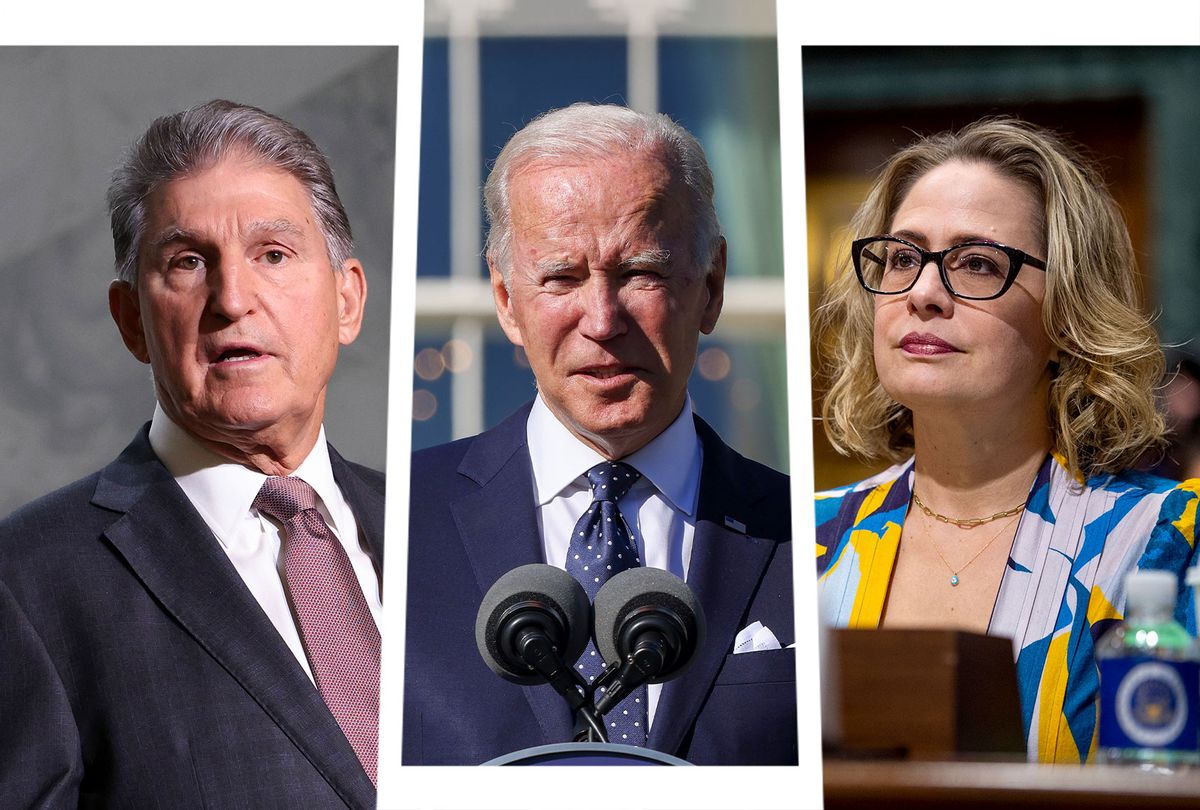 It appears that some version of President Joe Biden's jobs-and-infrastructure plan is still alive and could very well be passed soon, despite the strenuous efforts of some of the shadier Democrats in Congress to kill it. The Washington Post reports that Biden is agreeing to scale back the bill from the original $3.5 trillion price tag to $1.9 trillion, largely to placate Sens. Joe Manchin of West Virginia and Kyrsten Sinema of Arizona, two centrist holdouts who have been vocal about their belief that the original bill is simply too big.

The Post describes Biden's new number as a possible "truce among Democrats' warring left-leaning and moderate factions." This language is misleading, however, for two major reasons. First, the vast majority of Democrats — 96%, to be exact, a group that encompasses both progressive and moderates— support passing Biden's original bill. The holdouts are just a handful of problem children, whose motivations are often more about ego and corruption than ideology. But just as importantly, such framing falsely implies that this is a clash between spendthrift progressives and the more fiscally restrained moderates.

In reality, however, Manchin and Sinema (and their buddies in the House) are the ones being financially irresponsible.

Their demands are short-sighted and often self-serving. They will only end up costing the country far more money, both in the short and long run, than would be spent if this bill were simply passed as-is. Biden's bill is about investing in climate, social, and health care infrastructure the country needs to prosper in the longer term. And without those investments, Americans are going to be facing serious problems that cost way more money to solve.

This isn't just a long term issue, either.

As Kate Riga of Talking Points Memo pointed out on a podcast last week, one way the original bill was going to "bring in a lot of money" was by allowing Medicare to negotiate on drug prices, bringing down the overall price tag of the bill. But Sinema has been blocking this provision, clearly more interested in pleasing her drug industry donors than saving the taxpayers money. This is in line with her opposition to raising corporate taxes to reduce the burden on ordinary taxpayers. None of this is the behavior of a "moderate" who is simply trying to be fiscally responsible. This is the behavior of a corporate sellout who is focused on funneling cash from ordinary people's wallets into the pockets of the already wealthy.

As Axios reports, the price gouging of the drug industry is completely out of control. For instance, Indocin, a common drug used to treat arthritis, cost $198 in 2008. The price has since ballooned to $10,350 a box. This is largely due to the fact that Medicare is blocked from aggressive drug price negotiation, allowing drug companies to charge whatever they want, and bill it to the taxpayer. This is corrupt, exploitative and basically theft — and it's what Sinema is protecting. There's nothing fiscally responsible about that.

Manchin's opposition to provisions to help ease the country off fossil fuels and towards cleaner energy follows the same pattern.

As Rebecca Leber of Vox writes, "There is nothing moderate or debatable about the catastrophic changes that global emissions are wreaking on the climate." The uptick in hurricanes, floods, wildfires and other catastrophic weather events brought by climate change don't just cause immense human suffering. They're incredibly expensive. As CNBC reported in January, the costs from extreme weather events cost $210 billion in 2020 alone, and, by all measures, the situation is rapidly getting worse. Contrast that with the $150 billion over 10 years proposed in the Build Back Better plan to encourage utility companies to switch to renewable energy — money that Manchin opposes spending.

This is clearly not about saving the taxpayers money, especially not in Manchin's home state, where the costs from flooding are sky high and expected to get even worse. The people who stand to profit from inaction are Manchin himself and his buddies in the dirty energy industry. Manchin is heavily invested in coal and has become a millionaire from it. And his campaign coffers are heavily filled by the fossil fuel industry, including donors who are typically more associated with the GOP than the Democrats.

As with Sinema and Big Pharma, Manchin's interests aren't really about fiscal responsibility. It's about enriching the already wealthy at the expense of people who live paycheck to paycheck. Worse, he's sacrificing the future of American children for short term profit.

That's not the only way Manchin, who is 74 years old, is abandoning the futures of the youngest Americans. Manchin is demanding a drastic rollback of proposals meant to help parents afford to raise their children in a healthy manner, from affordable childcare to the child tax credit. Again, the excuse for this is cost, but, as Katrina vanden Heuvel points out in the Washington Post, spending money on kids when they're young ends up saving taxpayers money while also improving prosperity for all.

When we underinvest in children, we pay the price for the rest of their lives, through higher spending on remedial education, reactive health care and criminal justice. Meanwhile, multiple studies have found that universal pre-K programs, for example, result in higher college attendance rates, lower arrest rates, lower welfare usage and lower unemployment — while subsidized child care can lead to improved health as adults and keep parents in the workforce.

True fiscal responsibility requires understanding the importance of smart investment. Money spent on infrastructure, child development and health care now can save Americans from having to face exponentially bigger bills down the road. This is basic common sense, and it's unlikely that Manchin and Sinema are so ignorant as to have never heard the phrase "an ounce of prevention is better than a pound of cure." They just prefer forcing American taxpayers to forgo that ounce of prevention because they and their wealthy benefactors profit more from the pound of cure.

Giving into the demands of these two lobbyist addicts may be the only way for Biden to pass his bill, but it should serve as a reminder that corruption in D.C. is not a fringe concern. It's a financial drain on everyone but the wealthiest Americans who can afford to buy themselves a senator or two.