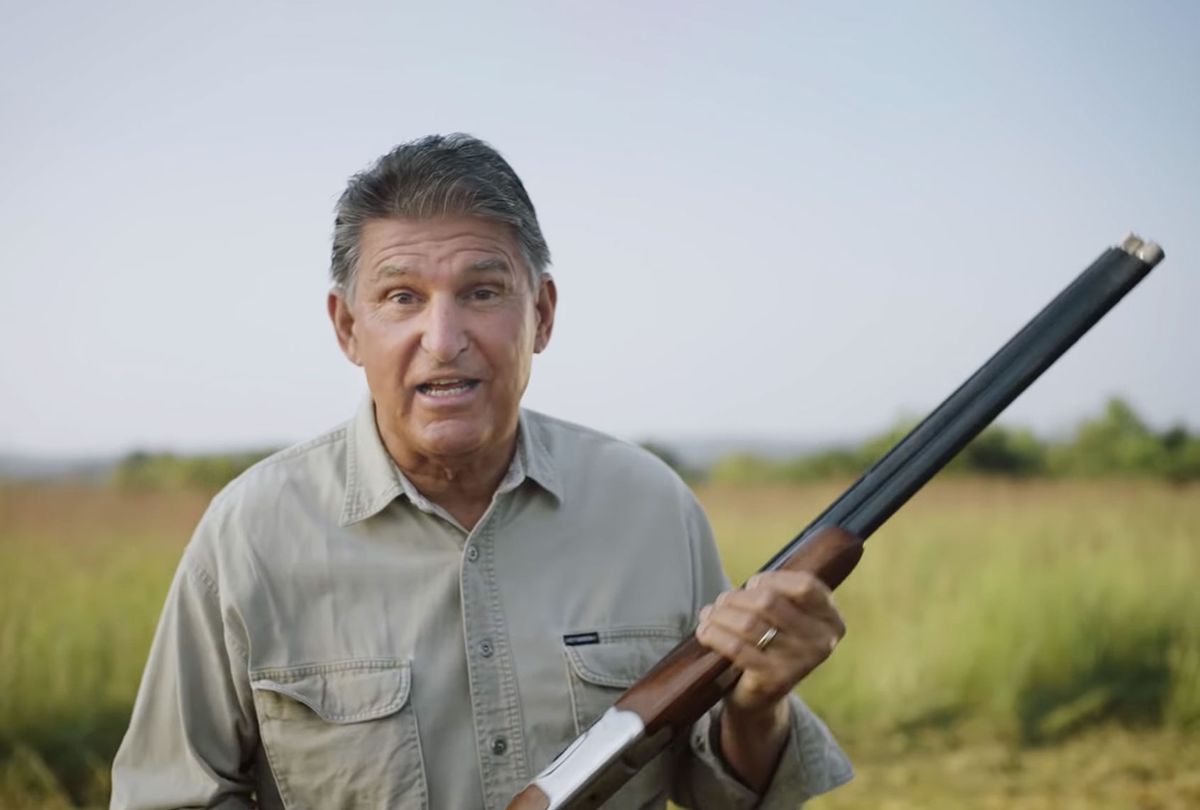 Joe Manchin isn't averse to taking a shotgun to policy he dislikes.

In 2018, the senator starred in a political ad in which he explains how a lawsuit to repeal the Affordable Care Act — something his opponent, state attorney general Patrick Morrisey, was at the time trying to do — would strip health care from numerous West Virginians. Manchin then takes out a shotgun and unloads on the Morrissey lawsuit.

It is also instructive for understanding the political challenge that Manchin faces over the Biden administration's Build Back Better bill – legislation that Manchin has seemingly torpedoed.

As a scholar and native of the state who has long followed West Virginian politics, I know that Manchin is typically deft in balancing support for government programs that will benefit people in the state with the social conservatism that many adhere to. It is what he did in the "Dead Wrong" ad, and it is what he is trying to do now by delivering tangible benefits on some dimensions, while "standing up" to the president and Democratic leadership on others.

What say the lodestar?

There are reasons to suppose that West Virginians would be in favor of many elements contained in Build Back Better, Biden's package of legislation that aims to fix problems ranging from child care costs to climate change.

The legislation contains not only the child tax credit, which would send monthly payments of up to $300 per child to families across the U.S., but also improvements to the Affordable Care Act, upgraded infrastructure for health care and better access to housing. Its largest portion is $555 billion dedicated to climate change — representing the first major legislative action on climate in the U.S.

RELATED: West Virginia unions push Joe Manchin to back down on Build Back Better

In a state where poverty is high, rural health care is sparse and climate change threatens to bring frequent, intense flooding, it seems unimaginable that the senator would fail to support the legislation.

Yet on Dec. 19, 2021, Manchin announced on Fox News that he would not. That Manchin did this on Fox News speaks to the general public sentiment in West Virginia.

It sparked a very public "battle of the Joes" in which Biden maintained that Manchin dealt in bad faith after months of personal cajoling and negotiations by the president. Manchin, for his part, reportedly offered Biden everything in Build Back Better except for the Child Tax Credit.

The fight threatens consequences for man and party. The viability of the razor-thin Democratic majority's ability to govern headed into the 2022 midterms is at stake. But the conflict also poses a major problem for Manchin himself, with Biden using Manchin's opposition to the child tax credit as a political pressure point — publicly shaming the West Virginian for failing to support a measure that would deliver support to many families in his own state.

Normally, major legislative initiatives would each have their own bill. But each would need to pass the Senate with 60 votes in order to avoid a filibuster that could end up killing the bill. To get past that hurdle, Democrats have piled all of Biden's initiatives into what's called a budget reconciliation bill, which only requires a majority of votes to pass — a much lower threshold and one that a united Democratic Party could meet in the Senate.

Yet because legislators must cast a single vote for what is a diverse package, disagreement on one dimension can sink the whole reconciliation bill — even if there is broad agreement on the other proposals. In this case, Manchin wants to jettison the child tax credit, but made an offer that reportedly includes the improvements to the ACA, health care infrastructure, as well as the climate change provisions — remarkable for a senator from a state so dependent on fossil fuels for economic growth and stability.

It is likely Manchin will return to the bargaining table over the next few weeks, absent, or in spite of, the public shaming over the child tax credit from the president.

The purported support for Build Back Better in West Virginia is likely overstated among the electorate — polling is sparse and generally done by supportive organizations — though West Virginians typically are in favor of government programs that benefit them. Winning elections in West Virginia historically entails candidates pledging to bring home benefits to the state. And this is exactly the approach Manchin typically adopts, delivering policy that has majority support, while signaling his fidelity to culture war issues.

Manchin has continually referred to his constituents as his lodestar: "If I can't go back home and explain it, I can't vote for it."

Normally, Manchin gets pressure on social issues from the more liberal wing of the Democratic Party. This criticism from the wider party is fuel for his positioning and policy goals within the state. On such issues, the more criticism he receives from the left, the better. He is deft at pivoting on this pressure to make policy that has general support in the state, such as displayed in the "Dead Wrong" ad.

Furthermore, support in the state for child tax credits means Manchin is left exposed politically in a way that damages his ability to maintain the fragile coalition that he normally relies on. And, despite progressive outcry for a primary challenger, make no mistake about it, no other Democrat could hold that West Virginian seat.

Manchin's seeming obstinance can be understood in two ways. He's either a conservative Democrat failing to get behind the president's legislative agenda or he simply wants to prioritize programs within that agenda that keep to a general spending target.

Manchin's opposition to the child tax credit reflects his concern about how the monthly benefit will affect the budget. Simultaneously, colleagues say he is concerned over how lower-income citizens will spend the money, reportedly worrying about it being spent on drugs.

This second concern echoes a common conservative trope. But if a comment like that might hurt a politician in a liberal state, it is understandable in the context of the West Virginia electorate's social conservatism.

Despite Manchin's comments sparking predictions that his position doomed Build Back Better, it may not be as clear cut as that.

The senator's willingness to accept all the other major provisions in the bill leaves plenty of room for bargaining. If Manchin can find a way to do his customary pivot — supporting the Democratic proposals while satisfying his constituents that he's being socially conservative and standing up to the left — he may well get on board and put away the shotgun.

Read more on West Virginia's man in the middle:

Samuel Workman is professor and director of the Institute for Policy Research and Public Affairs in the John D. “Jay” Rockefeller IV School of Policy and Politics at West Virginia University.