Gangster capitalists and corrupt Republicans have a message for us: Don't look up! 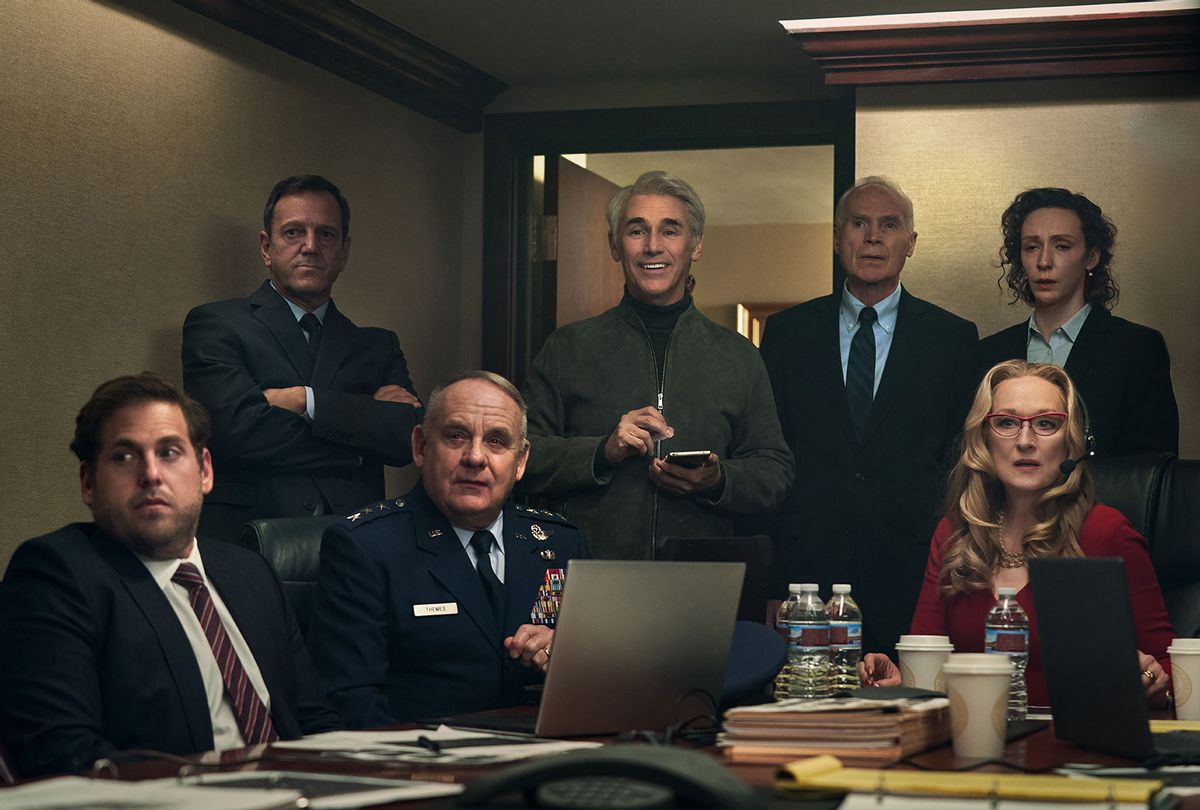 My wife and I recently watched on Netflix the brilliant "Don't Look Up," starring Leonardo DiCaprio and Jennifer Lawrence, written and produced by Adam McKay and David Sirota.

It's being lauded as a metaphor for how we're dealing with climate change in the face of petrobillionaire- and corporate-funded disinformation campaigns, but it's so much more than that:

"Conservatives" on the Supreme Court don't want Americans to look up at how they legalized political bribery with their 1970s Buckley and Bellotti and 2010 Citizens United decisions that have turned politicians into shills for the same billionaires and giant industries that spent millions putting them on the court.

"Small government" freaks don't want you to look up at how trust in our government has fallen from over 80% in the 1960s to less than 30% today, or how that's the direct result of Reagan's "government is not the solution to your problems, it is the problem" hustle, which led to Trumpism and is today tearing America apart.

Republican governors don't want their citizens to look up at how they continue to use racist tropes and dog-whistle appeals to frighten and thus hang onto a majority of the white vote.

Those governors and legislators don't want you to look up at how they're rewriting history and threatening teachers, passing laws that either outright ban teaching the actual history of race relations, slavery and the Civil War, or, as in Florida, empower parents to sue teachers who mention a word about race.

Giant monopolistic corporations don't want you to look up and realize the average American family pays $5,000 a year, on average, more than Canadians or Europeans for everything from cell phone and internet service to airfare and drugs — all because Reagan stopped enforcing the antitrust laws in 1983 and no president since has brought them back.

Big Ag doesn't want you to look up and see that you and your children are being poisoned by chemicals ranging from pesticides and herbicides to hormone-bending plasticizers used in food packaging, thousands of them outlawed in Europe.

Republicans don't want Americans to look up at how they gifted a handful of billionaires and GOP-donor corporations $2 trillion in tax cuts in 2017, while at the same time America is the only country in the developed world where young people carry almost $2 trillion in student debt.

The NRA doesn't want you to look up at how, over just the past two years, 17 million more people — including 5 million more children — now have easy access to guns in their own homes as the result of a Trump-driven explosion of weapons purchases.

They don't want you to look up at how, as a consequence, the U.S. homicide rate went from 6 per 100,000 to 7.8 per 100,000 during that same short period of time, in what CNN labeled "the highest increase recorded in modern history," beating records going all the way back to 1904, when we started keeping them.

Coal-baron legislators don't want us to look up at the poverty across America as they drive their Maseratis and tell us that young West Virginia families will use the child tax credit to "buy crack."

Big Pharma executives don't want us to look up at how they rip us off, as Americans struggle to pay $500 for the same insulin that Canadians can buy for $25

The Sackler family of drug pushers don't want us to look up at how they just walked away with billions and not a single person in the family went to jail over the death of 600,000 Americans from opioids.

Republican secretaries of state don't want us to look up at how they've purged over 17 million people, more than 10 percent of America's active voters, off the voting rolls just between 2016 and 2018.

North Carolina's GOP doesn't want you looking up at how, immediately after five "conservatives" on the Supreme Court gutted the Voting Rights Act, they permanently closed 158 polling places in the 40 counties with the most African American voters just before the 2016 election, producing a 16 percent drop in the Black vote in that state.

Trump and his Trump-humping toadies in Congress don't want America to look up at the treason they incited their followers to commit last Jan. 6, invading the Capitol with Confederate flags and Christian fascist crosses while trying to assassinate Vice President Mike Pence and Speaker Nancy Pelosi.

Giant "health insurance" banksters don't want seniors to look up at how they've already privatized over 40% of Medicare through the "Medicare Advantage" scam George W. Bush gifted them, increasing their profits by tens of billions.

Billionaires don't want Americans to look up at how they're paying less than 3% in income taxes while the rest of us foot the bill for the country.

Religious hustlers don't want us to look up at their mansions and private jets as they run ads for "prayer lines" on TV and push parishioners to vote for politicians who will help them keep their rich lifestyles going as they break the law with no taxes or oversight.

And, of course, the fossil fuel industry doesn't want us to look up at the remote but very real possibility that the global warming they are causing could free ancient methane trapped in permafrost and undersea clathrate beds and trigger a mass extinction event (as DiCaprio and I pointed out in this short video).

DiCaprio, Lawrence, McKay and Sirota's "Don't Look Up" movie is funny, entertaining and sure to provoke useful conversations with friends and family.

It accomplishes this by cleverly satirizing a crisis turned into a disaster by the corrupt power of big money bribing government, amplified by the banality of the infotainment "news" culture Reagan gifted us when he destroyed the Fairness Doctrine as the Murdoch clan came to town.

If ever there was a time when we all need to look up, it's now!

Read more the power of corporate money in politics: