"Don't Look Up," sheeple! Adam McKay's comedy, about a comet that will destroy Earth, fails to hit

Leonardo DiCaprio, J. Law & Meryl Streep can't save Netflix's bloated mess that isn't as smart as it needs to be 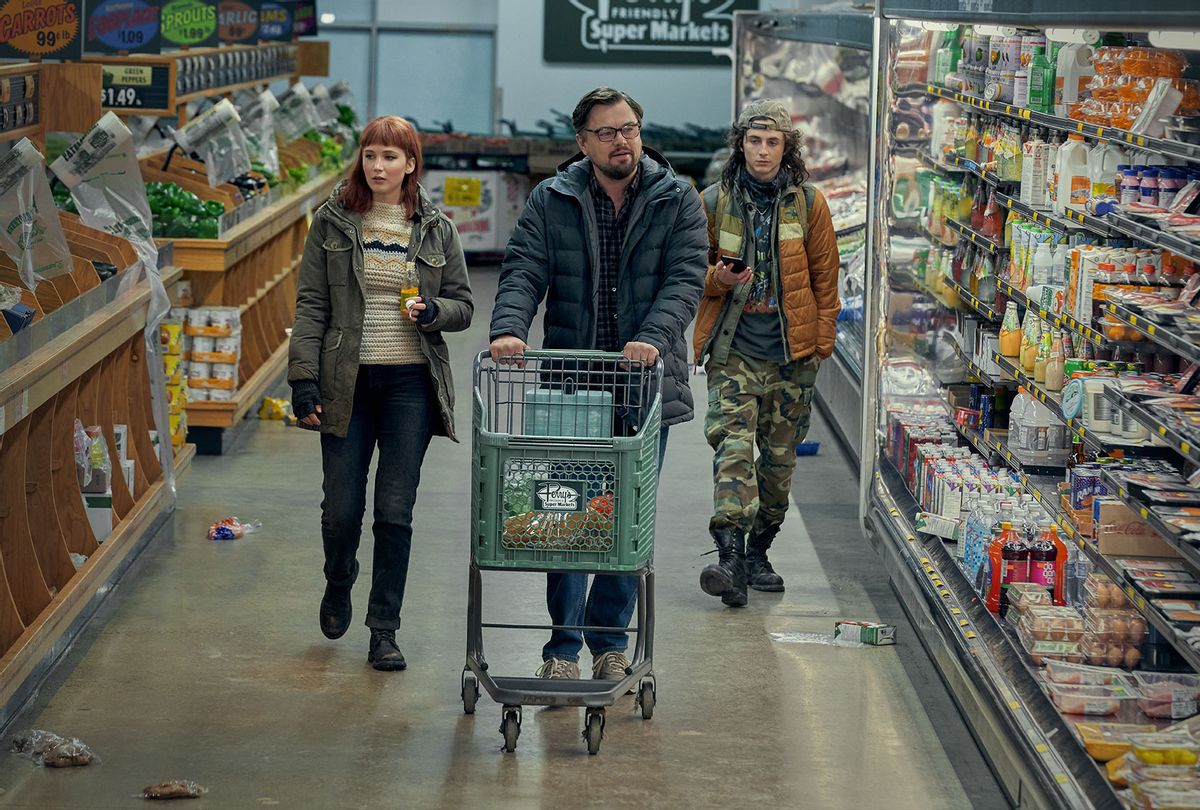 "Don't Look Up," is a toothless satire directed and cowritten (with David Sirota) by Adam McKay. The film aims at targets that are as broad as the width of the comet that PhD student Kate Dibiasky (Jennifer Lawrence) discovers late one night in the laboratory. According to orbital dynamics, earth will be hit — and completely, utterly, and entirely decimated — in an estimated six months and 14 days. Kate and astronomer Dr. Randall Mindy (Leonardo DiCaprio) tell NASA scientist Dr. Clayton "Teddy" Oglethorpe (Rob Morgan), and together they go to tell Madame President Janie Orlean (Meryl Streep). But President Orlean keeps the anxious scientists waiting for more than a day. Once the President does meet with them, she suggests they, well, "sit tight and assess."

This strategy, or lack thereof, infuriates Kate and Dr. Mindy, who talk with the media and go on the popular daytime talk show, "The Daily Rip," hosted by the vapid pair Jack Bremmer (Tyler Perry) and Brie Evantee (Cate Blanchett). But even as they deliver the bad news that, "We're all going to f**king die!," they are met with a shrug of indifference. Their appearance does however, generates a handful of memes and Dr. Mindy becomes "America's sexiest scientist."

Viewers of "Don't Look Up" (which begs to be called "Just Don't Watch!") will shrug if not yawn. It takes nearly 40 minutes of this bloated 140-minute comedy for this much to unfold, and there are far too few laughs. Streep visibly tries to milk her every moment on screen for humor playing a president who could possibly be dumber than Trump. (She's quoted as once having said that "Poor people should pick better lottery numbers," and transmits a photo of her genitalia.)

McKay eventually creates a political divide between those who believe in and support the astronomers' findings and fears, and the working-class supporters of President Orlean, who blindly disregard truth, facts, and science and wear "Don't Look Up" hats. But to what end? The film is obviously mocking the sheeple who deny climate change. Possibly the only funny potshot is when pop singer Riley Bina (Ariana Grande) performs a power ballad with the lyrics, "Get your head out of your ass/and listen to the goddamn qualified scientist."

"Don't Look Up" does have a smattering of amusing moments, but there are far more offensive ones that are meant to be funny. Colonel Ben Drask (Ron Perlman) is seen calling preteen kids "p*ssies" when he's teaching them to exercise on the White House lawn, and he often makes some very insensitive comments. An unfunny running joke excuses his misbehavior because, "he is from a different generation." Alas, no cancel culture humor here.

McKay and Sirota often repeat a joke in the hope that it will generate a laugh. One comic bit involves General Themes (Paul Guilfoyle) charging Kate, Dr. Mindy, and Teddy for snacks that are free. Kate can't seem to let this go, mentioning it several times to various people. It's meant to be deadpan humor, but it is just dead on arrival.

Early on in the film, Peter Isherwell (Mark Rylance), a tech giant of Bash industries, is shown demonstrating a new product. He comes off like a new age Mr. Rogers, which is kind of clever, until his big tech corporation gets in bed with politics. Bash industries tries to break apart the comet so they can greedily mine the billions of dollars of rare minerals it contains, and his unholy alliance with President Orlean is used as a campaign stunt. It lacks inspiration, or as Kate puts it to her evangelical skater boyfriend Yule (Timothée Chalamet) and his pals, "They are not even smart enough to be as evil as you are giving them credit for."

McKay is not being smart enough here either. His film is poorly paced and sloppily edited. Thankfully, he only rarely lapses into the wink-winkiness he employed in "The Big Short" and "Vice" that gives his films a smug, condescending sensibility. The media and social media parodies here are tired, not wired. McKay also misses a real opportunity to emphasize the issue of BIPOC female scientists not being taken seriously. He could have made Kate a young woman of color.

The actors do what they can with the subpar material. Jennifer Lawrence makes a laudable effort as Kate, who is a voice of reason and delights in telling President Orlean that she didn't vote for her, but her childish spats with Orlean's chief of staff/son, Jason (Jonah Hill) are painful. That said, a scene where she screams, "You're going to die! You're going to die," as if she was Oprah giving out cars on TV is dryly funny.

Leonardo DiCaprio gets a Howard Beale in "Network" moment when Dr. Mindy has a meltdown on "The Daily Rip." DiCaprio tries to be comical playing up his characters' crippling anxiety and nerdiness, but he is best in manic mode.

In support, Rob Morgan seems underused, even in a pointed scene where Teddy is arrested, while Mark Rylance delivers a nicely droll turn in what is essentially a thankless role. As President Orlean, La Streep does her typical, mannered look-at-me acting schtick. She tries too hard to be crass — note her tramp stamp. Her nude scene is easily her best moment on screen. Her overplaying pales in comparison to Cate Blanchett's slinky television personality, a riff on one of her characters in "Manifesto." Blanchett is especially priceless giving a "get to know you" speech to Dr. Mindy, and in her reaction when he recounts his life story.

"Don't Look Up" makes a few decent points and gets a chuckle or two, but mostly, it is leaden when it could be farcical, sluggish when it could be screwball. This end of the world comedy should have just been more fun.

"Don't Look Up" makes impact on Netflix on Dec. 24. Watch a trailer for it below, via YouTube.

More stories that might make you feel better (or worse):